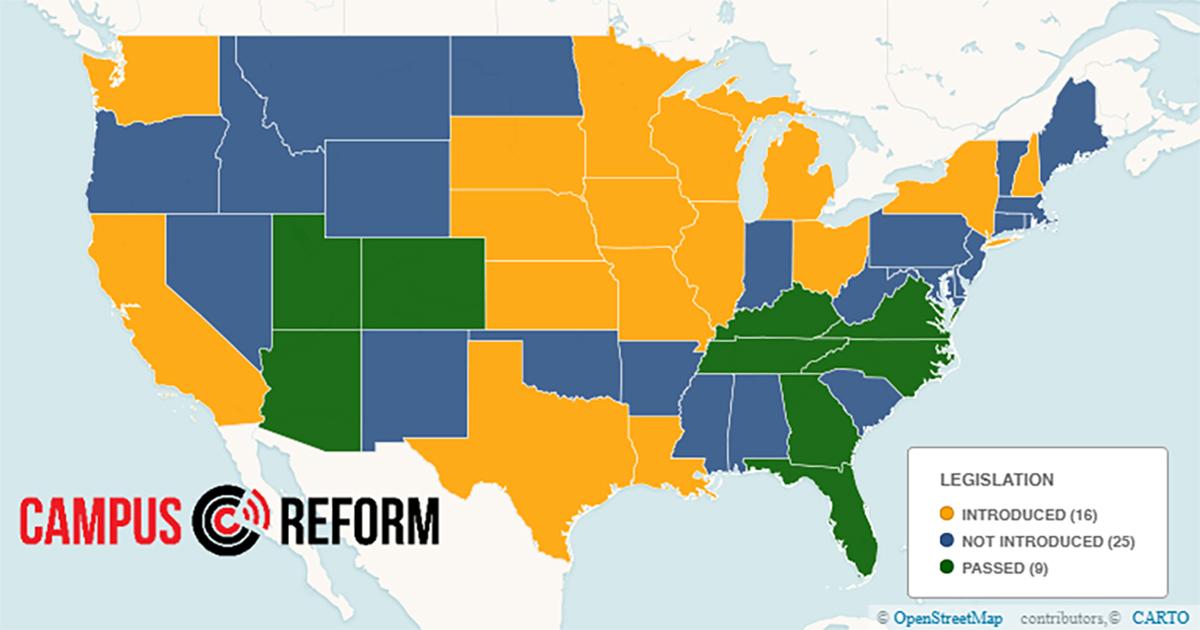 Georgia has become the ninth state in the country to pass free speech legislation, and Louisiana might not be far behind if the legislature can mollify gubernatorial concerns.

Last week, Republican Governor Nathan Deal signed Senate Bill 339, which makes it illegal for any public university in the state to have a so-called “free speech zone,” as the bill states that students are permitted to engage in “spontaneous expressive activity.

"While FIRE is generally pleased that SB 339 has become law in Georgia, we think that there are amendments that should be offered when the legislature reconvenes next year."

Additionally, the bill clears a path for publicly funded institutions of higher education to discipline those who attempt to disrupt a “previously scheduled event,” such as a speaker or a classroom environment.

The bill also would require that the Georgia Board of Regents craft a free speech policy that, among others, assure that universities do not bar students, staff, or individuals from engaging in protected speech, as well as requiring the Board to submit an annual report to the Governor and members of the General Assembly summarizing the state of free speech on Georgia college campuses.

Joe Cohn, a legislative and policy director for the Foundation for Individual Rights in Education (FIRE) told Campus Reform that FIRE is “generally pleased” that Georgia has passed free speech legislation, but still has some reservations about the new law.

“While FIRE is generally pleased that SB 339 has become law in Georgia, we think that there are amendments that should be offered when the legislature reconvenes next year to ensure that the bill lives up to its intention of promoting free speech for all,” said Cohn. “For example, we will be asking lawmakers in next year's session to provide more clarity about when protests lose their statutory protection because they are disruptive.”

FIRE is, however, grateful that the bill does not mandate “minimum punishments” for students who disrupt speeches on campus, as Cohn stated that the punishment should be decided by the school, after a thorough investigation is performed.

Others, though, are less pleased with SB 339, fretting that some provisions might actually serve to stifle speech.

David Moshman, a former professor at the University of Nebraska-Lincoln who once served as president of the Nebraska ACLU, thinks that while the law is written on the presumption that there should be free speech on campus, there are some major flaws with some components.

One of the components of the bill which Moshman feels may be harmful is the provision instructing the Board of Regents to create a free speech policy ensuring that members of the university community are not “shielded” from protected speech.

“Universities may not censor protected speech in order to shield others who find it offensive, but this seems to go beyond that to forbid universities to take any action at all that might ‘shield’ anyone from anything, even in the sense of giving accurate notice of what will happen at an event so students can decide whether to attend,” Moshman told Campus Reform.

In addition, Moshman interprets the bill to require “‘debate of different ideological positions’ as if this were a basic university function on a par with research and teaching,” arguing that “universities should not discriminate on the basis of ideology, but this law goes beyond that to require some sort of ideological affirmative action to attain sufficient ideological diversity.”

Cohn, however, disagreed with Moshman’s assessment, calling his concerns “misplaced” and saying that he doesn’t think the bill has the academic freedom implications that Moshman cited.

In Louisiana, meanwhile, a similar free speech bill has passed the Senate and will now head to the House of Representatives.

The bill aims to eliminate free speech zones, as well as adding protections for “belief-based” student organizations, but may face an obstacle in Democrat Governor John Bel Edwards, who vetoed similar legislation last summer, stating that the bill to protect free speech on college campuses was “overly burdensome.”