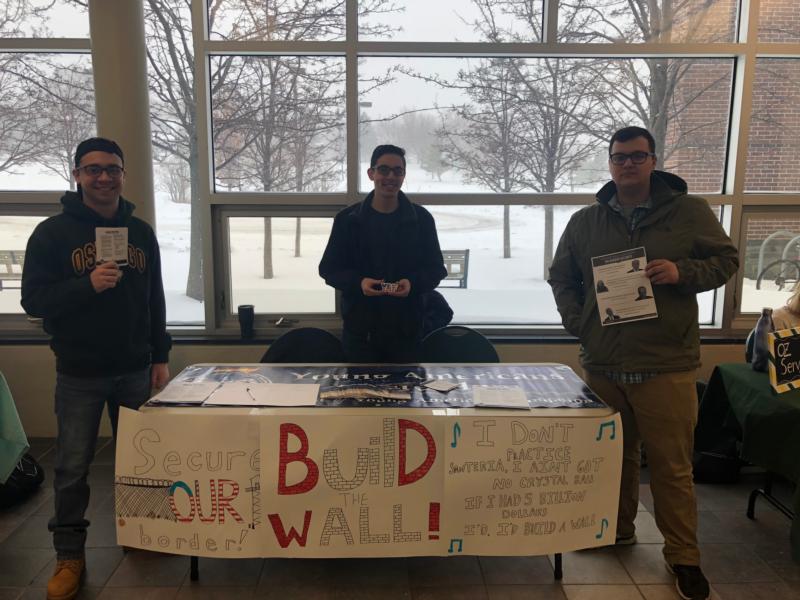 President Donald Trump has received significant backlash over his recent national emergency declaration, which would allow more money for the construction of a wall along the U.S.-Mexico border, but Trump isn't the only one taking heat for his pro-wall stance.  In the president's home state, members of the conservative Young Americans for Freedom chapter at the State University of New York-Oswego received death threats and other harassing messages on social media after hosting a “Build the Wall” table on campus.

The school's YAF chapter posted on Twitter that it “Might be snowy outside but that’s not stopping leftist[s] from getting heated at our Build The Wall Table! #YAFonCampus #WinWithYAF" and was met with furious backlash by social media members.

“I personally have been directly targeted on my personal pages over this and have had people directly harass me online."

Might be snowy outside but that’s not stopping leftist from getting heated at our Build The Wall Table! #YAFonCampus #WinWithYAF pic.twitter.com/lbqfPphNeG

“Fellas if y’all locked in a room with these 3 ugly mf’s and only got 27 bullets which one y’all shootin’ first?” asked one user in response to the YAF table displaying “Secure our Border” and “Build the Wall.

Some Twitter users seemed to agree with this sentiment, as another stated, “Whichever one made the Sublime poster is getting 25/27 bullets.”

Another replied to the SUNY YAF group on Facebook, suggesting that others should have “violated” the table.

“If you go to Oz & you haven’t violated that table as of yet you pu**y idc,” stated Shaffique Griffith in a Facebook post.

“Somebody shoulda boomed at you ni**as,” stated another person on Twitter.

The President of the YAF chapter, Tyler Toomey, told Campus Reform that he even got a direct message on Twitter that read “Count your days.”

The YAF chapter president said that in addition to the threats against his group, people have been harassing him personally.

“I personally have been directly targeted on my personal pages over this and have had people directly harass me online,” Toomey said. “This is unacceptable and we need to come together on both sides of the aisle and agree political debate and discussion is the way to solve these problems not violence and harassment.”

Toomey said that the incident will not deter the group from tabling again, and that the YAF chapter “will come back stronger.”

SUNY-Oswego President Deborah F. Stanley sent a campus-wide email condemning the “violent threats” and stated that students should be more open to respectfully engaging with ideas they may find uncomfortable.

“The principles of free speech and expression are fundamental to an open society. As an academic community, we know that the building blocks of learning are based on the quest for information and analysis in the context of open inquiry, skepticism and debate,” Stanley wrote in the email. “While some ideas and opinions are vastly different from our own and may be an anathema to what we think and believe, I strongly encourage all students, faculty and staff who wish to rebut expressions of others to use their words and voices to add their experiences and understandings to the public 'marketplace of ideas' that is the soul of SUNY Oswego."