Former prof SUES after being heckled while reciting Pledge of Allegiance 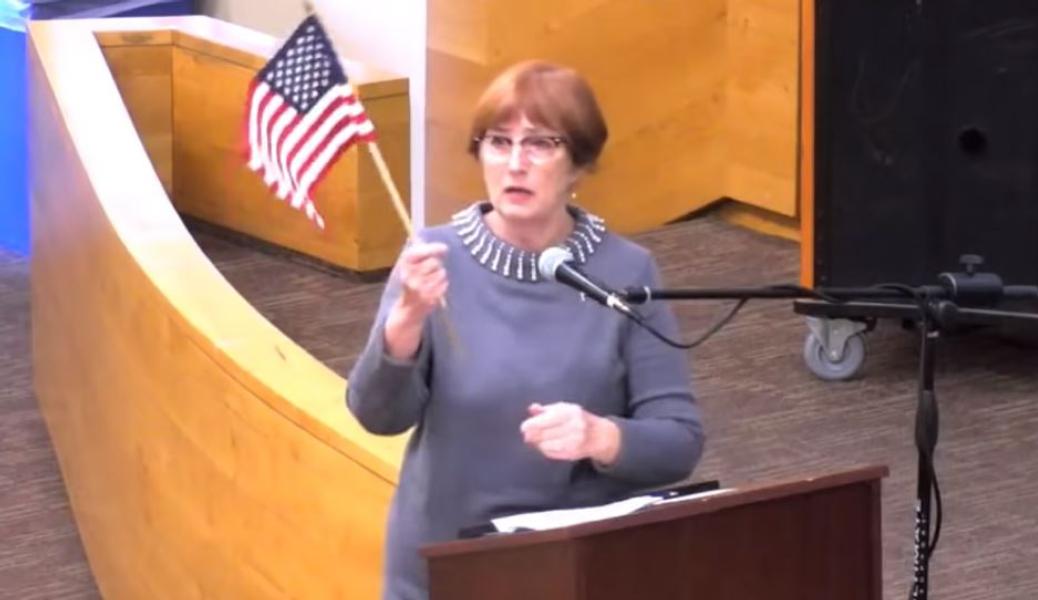 Former community college professor Celeste Barber has sued the Santa Barbara City College Board of Trustees after a spring 2019 incident, in which she alleges that she was heckled during a public board meeting.

According to the complaint, filed by Dhillon Law Group, the SBCC Board of Trustees violated California's Brown Act when it allowed a current professor to shout down Barber while she recited the Pledge of Allegiance, which at the time had been removed from meetings.

“The college had recently changed its policy of reciting the Pledge of Allegiance before the Board of Trustees meetings,” a press release by the Dhillon Group states. “Ms. Barber had applied to speak to the Trustees as to why they should return to the old policy of reciting the pledge. Throughout her comments, Professor Napoleon continually interrupted Barber’s prepared comments. Professor [Raeanne] Napoleon also encouraged others in the audience to also attempt to shout down Barber’s prepared comments.”

Napoleon shouted that the Pledge of Allegiance is “racist,” says the complaint, which also states that Robert Miller, president of the board, failed to remove anyone being disruptive, which is required by California state law.

According to the Brown Act in California Government Code, “ in the event that any meeting is willfully interrupted by a group or groups of persons so as to render the orderly conduct of such meeting unfeasible and order cannot be restored by the removal of individuals who are willfully interrupting the meeting, the members of the legislative body conducting the meeting may order the meeting room cleared and continue in session.”

The complaint alleges that Miller “on numerous occasions called for order but never followed the California Brown Act requirement to remove those who were disrupting the meeting.” Specifically, in addition to naming SBCC itself, the lawsuit names Napoleon, as well as Miller and the president of SBCC, Helen Benjamin.

As a result of the ordeal, the complaint says that it took Barber more than seven minutes to finish a four-minute presentation.

Barber went to the following board meeting, where she was heckled during the public comment section while saying the Pledge of Allegiance.

"On January 24, 2019, the Santa Barbara City College Board of Trustees failed to follow the Brown Act by not removing individuals who were disrupting the meeting," Mark Meuser of Dhillon Law Group, which is representing Barber, told Campus Reform on Tuesday. "By failing to follow California law, the Trustees were violating Mrs. Barber’s Constitutional Right of Free Speech and to Petition her Government by giving a heckler’s veto to whoever had the loudest voice. The Constitution does not give hecklers the right to veto the Constitutional rights of Americans."

"In this lawsuit, we are asking the Court to declare that the Board of Trustees violated Mrs. Barber’s First Amendment rights to Free Speech, Right to Petition the Government, and the California Brown Act. We hope that this lawsuit will be a wakeup call to all government entities that they have a duty to obey the law and that they cannot simply yield to the loudest voice in the room," Dhillon added to Campus Reform.

Santa Barbara City College did not respond to a request for comment in time for publication.