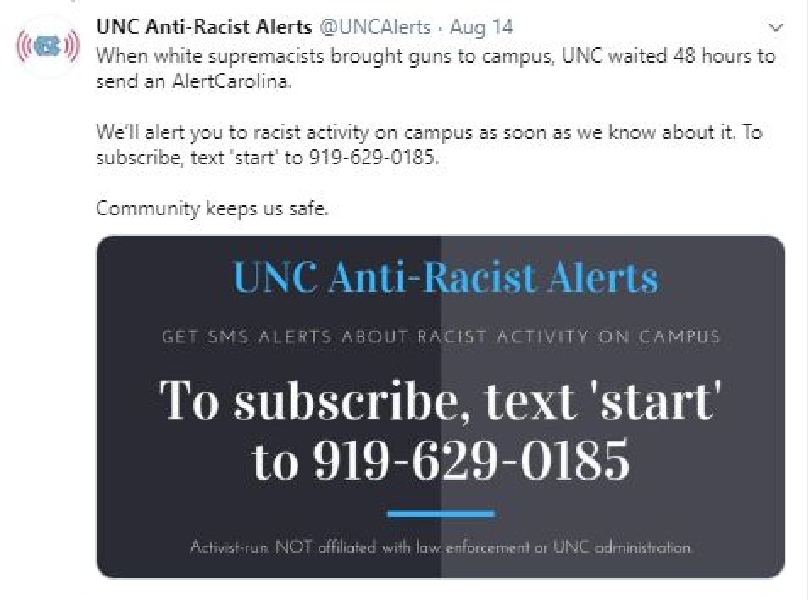 Activist students at the University of North Carolina-Chapel Hill are using an “anti-racist alert” text message system to notify others when individuals and groups with opinions they deem racist set foot on campus.

A graduate student at UNC-Chapel Hill created the system after the on-campus presence of a pro-Confederate group Heirs to the Confederacy, which protested the removal of the university's Silent Sam Confederate monument, as reported by Inside Higher Ed. Two individuals tied to the group were convicted of on-campus vandalism of a memorial in September, according to The News & Observer.

“If one of our friends tells us, ‘Oh I saw some people with Confederate flags over in McCorkle Place,’ then one of us can check"

Ph.D. candidate Lindsay Ayling was upset that UNC had done “absolutely nothing” to alert students about the presence of such groups, including a scenario in which Heirs to the Confederacy leader Lance Spivey unlawfully open-carried a firearm.

“The administration didn’t issue any type of alert and so no one knew that it was happening,” Ayling told CBS17.

Ayling claims that such groups’ presence on campus is “incredibly dangerous” because it is obvious which people “Confederate groups and racist groups” are “most likely to target” when bringing a gun to campus.

Ayling runs the alert system along with a small group of other activists, who work to verify reports.

“If one of our friends tells us, ‘Oh I saw some people with Confederate flags over in McCorkle Place,’ then one of us can check and confirm if it is real,” Ayling explained, according to CBS17.

As of September, Ayling reported that the system had more than 1,000 subscribers.

Students elsewhere have used similar means to warn others about the presence of unwanted individuals on campus. In 2017, students at “Freedom University,” an unofficial institution that serves illegal immigrants, developed a mobile app called “Melt ICE,” meant to alert students when immigration officers set foot on various campuses in the Atlanta area.

At the time of its development, Freedom University Executive Director Laura Emiko Soltis defended the system, stating “there's nothing about avoiding officials. It is making sure citizens and community members know when there's an interaction between ICE and undocumented students.”