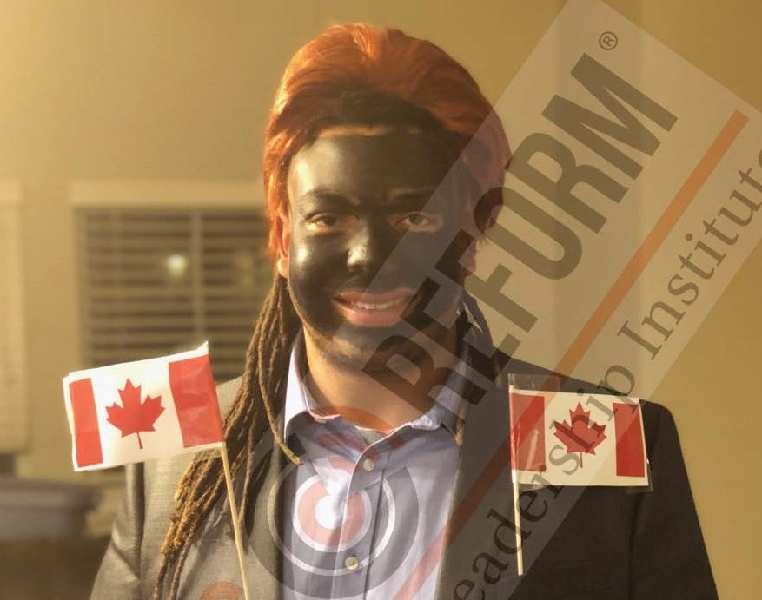 A black Colorado State University student government member was asked to leave a meeting the day before Halloween because he showed up dressed as Canadian Prime Minister Justin Trudeau in blackface. The costume depicted the Canadian Prime Minister who was recently re-elected after old photos surfaced earlier this year showing him dressed in blackface.

"As you can see, I cannot take off my blackface so adding on another shade, in my opinion, doesn't change anything."

Koby Peters, a student government member from the CSU college of engineering, spoke exclusively with Campus Reform Managing Editor Jon Street about the incident. Peters said that other student government leaders voted to have him removed from the meeting without offering him the chance to respond. The leaders who told him to leave, he said, were of a variety of races, including white, black, and Hispanic.

While blackface is considered racist when worn by others, Peters noted the irony of him being attacked for wearing blackface, as a black man.

"As you can see, I cannot take off my blackface so adding on another shade, in my opinion, doesn't change anything," Peters said.

Peters said he didn't wear the costume to offend anyone, but rather to start a discussion.

"I was hoping there would be a lot of discussion because I chose this costume to bring out the hypocrisy that Canada re-elected Justin Trudeau on the back of the endorsement of Barack Obama so we really need to figure out whether blackface is OK or it's not OK. The fact that I was voted out immediately just shows how hypocritical a certain side of the ideology is," Peters said. "I think it's obvious that the reason being that it's been taken so offensively is because I'm a black conservative on campus, which aren't supposed to exist."

But this isn't the first time Peters said he has been singled out as a black conservative student. He told Campus Reform that, in the past, he's been called a nazi, a member of the KKK, and a race-traitor.

As for what happens next, Peters said that the college council that sent him to the student government will hold a meeting Tuesday to decide if he should keep his leadership position. While Peters is optimistic that he will maintain his leadership role, he said that if he does not, "this will definitely show how afraid they are of different ideas."

Meanwhile, student government leaders were not the only ones to speak out against Peters. The CSU chapter of the National Society of Black Engineers sent an email to its members following the incident, referring to it as"another recent issue with disrespect towards people of color."

Notably, the email stated that "this time it included a senator from the College of Engineering for ASCSU, "but it did not mention Peters' race.

Similarly, CSU college of engineering dean David McLean sent an email to students to address "another incident of hate and bias."

Without mentioning in the email the fact that Peters is black, McLean applauded the senators who acted to remove Peters from the meeting.

"This is example to us all on how we must remain steadfast in our commitment to immediately speak out against incidents of hate, bias and racism," McLean wrote. "As a community, we in the College of Engineering abhor racism and bias, and we unequivocally condemn blackface. There is no place for hate in our college or at the university. This behavior does not reflect our values and our Principles of Community of Inclusion, Integrity, Respect, Service and Social Justice."

"Acts of bias and racism, whether committed in ignorance or with malice, are harmful, degrading, and have long-lasting impacts. These acts are against our values, and we must continue to call out and condemn such acts. We must foster a sense of belonging in our college and continue to speak out against instances of hate, aggression and bias," McLean added.