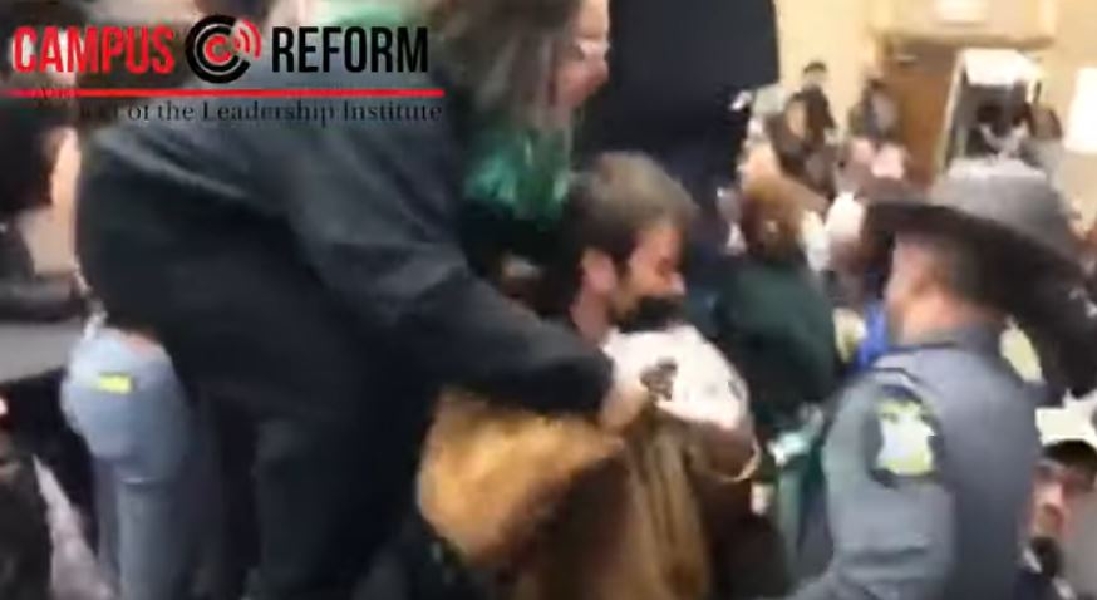 A conservative group at Binghamton University had its event featuring economist Arthur Laffer “shut down” on Monday night.

The College Republicans at Binghamton University in New York State hosted Laffer Monday night but protesters had different plans for the event, as they took up a good portion of seats in the auditorium in which he was slated to speak.

"On Monday, Nov. 18, a speaker sponsored by the College Republicans was disrupted and ultimately prevented from presenting by a large group of students and others," Binghamton University said in a statement via Twitter Tuesday morning. The public institution says that several measures were taken ahead of the event, including the deployment of "a large number of police..."

"Despite those measures," the university continued, "the lecture was immediately disrupted and the speaker was entirely prevented from addressing the audience led by an individual using a bull horn. That individual was arrested, as was another individual who attempted to interfere with police."

Video obtained by Campus Reform shows police escorting one individual out of the venue.

The individual appears to be the same person who hands a bullhorn to one of the disruptive protesters, as seen in other footage shared by New York State Senator Fred Askshar.

I’m disgusted by the chaos we’ve witnessed erupt across the @binghamtonu campus over the past several days. Our college campuses should be places where ideas and peaceful discourse can be shared freely by all individuals, no matter their differing politics or opinions. pic.twitter.com/75QENYMlRv

“Get your hands off of him,” one person is heard shouting in the video.

The College Republicans' tweet stated that the event was shut down within two minutes of starting.

Bobby Walker, chairman of the New York State Federation of College Republicans, said in a statement Tuesday that Antifa was to blame.

"[M]embers of Antifa and the student group Progressive Leaders for Tomorrow (PLOT) began to shout him [Laffer] down and cause an extreme disruption. This organized mob of violent, far-left, radical students then confronted officers of the New York State Police and University Police who were attempting to restore order," Walker said.

“Our [College Republicans] were escorted out by police officers with Dr. Laffer. The ongoing violence towards conservative students is an affront to our 1st amend. rights. We will NOT be silenced by masked mobs of radicals,” the group said in a tweet Monday night.

On Tuesday, Walker stated that "a phalanx of State Police rushed Dr. Laffer and College Republican leadership through a back service entrance of the auditorium for their safety while the auditorium was brought under control."

Monday's incident comes less than one week after a separate incident at Binghamton in which conservative students were taunted by leftist students as they tried to promote the event with Laffer.

Campus Reform reported on that incident Friday, which also resulted in police presence.