Binghamton CRs dealt ANOTHER blow after being taunted, shut down by leftists 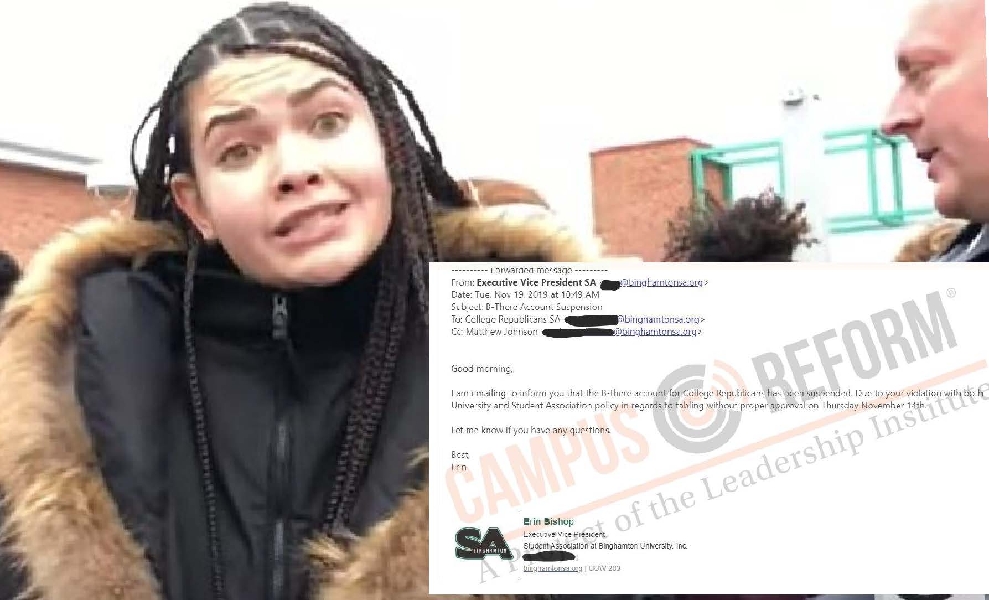 The College Republicans at Binghamton University says the Student Government Association has suspended its ability to organize and hold meetings, adding insult to injury after a week of dramatic protest against conservatives.

A large group of leftist protesters congregated Wednesday on the New York campus around a table being run by the College Republicans to promote an upcoming event featuring  Arthur Laffer, a former economic advisor to President Ronald Reagan as well as to President Donald Trump's 2016 campaign.

"This is what our Founding Fathers were fighting against."

As Campus Reform reported, when Laffer arrived on campus Monday, his speech was shut down in minutes by leftist students who clashed with police. Now, the student government has struck another crushing blow against the College Republicans at Binghamton, sending the group an email on Tuesday revoking the group's access to the online system that allows them to reserve campus meeting rooms.

"This morning, we received notification that the Student Association has barred us from making room reservations, and canceled all room reservations that we had. For this reason, tonight's meeting will be canceled. We apologize for letting you know on such short notice, as this came as a surprise to us as well. We will keep you updated with developments and information about future meetings," the group wrote on Facebook.

“What the SA decided to do today was issue a suspension of our access to rooms and events and tabling,” Restuccia explained. “Without a room, you can’t organize on campus. We can’t hold meetings anymore.”

He went on to condemn the university's administration for allowing student government to silence conservative voices, characterizing this as an attack on the First Amendment.

“This is what our Founding Fathers were fighting against,” he told Campus Reform.

According to an email obtained by Campus Reform, the student who serves as SA’s executive vice president, Erin Bishop, told the College Republicans that they were suspended for a failure to seek student government approval before handing out materials Wednesday to promote Laffer’s speech. Restuccia disputes this.

“We didn’t have a permit to table because of [the table’s location on] public property, and also one of the groups that was with us wasn’t SA funded, therefore they didn’t need a permit,” he said.

Restuccia and other Binghamton CRs aren’t ready to give up yet. “Right now, after everything that happened...we’re looking at legal action through the Young Americans Foundation… we are looking at all avenues,” he told Campus Reform.

Attacks like this one against conservative students are “just going to get worse the more people ignore it,” Bobby Walker, chairman of the Federation of New York College Republicans, told Campus Reform.