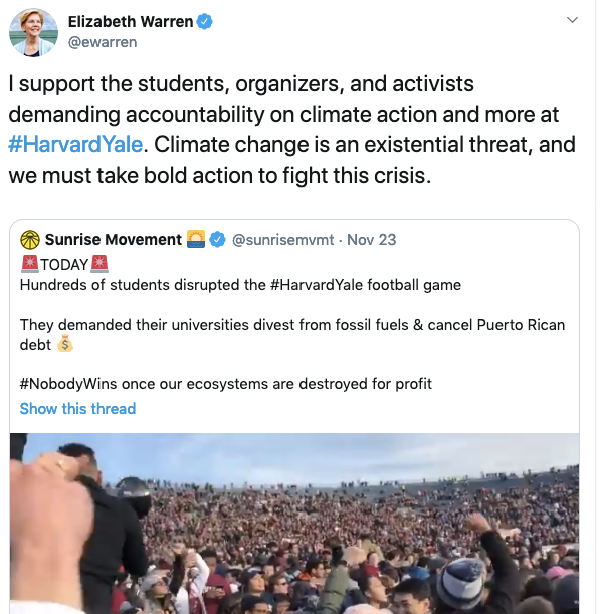 As Yale and Harvard condemn the climate protests that delayed a football game between the two Ivy League universities Saturday, Democrat 2020 candidates have chosen to speak out in support of those who stormed the field.

“It is regrettable that the orchestrated protest came during a time when fellow students were participating in a collegiate career-defining contest..."

The Harvard Crimson reported Sunday that three minutes before halftime of the game, several students charged the field for a sit-in protest yelling “Divest!” and bearing signs “Yalies for Climate Justice.”

Hundreds more spectators joined the protesters on the field. The game was already delayed by a half-hour before Yale and New Haven police intervened. Outside the stadium, protesters chanted “Disclose, Divest, or this Will be our Death!”

Fossil Free Yale has started a Go Fund Me Page to raise $20,000 in legal fees, reaching half of its goal just one day after the protest occurred.

In an email conversation, Ive League spokesperson Matthew Planto told The Harvard Crimson that while the university supports the right to demonstrate, it was “regrettable” it took place during the college football game.

“It is regrettable that the orchestrated protest came during a time when fellow students were participating in a collegiate career-defining contest and an annual tradition when thousands gather from around the world to enjoy and celebrate the storied traditions of both football programs and universities," Planto wrote.

Harvard spokeswoman Rachel Dane said that Harvard does not use their endowment for political pursuits or purposes and that the university “respectfully disagree[s]” with the protesters.

“While we agree on the urgency of this global challenge, we respectfully disagree with divestment activists on the means by which a university should confront it," Dane wrote. "Universities like Harvard have a crucial role to play in tackling climate change and Harvard is fully committed to leadership in this area through research, education, community engagement, dramatically reducing its own carbon footprint, and using our campus as a testbed for piloting and proving solutions."

[RELATED: Harvard researchers use US gov money to give Twitter power to...a tree?]

Many Politicians, including 2020 Democrat presidential candidates, have tweeted in support of the protesters. Senator Ed Markey (D-MA) tweeted Saturday to thank the protesters for their "leadership."

Campus Reform reached out to the Harvard and Yale police departments as well as the schools but did not receive a response in time for publication.