One instructor allegedly called YAF a “white supremacist group," according to emails released by the group. 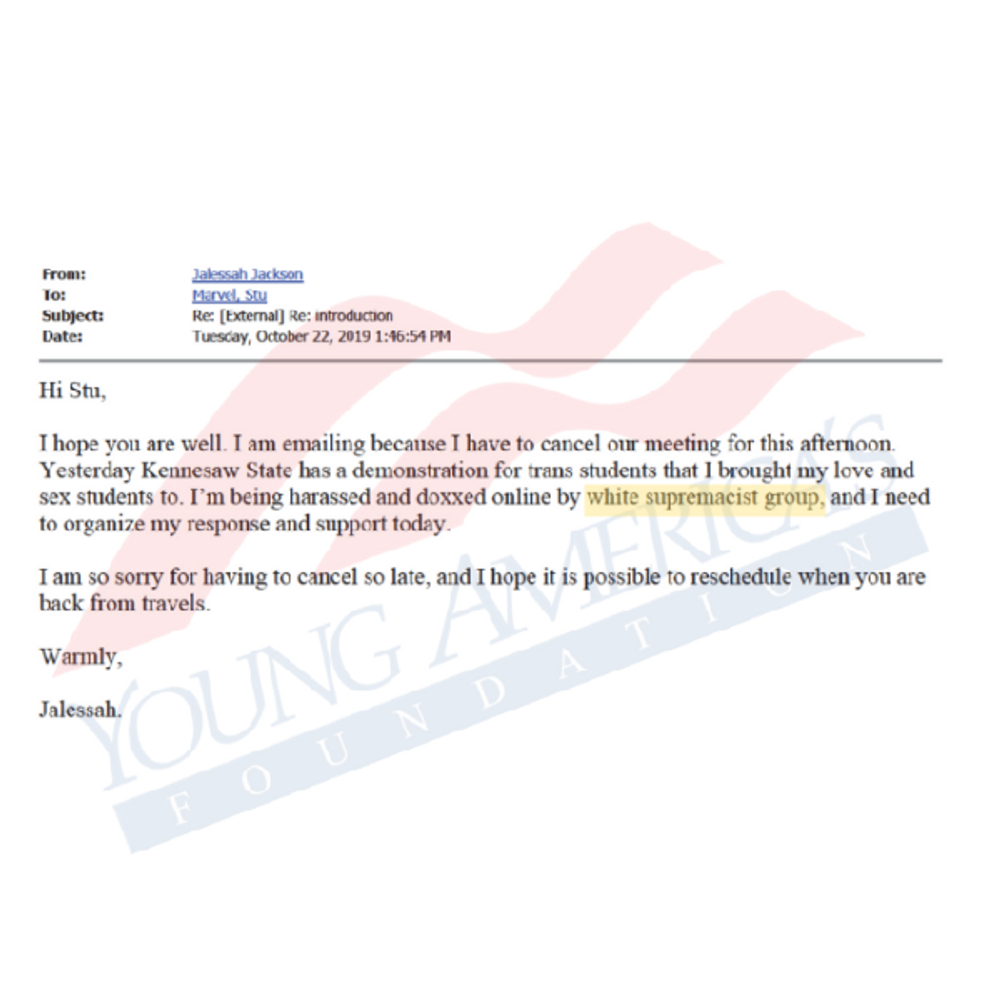 Newly released emails allegedly show a Kennesaw State University instructor calling Young Americans for Freedom a “white supremacist group” after she initially planned to require her students to attend a protest against a speech by conservative commentator Michael Knowles, an event hosted by YAF.

Emails released by the Young America's Foundation appear to show how KSU handled a situation with a Women and Gender Studies Instructor, Jalessah Jackson, who first said that her students were “expected” to attend a protest against a KSU YAF event, which hosted Michael Knowles on Oct. 21, as reported by Campus Reform.

Campus Reform has not yet confirmed the authenticity of these emails. The university did not respond to a request for comment on the emails.

Shortly after Jackson sent the email to her “Love and Sex” class, the emails published by YAF allegedly show that dean of the College of Humanities and Social Sciences Shawn Long emailed Jackson and told her that she could not force students to attend the protest.

“Requiring students to attend a student-led freedom of expression demonstration on the Campus Green in lieu of class may violate KSU policy,” Long wrote. “Therefore, to the extent you have not already done so, please clarify to your students that attendance at this event is not mandatory, and that they will not be penalized if they decline to attend the demonstration.”

When contacted by YAF, the professor backtracked on her initial email to students, stating that “attendance will not be taken for today’s class,” as evidence that presence at the protest would not be mandatory.

According to the email published by YAF, Jackson also emailed another university employee, explaining why she had to cancel their meeting.

“I’m being harassed and doxxed online by a white supremacist group, and I need to organize my response and support today,” Jackson wrote.

Another email sent by an administrative assistant on behalf of Robbie Lieberman, chair of the Interdisciplinary Studies Department, encouraged faculty to attend the same student-organized protest hosted by the Kennesaw Pride Alliance and KSUnited.

Ellie Hicks, vice-chairwoman for the KSU YAF chapter told Campus Reform that the emails show a lack of respect for conservative students.

“No one, as far as I saw, told the professor she was morally wrong for saying the things she did about my YAF chapter, including insinuating that we are white supremacists and transphobic, only that she should be careful due to her email suggesting that ‘expecting’ students to attend a protest instead of class may violate our schools policies,” Hicks said.

Hicks added that no one from the university has apologized to her group following the emails being released.