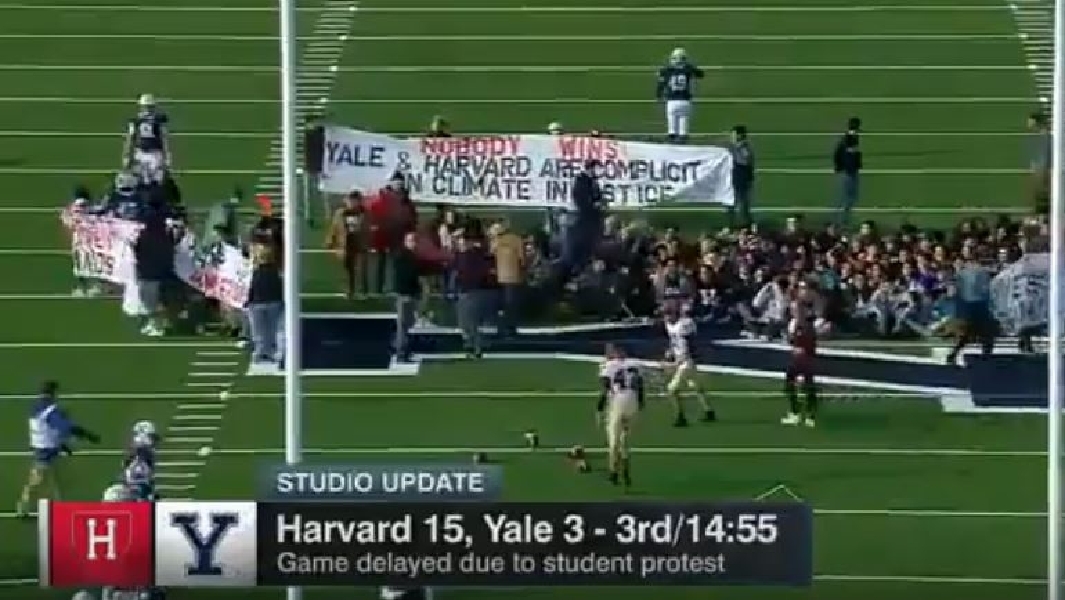 At least 29 protesters who rushed the field to protest divestment during the Nov. 23 Harvard-Yale football game must now complete community service and reappear in front of the Connecticut judge in January.

During the Nov. 23 game, climate protesters from Harvard and Yale stormed the field, which forced game officials to delay the game. Specifically, Fossil Free Yale and Divest Harvard stormed the field and demanded that the individual schools cancel their holdings on Puerto Rican debt as well as stop their fossil fuel investments.

“Nobody wins. Yale and Harvard are complicit in climate injustice,” stated one of the posters held up protesters, while some simply performed a sit-in on the field. Fifty people were charged with disorderly conduct after officials first asked them to leave the field, according to The Crimson.

According to that report, the lawyer for the protesters said that his job is to “make sure that every student arrested and given a summons gets out of this without any record.”

As long as the students meet the conditions that the judge set, the charges will be dropped.

Following the protest, multiple Democrats showed their support for the event on social media.

“When people come together to stand up for justice, we win. Congratulations to the young people demanding a sustainable future for our planet. We are with you in this fight,” Democrat presidential candidate Sen. Bernie Sanders said.

Julian Castro even  saidhe was “inspired” by the protesters. Tom Steyer also said that he “was thrilled,” according to a tweet from a Quad-City Times reporter. Some attendees were not so enthusiastic about the protesters disrupting the game, however, as some yelled “Drag them off the field!,” according to The New York Times.

As the protest went longer and longer, more and more fans decided to rush the field, which eventually had to be broken up by police officers, according to the report.

Campus Reform contacted Harvard and Yale to ask if the schools will impose additional sanctions but did not receive responses.