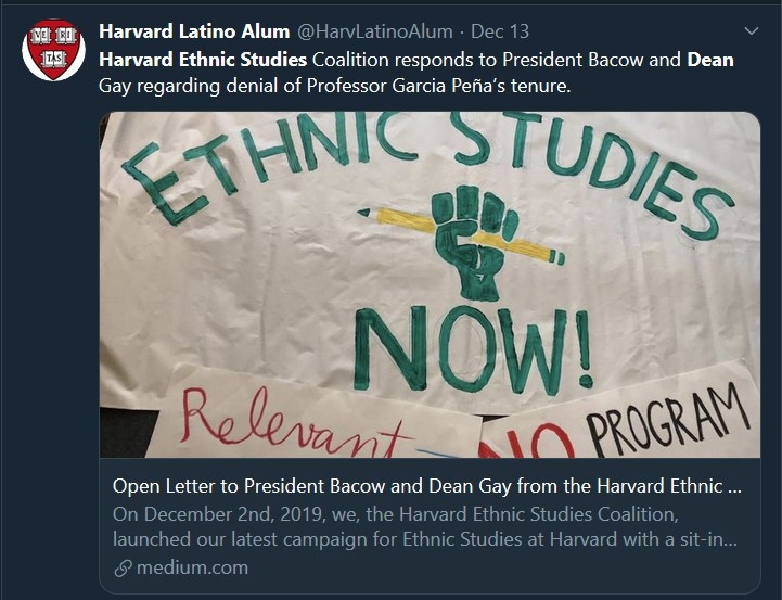 Last week, Harvard dean took a seat on the floor to listen to and write down the demands of a group of protestors who were demanding structural changes to the university, including the addition of an entire department and tenure for a particular professor based on her race.

On December 12, about 50 students at Harvard University protested in the Office of Admissions and Financial Aid. One student was speaking through a megaphone while others were holding banners saying things like, “Ethnic Studies Now!” The students’ grievances included the recent denying of tenure to Romance Languages and Literatures associate professor Lorgia García-Peña, along with a demand for the creation of an ethnic studies department at Harvard University.

The students claimed that denying tenure to the professor was an example of “unjust actions taken against scholars of color to keep them silenced and powerless.”

Dean of the College Rakesh Khurana sat down in the hallway during the protest to take notes on the students' concerns.

“Everybody on our campus deserves to be heard,” he said. “And I'm trying to understand what is important to them and see what we can do to continually strengthen dialogue and communication with the students,” the dean later said.

In a letter to the administration, students complained about the lack of an ethnic studies department and claimed that it can be directly tied to the denial of tenure to Garcia Peña. The students claimed that denying tenure to the professor was an example of “unjust actions taken against scholars of color to keep them silenced and powerless.”

“We believe these issues are not separate. We can’t separate Professor Garcia Peña’s tenure denial from the larger fight for Ethnic Studies at this institution, despite what the administration says,” wrote the students. “Dean Gay has publicly confirmed that she has the structural power to create an Ethnic Studies department immediately but refuses to do so before hiring faculty to teach and advise through it. We believe that the hiring of professors and the creation of a department must be simultaneous and non-negotiable.”

Regarding ethnic studies, student Catherine Ho complained about the status quo by stating, “I am tired of Harvard using my story without giving me ethnic studies so I can fully understand what my story even means.” Ho was referencing the fact that despite Harvard having race-conscious admissions policies, the curriculum and instructors still do not adequately reflect that diversity.

Another student, Liren Ma, explained the supposed need for ethnic studies at Harvard, saying, "You know Trump, but everything else that's going on,” continuing, "Really makes me think about all my classmates at Harvard who, if they had a little bit more exposure to some of the things you learn at ethnic studies class, maybe in 10, 20, 30 years they won't repeat the same mistakes people from Harvard 10, 20, 30 years ago made and are continuing to make in the positions of power that they've been given now."

Harvard currently offers classes in ethnic studies, just not in a department dedicated specifically to the field of study. These courses are apparently insufficient for the protesting students. Dean of the Faculty of Arts and Sciences Claudine Gay, wrote that she has been working for “several years now” to develop the ethnic studies courses offered at Harvard by bringing more faculty to teach them. She also said that “Even after this search [for additional faculty] is complete, we will continue our efforts to diversify the curriculum.”

Harvard University declined to comment on the student protest or the tenure decisions of individual faculty members.