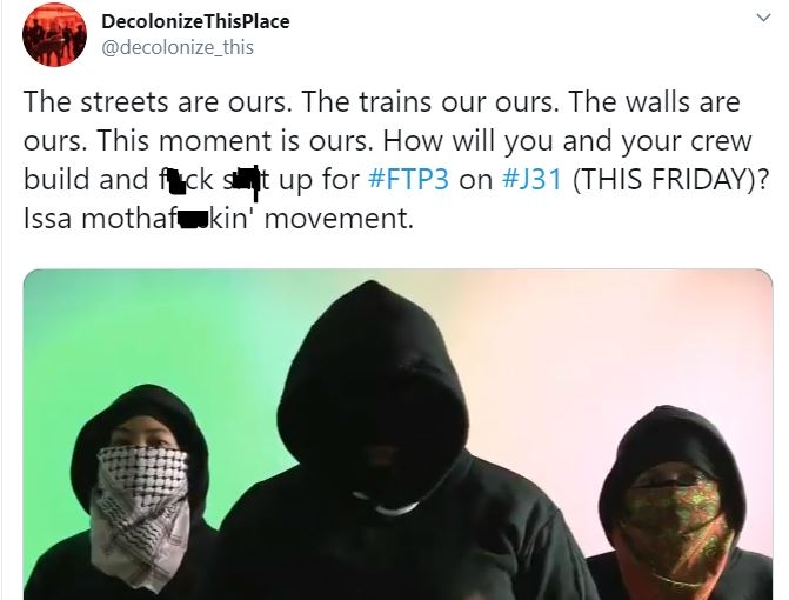 Two university academics face questions about their alleged involvement in the Jan. 31 protests in the New York City subway system.

Among the protesters' demands was to effectively ban police officers from patrolling the New York City subway system, a public transit system arguably at the top of terrorists' lists to strike as well as "free" subway rides. The group also demanded an end to "harassment" by police.

Decolonize This Place’s website describes the organization as “collectives that seek to resist, unsettle, and reclaim the city...we aim to cultivate a politics of autonomy, solidarity, mutual aid with a long-term, multi-generational horizon of decolonial, anti-capitalist, and feminist liberation…”

[RELATED: VIDEO: Sheriff Joe Arpaio event 'disrupted' by 'Antifa,' 'one of whom drew a knife']

On the group's website they had posted an event encouraging the gathering on January 31st, 2020 as a “city-wide convergence” at Grand Central Station with phrases such as "fuck the police" used multiple times.

One tweet from the group shows a video of three masked individuals encouraging followers to "fuck shit up."

The streets are ours. The trains our ours. The walls are ours. This moment is ours. How will you and your crew build and fuck shit up for #FTP3 on #J31 (THIS FRIDAY)? Issa mothafuckin' movement. pic.twitter.com/CoEjRSvmDX

[RELATED: Prof quoted as saying 'I don't have a problem with' Antifa violence]

"The streets are ours. The trains our ours. The walls are ours. This moment is ours. How will you and your crew build and fuck shit up for #FTP3 on #J31 (THIS FRIDAY)? Issa mothafuckin' movement," the tweet reads.

The video's subtitles state, "to all our friends, families, students, wage workers, teachers, musicians, transit workers, Fuck the Police 3 is coming J[anuary]31, right here in New York City. We encourage you to link up with your friends, your family, and think of the ways you can move in affinity to build and fuck shit up on J31 all day long."

The group's Twitter feed includes multiple video clips from the subway protests, including individuals jumping turnstiles and not paying to enter the subway, one individual dressed in a police uniform while wearing a pig mask, and multiple images of graffiti on subway station walls.

According to the New School's Vera List Center, Dhillon and Husain were both "deeply involved in Occupy Wall Street" in 2010.

A page on the University of Santa Cruz's website promoting an April event with Dhillon and Husain associates them with "Decolonize This Place." Neither Dhillon nor Husain responded to Campus Reform in time for publication.