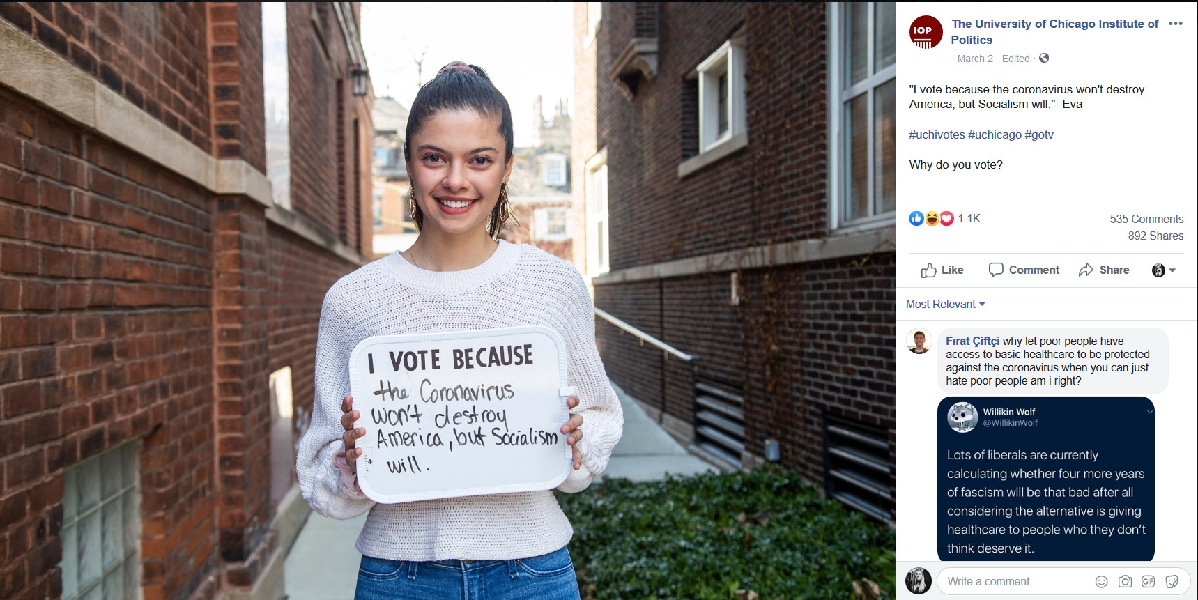 The daughter of former U.S. Rep. Sean Duffy found herself amid a swarm of online harassment for speaking out against socialism.

As part of a project for the University of Chicago’s Institute of Politics called “Why I Vote”, UChicago student Evita Duffy took a photo with a whiteboard that read “I vote because the coronavirus won’t destroy America, but socialism will.”

The photo was posted on Facebook by the institute, but Duffy says she was not prepared for the slew of online backlash she received.

Duffy spoke out in an op-ed, explaining “fellow students attacked my character, my intellect, my family, my appearance, and even threatened me with physical violence, using foul and offensive language.”

“I was called a racist and a xenophobe,” Duffy wrote. “Some compared me to animals. Others declared that they would personally stop me from voting, and many defended the personal attacks, saying I deserved to be bullied and that I don’t belong at the University of Chicago on account of my beliefs. I was told by many that I was the most hated person on campus. It was frightening. It was also hurtful, since some of the attacks came from people I considered friends.”

Duffy wrote that she had hoped she might encourage “a lively and robust debate on economics,” but that she was “naively unprepared” for what she called an “onslaught of online hate and threats of violence.”

In his capacity as a Distinguished Senior Fellow at the University of Chicago Institute of Politics, political analyst and former Obama White House official David Axelrod spoke out in defense of Duffy, calling out the “unacceptable harassment” she endured for sharing her political views.

Axelrod acknowledged that while Duffy’s mention of coronavirus could have been reasonably deemed insensitive by some, he “suspect[s] it was not the first clause about the virus that caused such a sharp response,” but rather the mention of socialism.

“Just as a thought experiment, let’s consider what the reaction would have been if this student’s whiteboard had read: 'I vote because coronavirus won’t destroy American but hate will!' Would that message have provoked the same outcry on campus? I strongly suspect the answer is no.”

[RELATED: Head of Harvard chemistry charged with lying about ties to university in Chinese coronavirus hub]

“We strongly condemn and deeply regret the threatening comments this student has received in reaction to the post,” Axelrod said.

“Standing up for free expression in fraught and polarized times is difficult and sometimes deeply uncomfortable,” added Axelrod. “Yet it is precisely in moments like this that it is most important that we hold fast to this principle. Because if this student’s freedom of expression is abridged today, everyone's is at risk.”