Campus Reform | UCLA caves to striking students, only to be met with more backlash

UCLA caves to striking students, only to be met with more backlash

That was not good enough, and the students continue to strike. 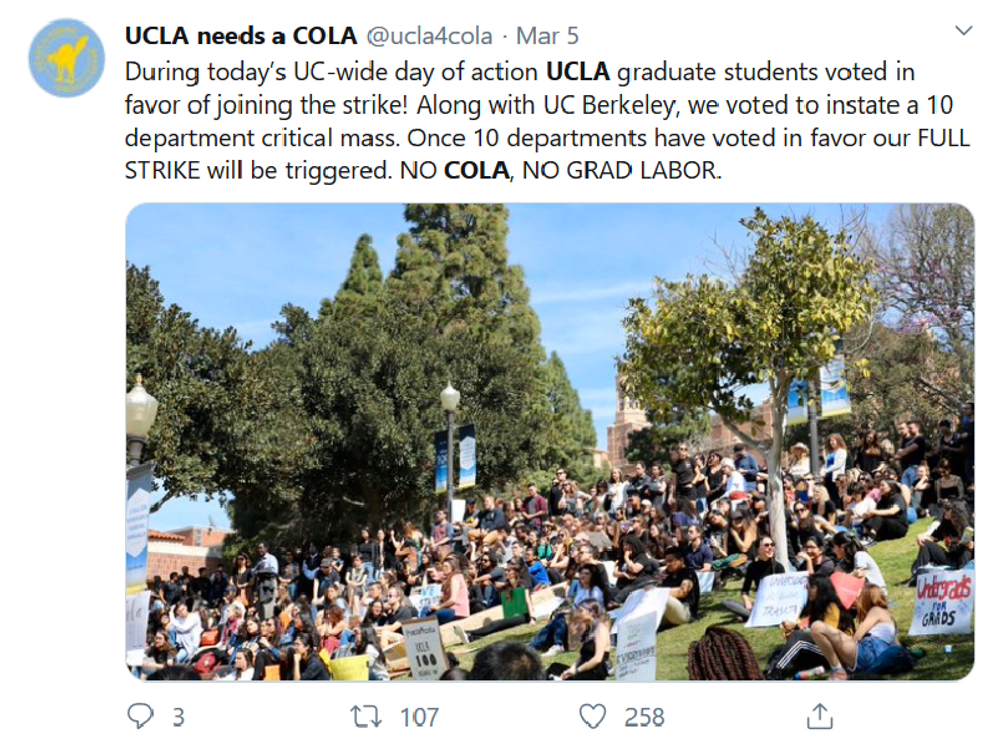 In a letter addressed to the University of California-Los Angeles community on Tuesday, Executive Vice Chancellor and Provost Emily Carter appeared to cave to graduate student demands, only to be met with even more scorn from even more students.

In an email regarding the ongoing strike by UC students at campuses around the state, Carter said UCLA would be “working to utilize some of the funds from our just completed Centennial Campaign, as well as other institutional funds, to provide summer graduate fellowships for up to three months at $2,500/month to support students engaging in scholarship, research, and creative work toward doctoral degrees.”

“Recognizing the challenge that the high cost of housing presents for our graduate students, UCLA has been working to create additional housing inventory and new, lower-cost housing options for graduate students,” said Carter, before noting that housing offered to grad students by the university are at rates “35 percent to 50 percent below current market rents in the region."

Carter says that these housing options are available for 3,545 graduate students, and that almost 500 of these students have monthly rent payments that are less than $1,000. “Hundreds more living spaces at that rate will become available in fall 2020 and fall 2022,” she added.

“Both the grad students and undergrad students have to deal with the rising cost of living just as anyone else in the United States deals with,” a UCLA student who wished to remain anonymous told Campus Reform. “If they are going to assist the grad students they should also keep in mind the undergraduate students who often do research for free.”

Curtis Rumrill, a doctoral graduate student at UC-Berkeley, called for an end to so-called wildcat strikes, saying, “[E]verything I know as an organizer says that it is strategically deeply flawed in ways that range from being naive, to irresponsible, to verging on unethical.”

“Watching this strike feels like watching a bunch of inspiring young activists load into a van and then drive off a cliff on the assurances by the driver that once in the air the van will magically fly,” Rumrill continued. “Maybe the driver believes this. Maybe the navigator doesn’t care, and is happy to see them all crash and burn to prove a point. Maybe everyone in the van believes that the van will fly. Maybe it is even the morally correct thing for the van to fly. The problem is that the physics of the fall won’t be subject to moral reasoning.”

The response to Carter’s statement was largely rejected, with one grad student group tweeting:

“Today, nervous UC admin offered grads a few need-based crumbs from donor money, instead of fixing their neoliberal shitshow of a university. Looks like they need to take a class with our renowned UCLA faculty asap.”

UCLA professor Robin Kelley encouraged the students in a Tuesday statement of solidarity.

“This is bigger than a cost of living adjustment. You are on the frontlines of a broader struggle against a new university order that entails the casualization of labor; rising tuitions; the financialization of higher education resulting in unsustainable student debt and corporate profit. Not to mention investments in institutions that violate human rights and hasten the planet’s demise,” said Kelley.

“You are fighting for a different future,” Kelley continued, “and as faculty who want a university that practices equity and ethical behavior, that can reverse its neoliberal trend, we have no choice but to stand in solidarity and to stand up.”

A Facebook page called “UCLA Secrets,” where students can share anonymous thoughts, offers a window into the undergraduate reaction to the strike.

“This affects all of us because classes are nothing without TAs, no matter how bad or good they are. Just because it’s at Santa Cruz doesn’t mean it can’t happen at UCLA,” wrote one poster. “TAs and grad students in general need our undergrad support, because they do work hard and we wouldn’t be able to graduate without them. The UC system shouldn’t be exploiting ANY student. We literally pay tuition to this place that rarely, if ever, has our best interests at heart.”

Two Ph.D. candidates at UC-Berkeley, Tara Phillips and Shannon Ikebe, also voiced their support for the strike, writing, “[W]e believe that our union, and our collective power as workers, will only be made stronger when workers demand that leadership be held accountable to workers’ rights and interests.”

“The COLA wildcat strikes have already successfully organized UC graduate workers to an unprecedented degree for the first time in many years: thousands fill the streets, normal operation of the university is shut down on several campuses, and the movement is growing as we speak. It is time for the union leadership to acknowledge this fact and let COLA organizers lead any negotiations with the UC management that may occur,” the pair added.