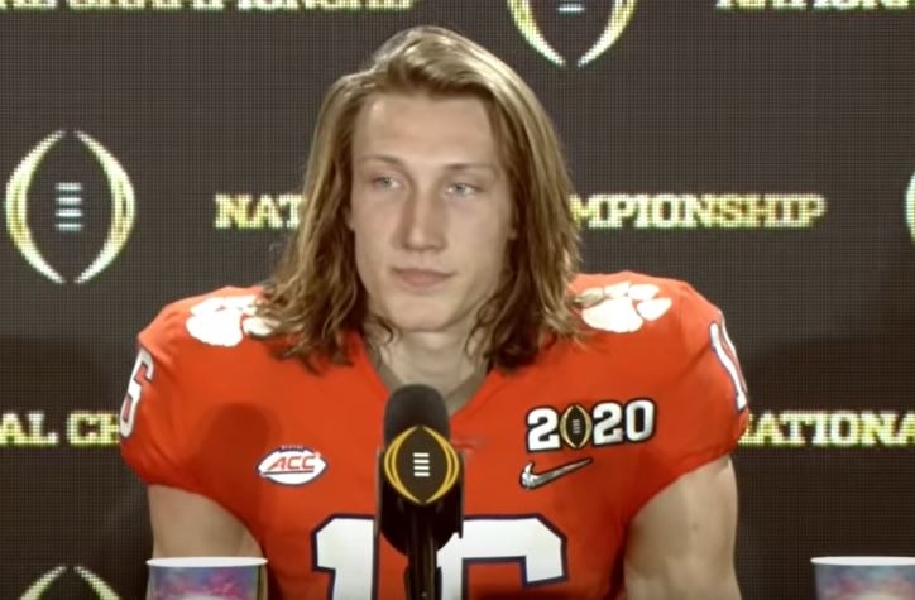 Clemson University quarterback Trevor Lawrence started a GoFundMe online fundraiser with his girlfriend Marissa Mowry to help victims of the coronavirus. But, within a day of launching the fundraiser and raising more than $2,500, school compliance officials forced Lawrence and Mowry to close down the fundraiser because of NCAA regulations that restrict a student athlete’s ability to use their image and likeness.

In a post on Instagram, Mowry, who is a soccer player at Anderson University, said that Lawrence could no longer participate, and that the GoFundMe page would have to be taken down. She added that they also could not send the money to individual families as initially intended, but that they could donate the money to nonprofit organizations.

“Unfortunately though, Trevor cannot be a part of [the fundraiser] anymore due to compliance"

“Unfortunately though, Trevor cannot be a part of [the fundraiser] anymore due to compliance,” Mowry said.

“We’re really sorry if you thought your money was going to go to a direct family because it no longer can,” she explained. “It can only be donated to the nonprofit organizations.”

Letter nominations: Email their name, place of work, and profession (email below) If you want to donate to specific organizations that will help fight the impact COVID-19 has had, use the link in my bio to donate to: No Kid Hungry or donate to Meals on Wheels. Thank y’all in advance for the impact you all will make! Email: TrevorMarissa1016@gmail.com

However, just a day after the fundraiser was shut down, the NCAA stepped in and announced it would ease these restrictions to allow student-athletes to support their communities during the coronavirus.

The organization also claimed it did not ask Lawrence to take down the GoFundMe page.

“The NCAA did not ask Trevor Lawrence to take down his fundraiser for COVID-19 patients and their families,” the statement read. “We continue to work with member schools so they have the flexibility to ensure that student-athletes and communities impacted by this illness are supported, and we applaud Trevor for his efforts.”

The NCAA did not ask Clemson student-athlete Trevor Lawrence to take down his fundraiser for COVID-19 patients and their families. https://t.co/5oaG75LNQC pic.twitter.com/fUaux6SXdi

Clemson University also issued a statement on the matter and thanked the NCAA for “waiving” its regulations.

“In light of current circumstances surrounding COVID-19, the NCAA reached out to Clemson Athletics this evening informing us that they are waiving restrictions that had been in place and are now allowing institutions to utilize discretion with respect to fundraising efforts,” the statement read. “We applaud and appreciate their swift action in permitting this activity to help people in a time of need.”

We are appreciative of the action taken by the NCAA this evening. pic.twitter.com/rq4zI8PpDR

[RELATED: Here's how colleges, students will benefit from the $2 trillion coronavirus relief package]

After the reversal, Lawrence thanked the NCAA.

“I just wanted to thank the NCAA, really,” Lawrence said. “Everyone’s made them out to be the bad guy, but it was more so the rules that were already in place. They’ve done a really good job of responding and actually allowing us to do it.”

Campus Reform reached out to Lawrence and Mowry but received no response in time for publication.