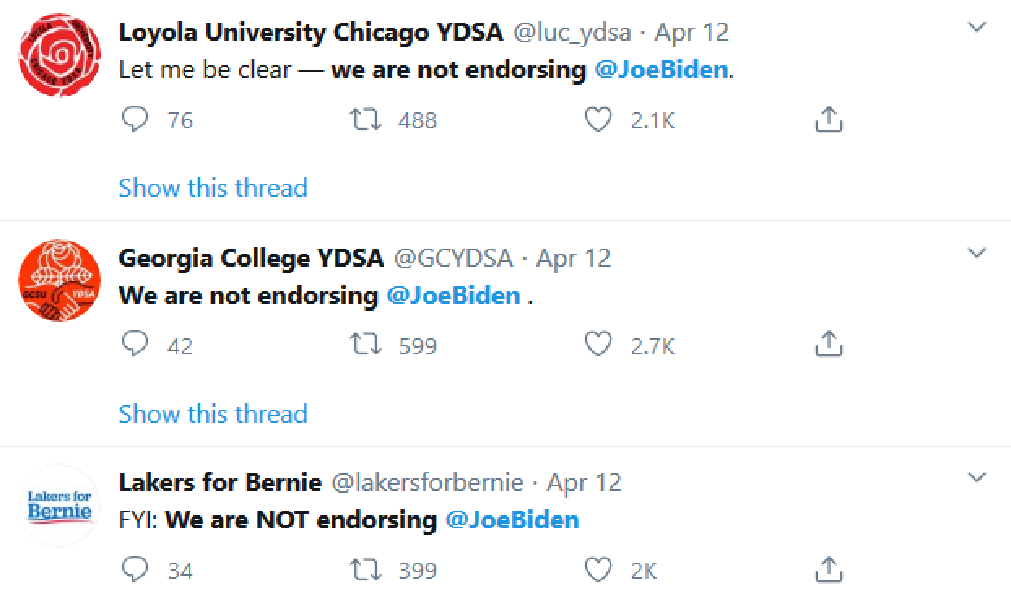 With Sen. Bernie Sanders' announcement to suspend his 2020 presidential bid, former Vice President Joe Biden is now the presumptive Democratic presidential nominee who will take on President Donald Trump in the fall. However, young Sanders supporters are publicly announcing that they will not endorse Biden for president, despite Sanders' and President Barack Obama's endorsements of Biden.

The U.S. Youth Climate Strike, a far-left climate activist organization, took to Twitter following Sanders’ campaign suspension announcement, stating, “We are not endorsing @JoeBiden.” The statement sparked a reaction among like-minded organizations, with the Democratic Socialists of America, Young Democratic Socialists of America, and Students for Bernie following suit.

Just two days later,  DSA duplicated the climate organization’s tweet. This prompted former head of the Democratic Coalition Jon Cooper to jab at the organization, calling them “irrelevant” [sic] and saying Biden is better off without their endorsement.

This public disapproval of Biden quickly spread to college campuses. YDSA, DSA, and Students for Bernie clubs on campuses around the nation took to Twitter and released the statement “We are not endorsing Joe Biden,” showing a sharp divide within the Democratic party.

Campus Reform interviewed Mikey Hayes and Michael Dunphy, two students at the University of Maryland and board members of “Terps for Bernie 2020,” to get insight into what leftist students' reasons are for disavowing Biden so vehemently.

Dunphy told Campus Reform that Sanders' support is large in part due to his stance on climate change and his desire to take "drastic" steps.

“Bernie Sanders was much more fundamental and was a lot more ambitious [with climate action].”

Hayes agreed with Dunphy and said Biden is too aligned with the Democratic party.

“A lot of college students feel betrayed by the DP’s decision to appease the right with a very centrist candidate, and especially one who feels it’s not necessary to even consider the youth vote.”

“People want to be seen, and Joe always says ‘I see you,’ but it’s disappointing for him to choose centrist and even right-leaning ideas over the ideas that are existent within his own party,” he added.

Hayes also says that even though they are not endorsing Biden, they may have no choice but to vote for him anyway, saying that Trump is the "most harmful" president in history.

Dunphy said the differences between Sanders and Biden are evident, expressing his preference for Sanders.

“Bernie’s been very very consistent. He’s been a leader in what he stands for and what he’s advocating for, where Biden has been more on the back end where every time something popular happens, then he supports it.”