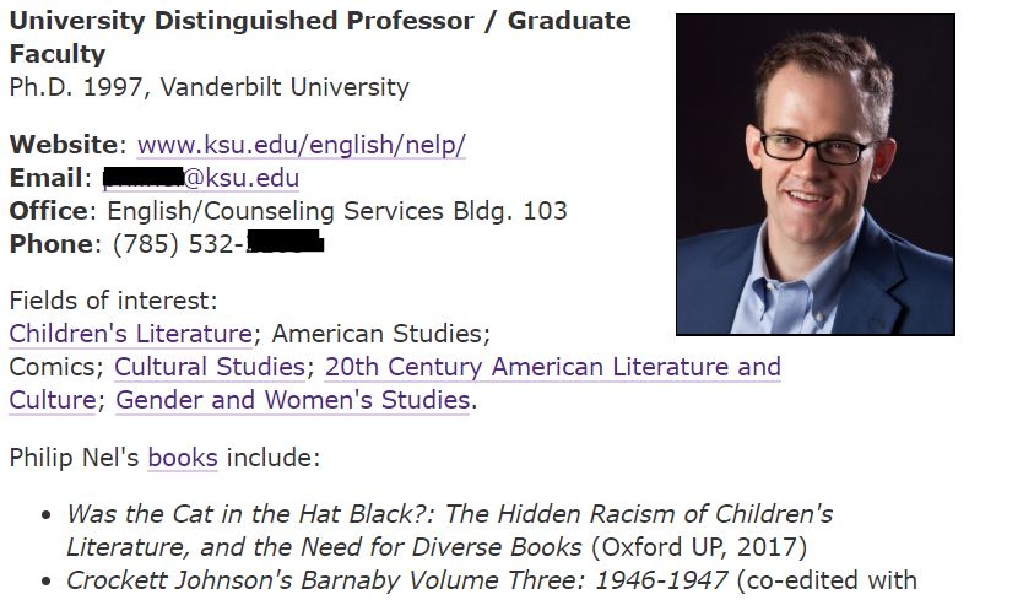 A professor at Kansas State University said that Republicans are part of a “death cult" and asked why no one has yet "developed an app to track Republicans," who he calls "plague spreaders."

In response to Kansas Democratic Gov. Laura Kelly criticizing Republican leaders for not banning churches and other faith organizations from meeting amid the pandemic, KSU English professor Philip Nel tweeted "Local branch of death cult, aka @KansasGOP, votes to exempt churches from quarantine rules, endangering the lives of us all. This leads me to a serious question."

1. 💀 ⛪️ Local branch of death cult, aka @KansasGOP, votes to exempt churches from quarantine rules, endangering the lives of us all. This leads me to a serious question. https://t.co/94a8RzutPU

Nel continued in another tweet to ponder whether there had been an app developed to track Republicans and “other plague spreaders."  In his final tweet, he demanded that the government release a “list of the virus spreaders and the virus-adjacent."

3. 📝🦠 For the sake of the public’s health, we need a list of the virus-spreaders & the virus-adjacent. Indeed, employers that provide vital services need to know whether their employees are putting other employees or customers at risk. #COVID19Kills.

Nel recently shared a tweet in which he called President Donald Trump “a deranged bloviator” and a “racist” whose “voice is toxic.”

Lorrie Moore: "I sometimes find President Trump’s voice reassuring. Not what he says. Not the actual words... But his voice has music."
Me: "I always find the deranged bloviator's voice enraging. What he says. The actual lies. The ignorance, bullying, racism. His voice is toxic."

The Vanderbilt-educated professor who specializes in children’s literature has been widely published, with works titled Dr. Seuss: An American Icon, and J. K. Rowling's Harry Potter Novels: A Reader's Guide. Some of his works have approached children's’ books through a social justice lens.  Notable among these is Was the Cat in the Hat Black?: The Hidden Racism of Children's Literature, and the Need for Diverse Books.

Dr. Nel hasn’t just written books but has also occasionally contributed to various periodicals, taking the same social justice and anti-Trump tone that his tweets take.  In an article he wrote in October, Nel asserted that books for children painting Trump in a negative light were honest and good.  Citing several anti-Trump storybooks, he said that “these books depicted the basic truths of the man: selfish, vain, heartless, dishonest.” In the same article, he criticized youth biographies of Trump that present a balanced assessment of his life and achievements, saying that they “succumb to the fallacy that presenting both positive and negative information creates balance.”

Kansas State’s Public Information Officer Michelle Geering told Campus Reform that Nel’s "Death Cult" statement was acceptable as it was published on a  “personal social media account and is an example of freedom of expression supported by the First Amendment.”

However, Geering stressed that Nel’s inflammatory comment “is not a statement on behalf of the university.”

KSU College Republicans President Joshua Willis told Campus Reform that though he respects the professor’s First Amendment Rights, Nel “should be held to a higher standard and be held accountable for hateful comments that go against K-State's Principles of Community.”

Frequently, he said, conservative students avoid speaking up in class and back down from defending their values because they fear reprisals from hostile faculty and administrators.  Willis asserted that this should not be the case “Conservatives should not have to fear expressing their beliefs in the classroom.”

Nel did not respond to Campus Reform’s request for comment in time for publication.