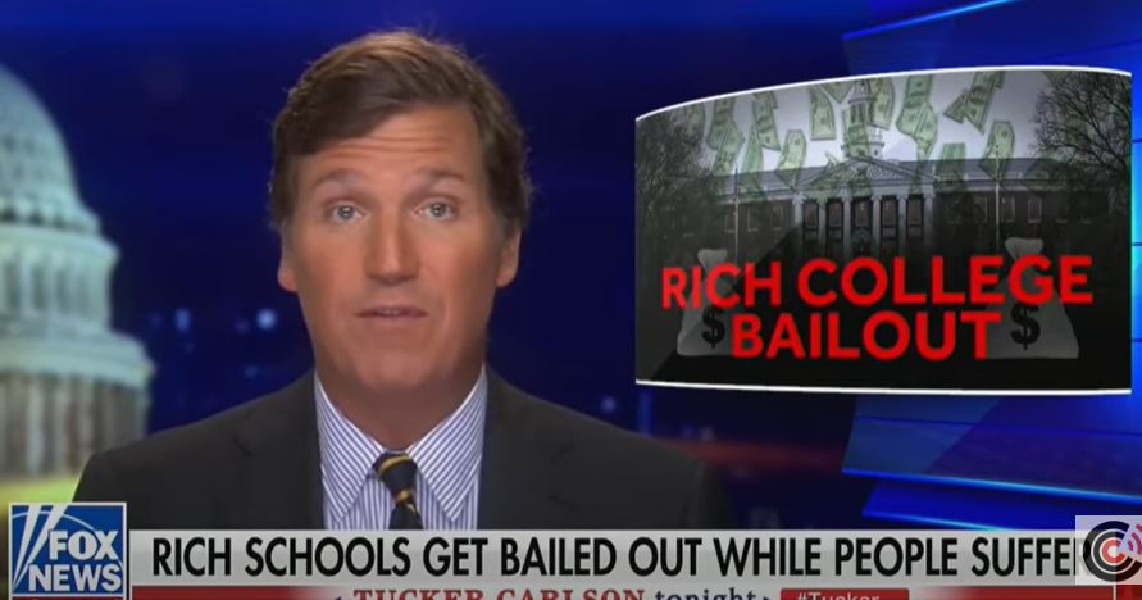 As part of the Coronavirus Aid, Relief, and Economic Security (CARES) Act, colleges and universities across the university received more than $14 billion, half of which they were required to distribute directly to students suffering financially from the global pandemic. However, as Carlson pointed out, the taxpayer-funded bailout didn't come with stipulations on university presidents' salaries, which are often in the millions.

"it shouldn't take shame for Harvard to do the right thing"

While some schools, such as Harvard, Stanford, Princeton, and Yale, have said they will not take the money, most schools, even those with billions in their endowments, will. Those decisions, however, came only after significant public backlash resulting from media coverage.

"But it shouldn't take shame for Harvard to do the right thing," Carlson said. "They should be decent enough to do it. That's a pipedream. They're not even close to decent. But in the absence of their decency, we need better laws. Not a single cent ever should be spent making rich universities even richer. They do enough harm to this country."

[RELATED: Colleges with more wealth than dozens of countries get another $360+ million from taxpayers]

However, that's not at all the reality. As Carlson pointed out, Columbia University, which is receiving $12.8 million from the CARES Act, has a $10.9 billion endowment and pays its president more than $2 million per year. The Chronicle of Higher Education pegged his total compensation at $3.9 million. In addition, Columbia University's undergraduate general studies tuition rate for 2019-2020 is just shy of $65,000.

Another Ivy League institution, the University of Pennsylvania, has announced additional "summer savings grants" to help students who have lost their summer jobs, but is set to take the $9.9 million it was allocated as part of the CARES Act. UPenn's president has a total compensation package of $3.2 million per year. UPenn's endowment is $14.7 billion. UPenn announced in February its tuition rate would increase by 3.9 percent for the 2020-2021 academic year.

Carlson named other colleges whose presidents make millions per year while taking millions from taxpayers, including the University of Michigan and Ohio State University. UMich, which is receiving $36.8 million from the CARES Act for its three campuses in Ann Arbor, Flint, and Dearborn, has an endowment worth $12.4 billion and pays its president more than $840,000 per year, according to the Chronicle of Higher Education. Ohio State University will receive $42.8 million from the CARES Act, despite paying its president $1.2 million per year and having an endowment worth $3.6 billion.

"Young people in this country are the poorest group in this country," Carlson pointed out, "but the schools that pretend to educate them are the richest institutions we have. They're getting a bailout that young people could only dream of."

"Why? Because universities are one of the most powerful political interest groups in the nation. And young people are not. And you're not. And that's why the government is blowing billions giving them cash they don't need at the same time you're wondering how to pay your mortgage."