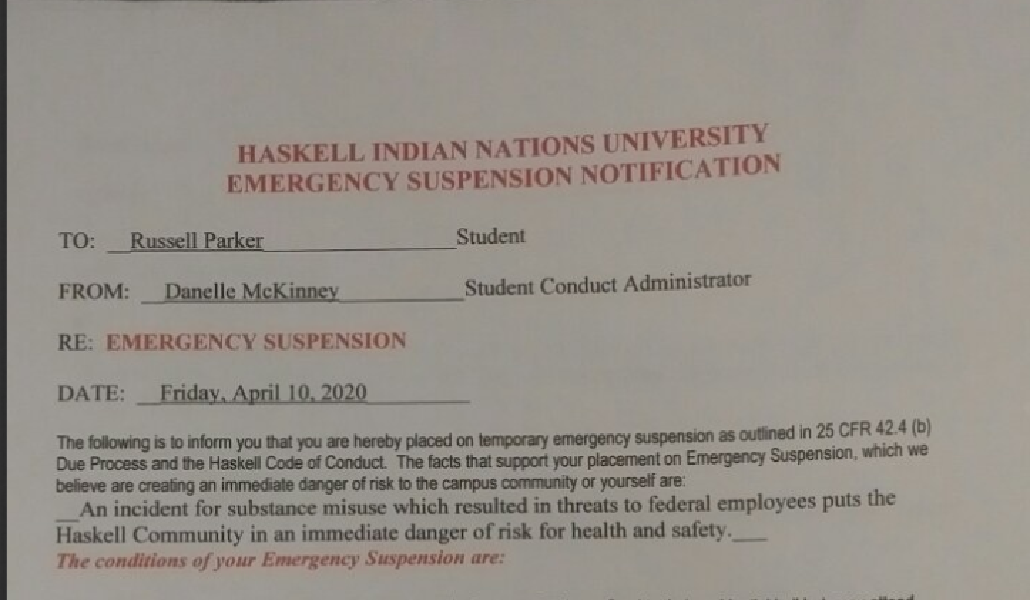 After a parking space conflict with a university employee, a student was evicted from campus without a hearing. This left him homeless.

Russell Parker is a student-athlete at Haskell Indian Nations University (HINU), a federally operated tribal university which  “serves the educational needs of American Indian and Alaska Native people from across the United States.” The campus is closed due to COVID-19 but Parker was able to remain in university housing due to extenuating circumstances.

“Up to this point, I have felt completely supported by everyone at this university and now I am homeless."

According to Parker’s account of the incident, on April 8, Parker was hitting golf balls on campus when the acting facilities foreman, Stephen LaCour, approached him. LaCour repeatedly told Parker that the campus is closed to the public, but Parker assured him that he was a student and that he was currently living in the campus’ Winona residence hall.

Parker says that LaCour asked for his student ID and parking sticker for proof of enrollment which brought his attention to Parker’s car parked in a “no-parking zone.” According to Parker, he pointed out to LaCour that no one has ever told him to move his car from the area before, but LaCour was adamant that it be moved. When LaCour turned to drive away, Parker says he  responded, “Are you on some kind of power trip?’

[RELATED:  A Michigan student was arrested and charged for posting this photo]

Following this exchange, a security guard arrived on the scene at the request of LaCour. According to the incident report filed by LaCour, the employee made this decision because he noticed that Parker had a golf club in his hand and was becoming “very agitated.”

On April 10, Parker was issued an HINU Action Notice from University Student Rights Specialist Danielle McKinney on the basis of “violence indicating threats to one or more federal employees.” The consequence issued was a “temporary emergency suspension level 2 with a recommendation for PERMANENT LOSS OF HOUSING”.

A level two suspension requires the student to move out of his on-campus housing. However, the student can attend classes, eat lunch on campus, visit the library, and be on campus for school-related functions. Failure to comply may result in prosecution for “criminal trespassing.”

According to the Notice, the “Emergency Level 2 is not currently appealable,” but the “permanent Loss of Housing is.” Parker’s deadline to set up a hearing was noon on April 17, 2020.

Parker responded immediately to the Notice with an email to Tonia Salvini, Vice President of University Services, pleading for “consideration” and detailing his side of the tense encounter. He said that this action was taken by the university “will leave [him] homeless at the height of a pandemic.”

Parker stated that the charges brought against him are “extreme and simply not true.” “At no point did I approach Mr. LaCour or say anything that would imply a threat of violence,” continued Parker.

He attributes his initial “apprehension” with feeling “targeted due to [his] appearance as a large person and non-traditional student who is not immediately recognizable as Native.”

“Up to this point, I have felt completely supported by everyone at this university and now I am homeless,” Parker wrote in his email to Salvini. “I implore you to please consider the dire position that I am in.”

The security guard recounts in his report that Parker complied with his orders, but said little and acted “irritated.”

According to the Foundation for Individual Rights in Education (FIRE), HINU “missed its own appeal deadline” of April 17 and never responded to Parker’s plea.

Hunter Boorigie, a former student at HINU, told Campus Reform, “I’m just disappointed in Haskell for treating one of their own that way. They always preach that we are united. But they will treat a student this way? The campus is closed, so I feel that a simple ‘move your car’ would have sufficed. Not that it even matters with the school shut down.”

Because Haskell is a federally operated institution, it is required to uphold a student’s right to due process. Haskell’s student code of conduct states that all students are “entitled to due process in every instance of disciplinary action for alleged violation of Haskell regulations.”

FIRE sent a letter to the university on behalf of Russell Parker on April 24 “urging administrators to immediately schedule a hearing for Parker” by April 28. Several minutes after it was sent, a university faculty member accidentally included the FIRE representative in an email to the administration advising them to avoid responding because the issue would “likely go public” and to wait to receive “guidance” from Clint Bowers at the Bureau of Indian Education.

Campus Reform discovered that Stephen LaCour, who studied "community organizing" at George Washington University, appears to be the brother-in-law of Laura LaCour, who is listed as a guidance counselor in the Student Rights Office. Commenting on the Haskell Indian Leader Facebook post about the first case of coronavirus on campus, Laura criticized the University’s choice to allow some students to remain on campus on April 4. She wrote, “Winona hall they share the showers etc. The essential staff have families too, my bro in law still [sic] working. I feel for both stage [sic] students and essential staff but now they may have all exposed [sic].” 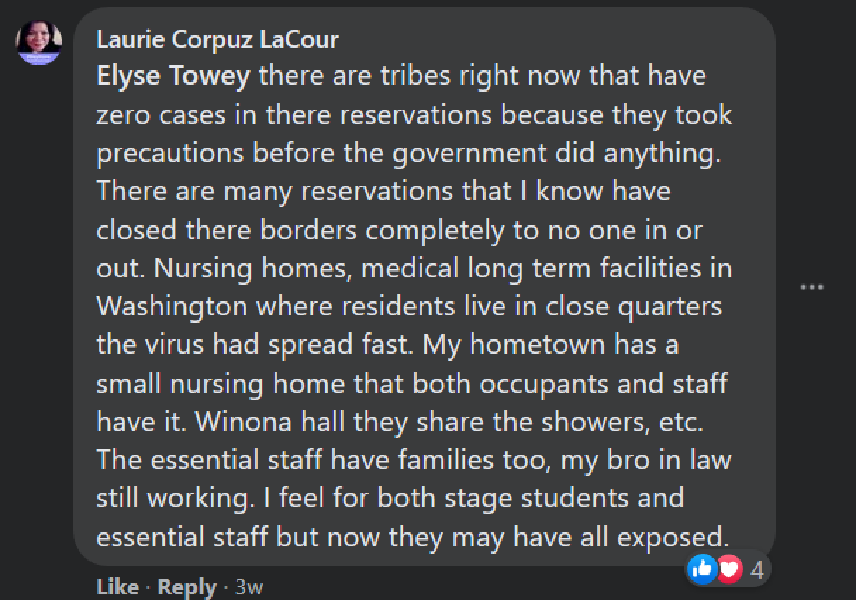 Due to the suspension, Russell Parker was left homeless and forced to live in his car until he could travel to Georgia for temporary housing, according to FIRE.

Referring to the struggle of finding temporary housing amid COVID-19, Parker told the University’s student newspaper, “it’s like walking around with a bomb strapped to my chest.”

Boorigie told Campus Reform that the university administrators “know that the majority of students [who attend HINU] are miles and miles away from home and any family.”

“I have faced discrimination in my life, but I never thought it would happen at a place like Haskell,” said Parker to FIRE. “I would very much like to tell the university my side of the story, but I cannot do so until Haskell gives me that opportunity — an opportunity I’ve repeatedly requested yet the university has refused to provide after they evicted me.”