UF students receive email encouraging them NOT to pay rent 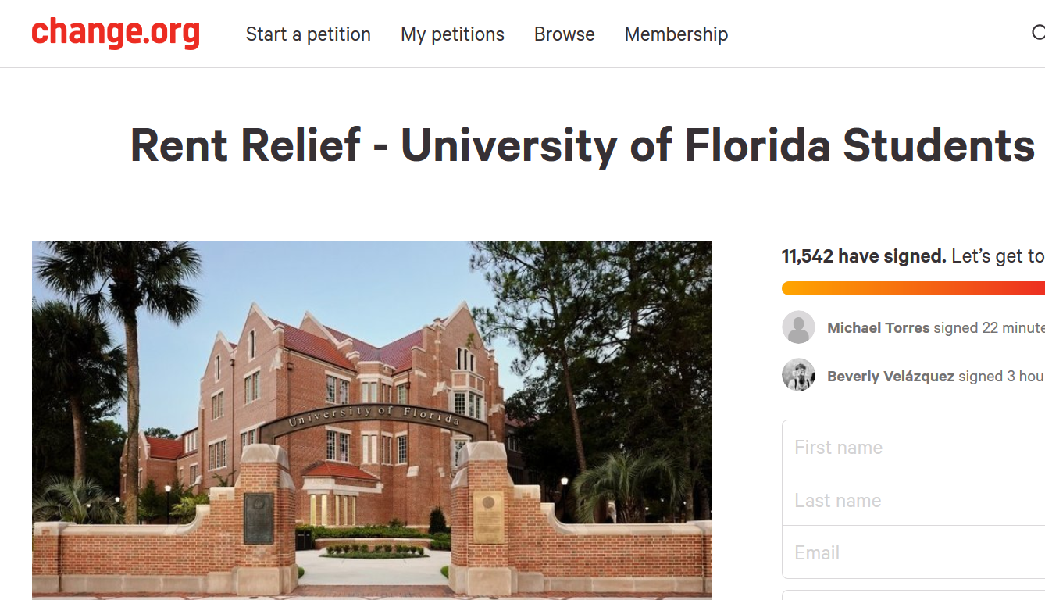 “This is something that’s been talked a lot between my friends and I...seeing someone take the initiative to contact students is very thoughtful,” Someillan told Campus Reform.

“When I signed my contract with my apartment in Gainesville, I knew that if something were to happen, I would have to continue paying my rent...so I was prepared in that sense."

Someillan was pleasantly surprised when University of Florida Student Government Senator Zachariah Chou sent out an email Monday morning discussing the topic of rent relief for UF students. The email encouraged students to send emails to Gov. Ron DeSantis and proposed a rent strike in the local community of Gainesville, Florida. Additionally, the email emphasized how many college students are being forced to pay their rent on off-campus housing during the coronavirus pandemic, which has caused many students to return home for the semester.

On March 11, the University of Florida sent out an email encouraging students to “return home until March 30” as all classes moved online. Many students living in off-campus housing were faced with the decision of staying in Gainesville or going back home to live with their parents.

Some students who chose to return home due to COVID-19 were frustrated, however, when their landlords refused to offer any rent relief or changes to leasing contracts. One student, Sarah Lobo, took the initiative to create her own petition and share her story. The petition has amassed more than 11,500 signatures so far.

One of those signatures belongs to Joseline Donoso, a University of Florida student who left Gainesville.

“I received the petition and I am going to sign it because during this hard time, we need help. We don’t work and we don’t have the money to pay for an apartment we are not going to be using for at least 3 months,” Donoso told Campus Reform.

Donoso was just one of the nearly 53,000 students at UF who received the link to this specific petition in the email. However, some students are still finding it hard to support this initiative.

[RELATED: UF students: It's 'morally wrong' for landlords to charge full rent in these 'trying times']

Marcello Cuadra, a junior at UF, says that although he understands why this petition was created and why people want it passed, he has accepted the responsibility of signing the leasing contract.

“When I signed my contract with my apartment in Gainesville, I knew that if something were to happen, I would have to continue paying my rent...so I was prepared in that sense. I’m not sure if I will participate [in signing the petition]. Yeah, it sucks that I'm wasting money but I signed that contract. Bills still have to be paid. All of my stuff is over there, so although I'm not there, in a way I'm paying for storage” Cuadra told Campus Reform.

Zachariah Chou, the author of the email, told Campus Reform that he has seen a good split between both sides of the story.

“I have heard tales of people not getting their emails back from their complex management, I have heard one instance in which an individual's rent is going up by $200, and of course I have gotten emails from students who think this is a terrible idea, landlords, etc,” said Chou.

[RELATED: Students convince UMich to assist with the cost of traveling home]

He added that “these are uniquely trying times and if even the Trump Organization is even trying to seek rent relief, I would hope that there is empathy for the common man to do so as well.”

According to Chou, he was acting independently from Student Government when he sent the email encouraging students to take action. However, he did mention that the current UF Student Government Administration discussed the topic of rent relief in their recent update posted on social media.

Today marks the first day of the new administration’s term! Here are some of the initiatives our team is working towards to help combat the difficulties students are facing in light of the virus. pic.twitter.com/C4Futpxayo

Additionally, the email was sent in collaboration with the Alachua County Labor Coalition and Gainesville Housing Justice. The Gainesville Housing Justice was recently formed on April 10. According to a statement released on its Facebook page, its mission is to “make housing a human right in the city of Gainesville” by securing “legal representation” and “working to educate all of our members on their legal rights as renters."

At the end of the email, students were given the opportunity to fill out a Google Form if they wanted to get more involved in organizing neighborhood rent strikes in Gainesville. However, Chou did mention in his email to students that “there may be legal risks if getting involved” with this movement.

When Campus Reform asked for clarification on this statement, Chou explained how he believes that “the legal risks depend on the individual contract and how negotiations may turn out with each complex...it all depends on people's ability to pay and management's ability to work with them. I don't think there is much pity for people who raise rents on others during a pandemic though.”

Campus Reform reached out to the Alachua County Labor Coalition and Gainesville Housing Justice but did not receive responses in time for publication.