Both the national College Democrats and College Republicans have come together to issue a list of demands to American universities to put a stop on the Chinese Communist Party's campaign to influence academia.

“We are compelled to voice our concerns over the present state of academic freedom, and bring to light the continued exploitation of liberal, democratic academic institutions by authoritarians." 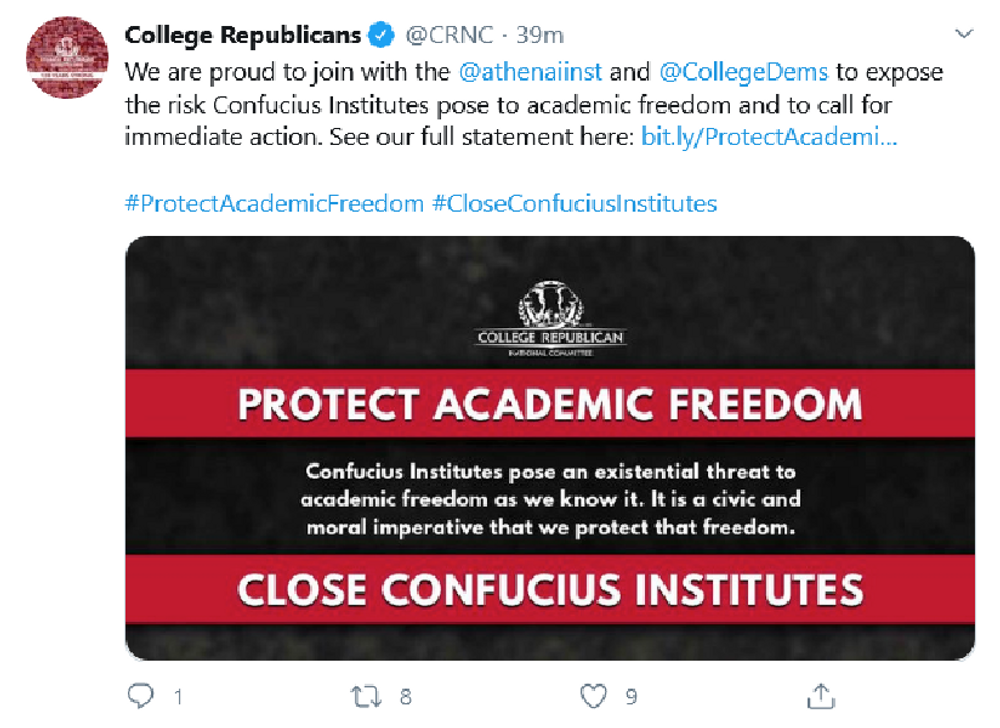 In a rare cross-party coalition, the National College Republicans and College Democrats came together Monday to demand that American universities take a stand against the Chinese Communist Party’s “long-term campaign” against academic freedom in the U.S. by closing all Confucius Institutes.

In a statement released Wednesday titled "CONCERNING THE THREAT OF AUTHORITARIAN INFLUENCE AND THE DEFENSE OF PUBLIC INSTITUTIONS," the two national student political organizations united against the presence of the known propaganda centers on campus, calling for American universities to put an end to “the Chinese government’s flagrant attempts to coerce and control discourse at universities in the United States.”

[RELATED:  Here are the Chinese 'propaganda' centers currently operating in the US]

“We are compelled to voice our concerns over the present state of academic freedom, and bring to light the continued exploitation of liberal, democratic academic institutions by authoritarians,” reads the statement.

We are proud to join with the @athenaiinst and @CollegeDems to expose the risk Confucius Institutes pose to academic freedom and to call for immediate action. See our full statement here: https://t.co/yQpfROfpAL#ProtectAcademicFreedom #CloseConfuciusInstitutes pic.twitter.com/QH0m8WzVKg

“We further recommend that colleges, universities, non-governmental organizations, and representatives of vulnerable groups implement practices and policies to protect academic freedom from authoritarian interference in any form," the statement continues.

The organizations outline various aspects of the “long-term campaign undeniably aimed at expanding the reach and power of the Chinese state’s apparatus of oppression,” beginning with specifically calling out Confucius Institutes.

They also agree that the CCP “has undermined the integrity of higher-learning institutions by seeking to bribe and intimidate academics.”

“The Chinese Communist Party’s actions pose an immense threat to academic freedom and to human dignity,” the statement continues, adding that “It is imperative that we distinguish this totalitarian regime from the Chinese people, whom we must steadfastly defend from abhorrent acts of xenophobia, racism, and hatred. We must act to give voice to the long-oppressed, be they Chinese, Hong Konger, Mongolian, Taiwanese, Tibetan or Uyghur.”

The groups also note that although “concerns over these matters have been raised through legitimate means for over two decades,” the CCP “and its proxies” have only responded via propaganda and by “ambiguously using the threat of financial pressure against universities."

In light of this, the coalition issued a list of demands, beginning with “the immediate and permanent closure of all Confucius Institutes in the United States.”

The groups are also demanding “the revocation of any organizational and/or club status afforded to the Chinese Students and Scholars Association” and a ban of “all funding from all proxies and agencies of the Chinese state or the Chinese Communist Party without explicit university approval.”

The coalition also demands complete public disclosure of any and all ties, “both financial and academic” between American colleges and any Chinese “state agencies and proxies,” and that schools create systems by which students can report violations of these rules and other “general encroachments upon academic freedom.”

“Let this action be the start of a broader, independent effort by academic institutions to counter wherever it arises,” the statement concludes. “In the fight against authoritarianism, universities can continue to benefit from the largesse of an emboldened authoritarian state, or they can stand on the right side of history. They cannot do both. The world is watching, and the fate of liberal democracy--based on the fundamental dignity of the human person--depends on our success.”