Students to be welcomed back to campus by virus testing ROBOTS, teachers behind glass 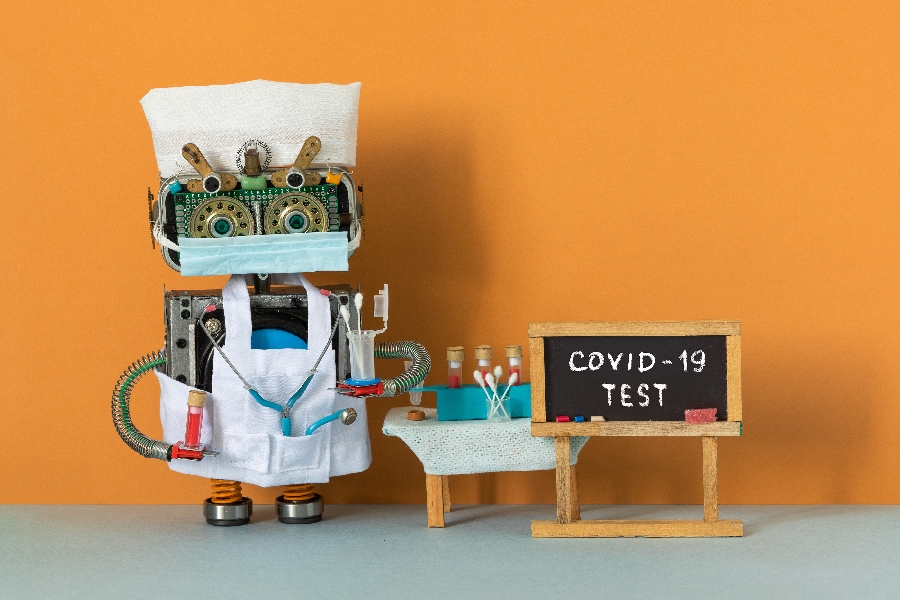 A number of unique solutions have cropped up as colleges create measures by which to safely re-open their campuses while preventing further spread of the coronavirus.

Preliminary steps for many schools include the establishment of teams tasked with evaluating how best to bring students back to campus, such as Amherst College, which announced the creation of “a student task force that will help us consider our options and come up with creative solutions to whatever challenges we face.”

Enter robots, which “do sample preparation and test setup really, really well. And they do it with higher accuracy—and don’t get tired!”

Schools are still in the process of assembling plans for the fall semester, as colleges face a variety of challenges which include accommodating classes and academic affairs, adjusting residential and student life activities, and addressing the possibility of the virus manifesting itself on campus.

[RELATED: These colleges have every intention of returning to campus this fall]

Course scheduling is an area of high concern for college administrators.

The University of Texas is planning to begin the fall semester as scheduled and run classes until Thanksgiving break, after which students will not return to campus but instead “participate in reading days and final exams remotely.” This is in an effort to “avoid the possibility of students becoming infected during the Thanksgiving break and then spreading the virus to classmates upon their return after Thanksgiving.”

Similarly, Syracuse University will end in-person classes following Thanksgiving. The college has announced that in order to accelerate their schedule while maintaining academic requirements, “some additional Friday classes and some classes being held on weekends” may be necessary.

Michigan State University has not yet made a final decision, awaiting decisions from its own task force, but  University President  Samuel L. Stanley Jr. suggests, "Large classes could be replaced by hybrid courses with smaller classroom groups staggered through the week, augmented by online lectures.”

[RELATED: Notre Dame brings students back to campus, but there’s a catch]

“At MSU there are a lot of general education classes which have class sizes of hundreds, and are often participatory classes where attendance drops throughout the year, with the exception of in-class exams,”  MSU student Sergei Kelley told Campus Reform. “Classes like that where the material is easy and where a large part of the grade is dependent on you just existing in the seat or hitting any response for iClicker questions should just be online.”

Courses that take place in person will look different post-pandemic.

Purdue University president Mitch Daniels has described some of the ways in which Purdue’s classrooms may change, including spacing students 10 feet apart and having faculty teach from behind a Plexiglass screen.

Boston University is considering separating students into groups that will interact within themselves but not with any others. Pennsylvania State University is weighing options for the use of campus facilities that include implementing reservations or a take-out system in dining halls. Additionally, students who use the school libraries should expect interruption for deep cleaning of study areas and resources.

[RELATED: Universities to mass test students as they return to campus]

The University of California-San Diego has used the spring semester to explore the possibility of a program in which students self-test in hopes that “this initial phase will provide us with the knowledge and insight to eventually scale up to where we could potentially test monthly the vast majority of the roughly 65,000 students, faculty and staff members on campus,” according to UCSD Chancellor Pradeep Khosla.

As for fall planning, Boston University intends to utilize “specialized robots” to facilitate on-campus testing of students, instructors, and staff, and “students with roommates in high-density dorms might be tested more regularly.”

Instead of offering antibody and antigen testing that the public has become familiar with, the university will opt for the RT-PCR test, which is “a test that detects the genetic material of the virus,” according to BU professor of biomedical engineering Catherine Klapperich. “The test can take small amounts of that viral genome and amplify it until a lot of it is present in the test well. The test well will light up if it’s there,” explains Klapperich.

Enter robots, which “do sample preparation and test setup really, really well. And they do it with higher accuracy—and don’t get tired!”

Conducted via self-sampling, this approach is projected to serve the university well in mass surveillance testing efforts, although some in-person testing will most likely continue to be necessary.

President of Boston University Robert A. Brown emphasized that the value of a residential education will be “incredibly highly valued on the other side of this” in a recent virtual presentation to the Greater Boston Chamber of Commerce.

“We are going to have to be more flexible than we have ever been in the way we offer education.”