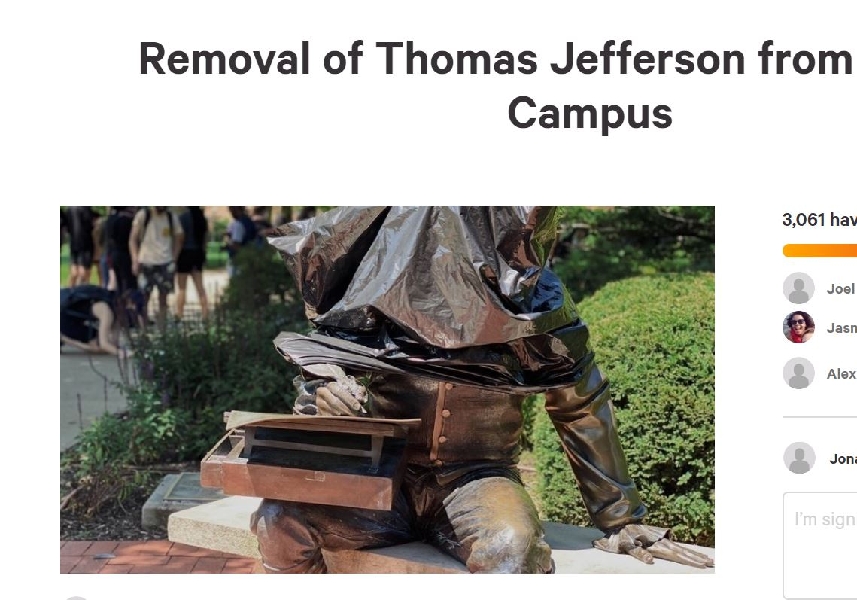 At the University of Missouri, students are demanding that a statue of Thomas Jefferson be removed from the quad.

As students respond to George Floyd’s death, monuments have been under attack, particularly those related to confederate history or those depicting slave owners.  Mizzou sophomore Roman Leaphart told KOMU 8 that he started an online petition calling on Mizzou to remove the statue because Jefferson’s ties to slavery bothered him. So far, more than 3,000 students have signed Leaphart’s petition.

“Mizzou has no room for a racist slave owner on our campus, in the Quad, where thousands of black students pass by everyday, forced to deal with imagery of the past in the future where we should be promoting equality, diversity and inclusion,” the petition reads. “A memorial of a racist has no place on [our] campus.”

“The vast majority of these confederate monuments were built during the era of Jim Crow laws (1877–1964),” the petition goes on to say. “Detractors like us know that they were not built as memorials but as a means of intimidating African Americans and reaffirming white supremacy.”

The University of Missouri has already faced controversy over the Jefferson statue. In 2015, students petitioned for its removal, asserting that it perpetuated “a sexist-racist atmosphere that continues to reside on campus.” The Missourian reported that when the petition failed to draw sufficient attention, students resorted to covering the statue in sticky notes showing messages like “racist,” “rapist,” “slave owner,” and “misogynist.”

Thomas Jefferson is not the only founding father under attack.

Photos taken at George Washington University in Washington, D.C.allegedly showed that a bust of the nation's first president had been toppled from its pedestal on campus. A Twitter user posted photos purporting to show the fallen statue, saying, “y’all are doing amazing” and “don’t be shy, graffiti the Marvin Center signs next.”

They knocked one of the statues of George Washington’s head off at GW 😂 y’all are doing amazing sweetie. Don’t be shy, graffiti the Marvin Center signs next 😍 pic.twitter.com/e1qMzCy5Er

“Bust a move, GWU,” a user commented on a second thread of photos.

GWU has not responded to repeated requests for comment from Campus Reform.