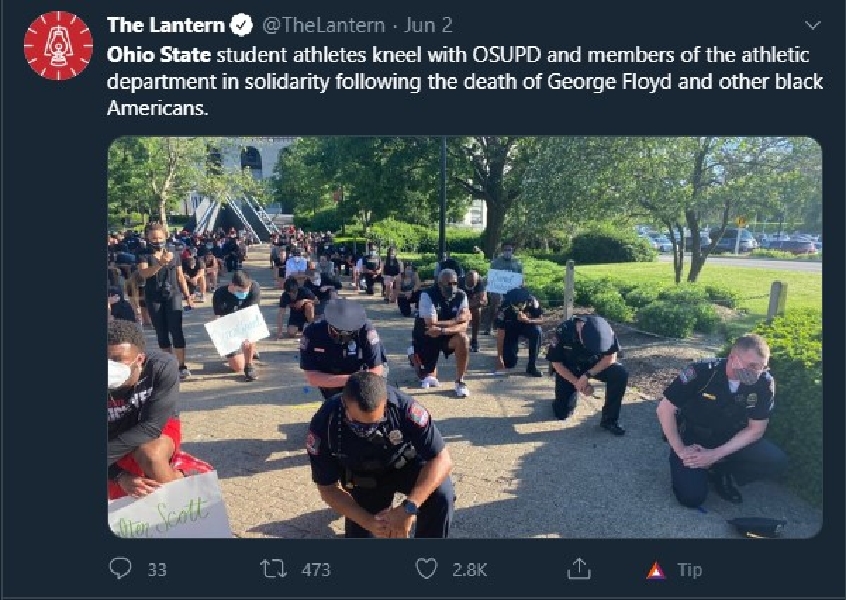 The Ohio State University’s undergraduate student government sent a letter to administration demanding that OSU dismantle all connections with the Columbus Police Department and redirect any affiliated funds to diversity efforts. Thousands of students have signed the letter in agreement.

The letter, sent June 1, addresses the “injustices against the Black Community and Columbus Protestors by the Columbus Police Department.”

“acknowledge and condemn the anti-Black violence the Columbus Police Department committed against Ohio State students and the greater Columbus community.”

“Our city is burning, our students are hurting, the safety and wellbeing of the Black community is at inherent risk and there is no other time to act than now,” writes the student government.

The governing body then proceeds to list its demands pertaining to OSU’s plans to address “community safety in Columbus.”

The students also demand that the university “reallocate the funds” that were originally going to OSU’s police department’s budget and instead redirect those funds to “student support units, such as the Office of Diversity and Inclusion, the Student Life Multicultural Center, Student Life Counseling and Consultation Services, or the Student Life Student Wellness Center.”

The letter also demands that the OSUPD “acknowledge and condemn the anti-Black violence the Columbus Police Department committed against Ohio State students and the greater Columbus community.”

[RELATED: Students call for laxed grading for black students. University goes along with it.]

Although the letter was addressed to now-retired University President Michael V. Drake, OSU appointed Kristina M. Johnson as its newest president on June 3.  The letter requests that a private and public statement be made on behalf of the university within 48 hours of its delivery.

Neither former President Drake nor current President Johnson has issued a public statement regarding the letter's demands.

“Those demands would not make our campus safer,” Chairman of the Ohio College Republican Foundation and president of the Ohio State College Republicans David Kalk told Campus Reform.“We all want justice for George Floyd and his family and we hope that the police can use this experience to realize there is more work to be done but the proposals in the letter are extensive measures,” Kalk added.

“We’ve seen over ten schools that have had similar policies opposed along with other radical proposals,” said Kalk. “We at OSU College Republicans do not support these measures because there is no scenario in which having no CPD presence on our campus will make us more protected.”