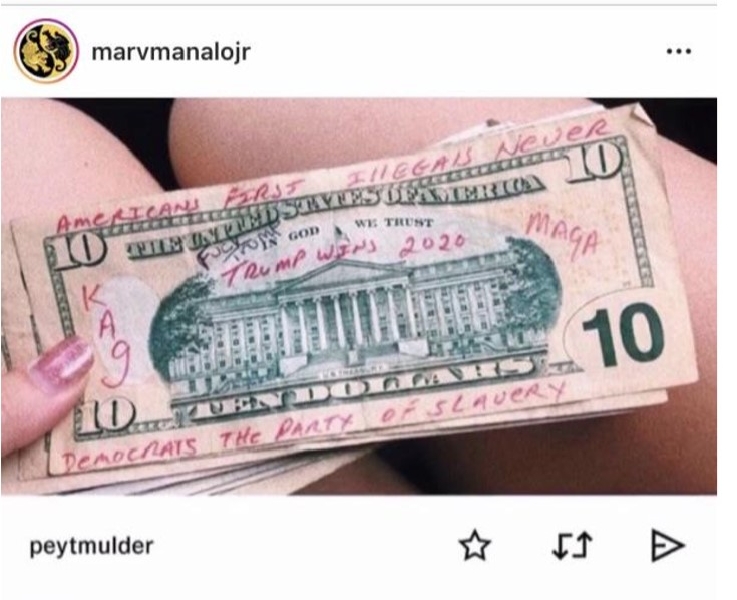 A Philadelphia student was publicly lambasted on social media by a recently graduated member of the student government for posting a picture of a pro-Trump $10 bill online.

Peyton Mulder, a junior at Temple University, posted a picture of a ten-dollar bill with pro-Trump messages written on it on her VSCO account, a social media app for photos. Marvin Manalo, the Deputy Director of Communications for Temple University’s student government for the 2019-2020 school year, blasted her on Instagram and Twitter because of it.

“Can we please give this girl the attention she ordered? Covert racism doesn’t fly; not now, not ever.”

On Instagram, Manalo shared a screenshot of Mulder’s post and wrote that it “gives rise to covert white supremacy and implicit bias.” He cited the featured phrases “Keep America Great,” “MAGA” and "Democrats the Party of Slavery” as contributors to “systemic racism.” 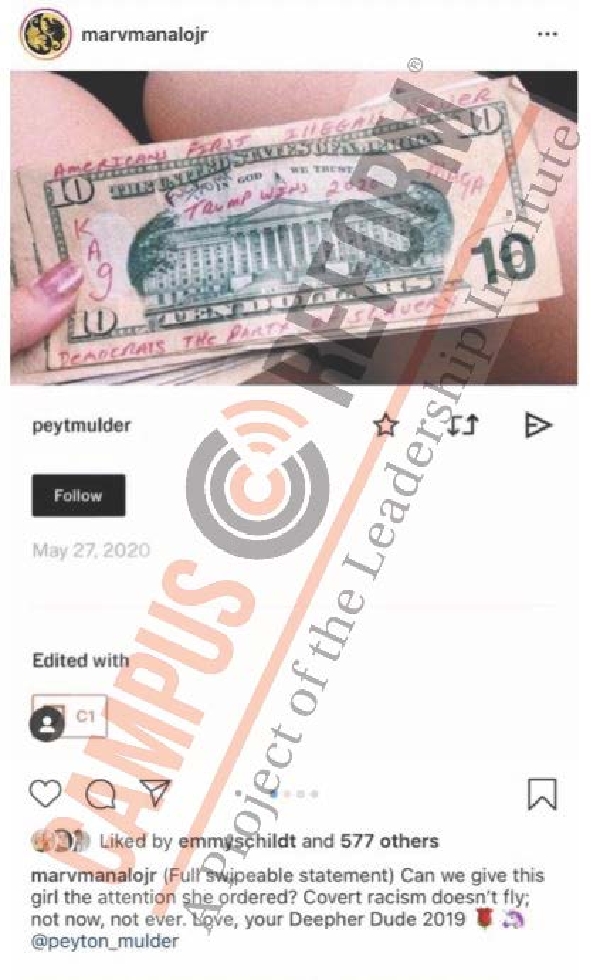 Manalo called on Mulder’s sorority, the Delta Nu Chapter of Delta Phi Epsilon, to “immediately remove” her from the organization. He also noted that since Mulder liked a tweet reading “Trump 2020” after participating in “performative activism,” she goes against the sorority’s motto of “to be rather than to seem [to be].” 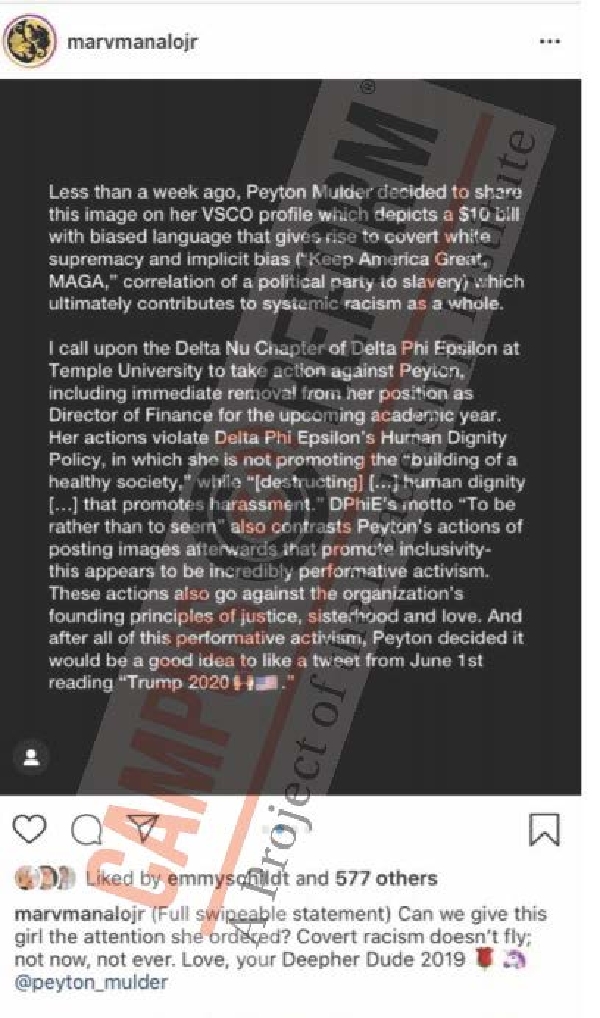 Next, Manalo called upon the Dean of Students at Temple University “to take action against Peyton” due to her “contributions to white supremacy and systemic racism.”

Manalo then tagged Manalo's employer pressuring the business to punish her.

“I would expect action to be taken against Peyton as well,” wrote Manalo, “I would be disappointed to find out nothing is being done internally to combat discrimination within your team.” 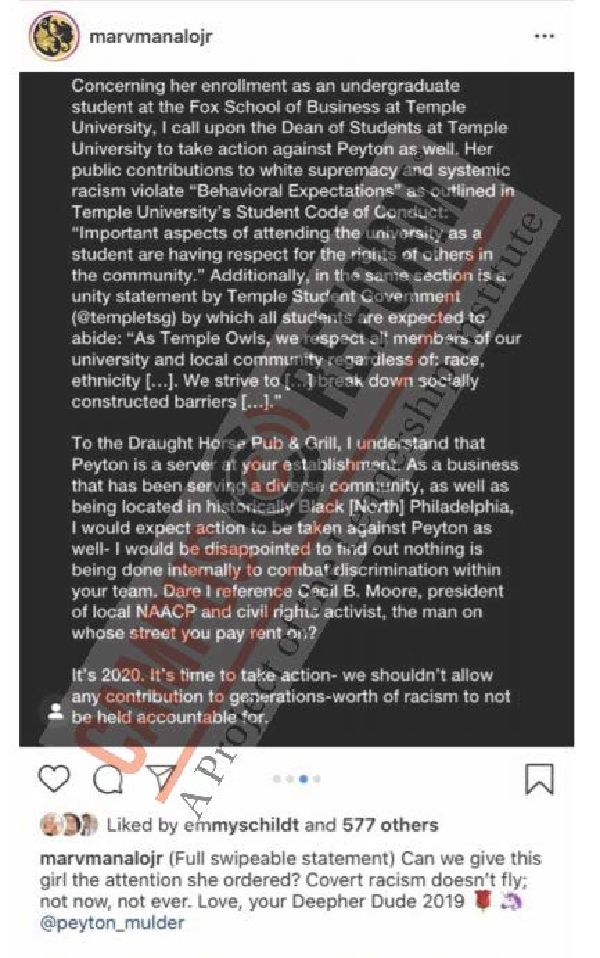 Manalo posted the screenshots on Twitter as well captioning the thread, “Can we please give this girl the attention she ordered? Covert racism doesn’t fly; not now, not ever.”

Can we please give this girl the attention she ordered? Covert racism doesn’t fly; not now, not ever @peyton_mulder pic.twitter.com/gWkBIDuVSv

The student also created a post for his Instagram story, tagging Mulder. It read, “Don’t worry, I made this story fit the aesthetics of your Instagram in case you wanted to share it on your own story.” 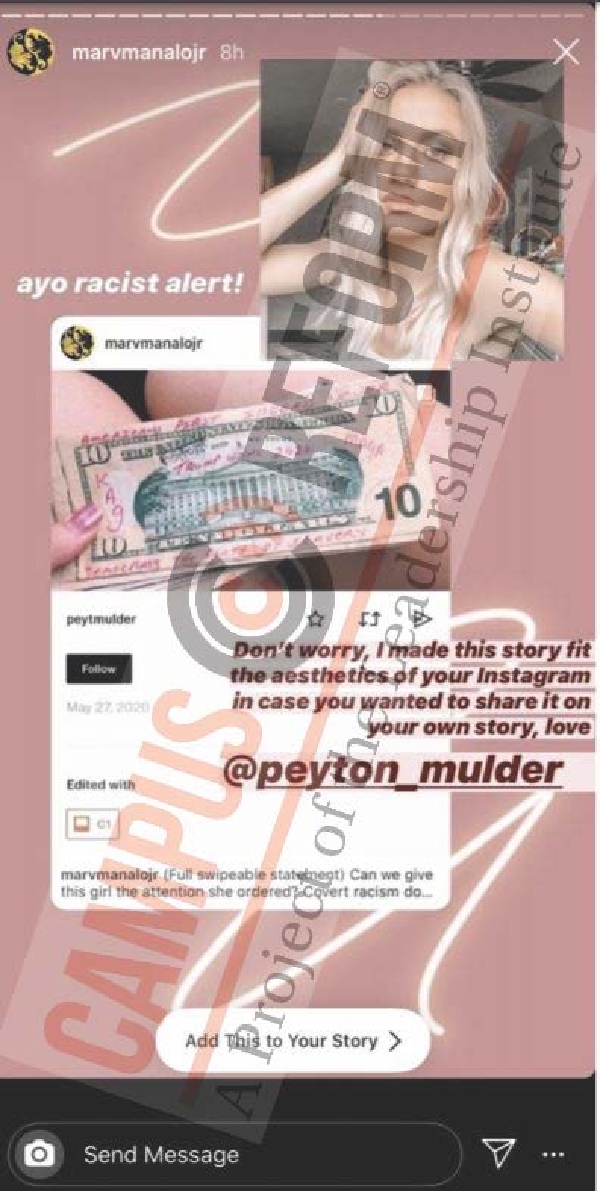 Mulder told Campus Reform the story behind her original post. The $10 bill with pro-Trump writing on it was a tip given to her sister at Round the Clock Diner. The same diner has come under fire for re-opening despite Pennsylvania’s coronavirus shutdown orders.

“The intention behind the post was a raw representation of the controversy at this time. This is history,” Mulder said.

She noted that she purposely chose not to post this on other social media such as Facebook, Twitter, or Snapchat because of the risk of backlash that comes with those platforms.  Referencing the phrase at the top of the bill, Mulder said, “I believe that America’s top concern should be its citizens. I don’t believe Americans are better than other people. These beliefs do not make me a racist.”

“I am all for immigration. However, I am against illegal immigration. It is crazy that I am being blasted for having a view that aligns with the law,” Mulder told Campus Reform.

Mulder said that the doxing has “followed [her] home,” because now there is a petition for her sister’s firing from Round the Clock Diner.

Mulder’s sorority called an emergency Zoom meeting in light of the information shared that day by Manalo. Mulder told Campus Reform that it lasted three hours and that the whole purpose of the meeting was to criticize her actions. After “balling her eyes out” and answering countless questions clarifying the situation, most members still called for her removal because they felt “unsafe.”

Mulder says she offered to reconcile with Manalo, but that the leaders of the sorority told her not to contact him. The sorority president also instructed her to remove the post and make a public apology on her Instagram story.

The sorority’s headquarters was notified of the incident, according to Mulder, but the leaders “wanted the chapter to handle it the way they pleased.” The next day, the Temple University chapter held a hearing for Mulder to present her case. It was essentially “a hearing fighting for my spot,” Mulder said.

The chapter dealt with this matter publicly on Twitter by stating its condemnation of Mulder’s actions. Despite the chapter not having any “social media standards or bylaws, they are still punishing me,” Mulder told Campus Reform.

Because she did not want to perpetuate the “public humiliation,” Mulder decided to remove herself from the chapter.

“No power in your hands. I’m stepping away,” Mulder said in regards to the sorority.

“A lot of friends were lost. A lot of friends are not speaking to me. The sorority would have expelled me. I had been publicly humiliated enough,” Mulder told Campus Reform.

Following Mulder’s decision, the sorority said on Twitter, “The sisters of Delta Nu wanted to begin the process of taking action in holding the individual accountable for the situation that has recently come to light, before addressing the rest of the community.” In an official statement, Delta Nu said, “One of our member’s social media posts that have recently come to light does not reflect the beliefs or values of our organization… We do not condone her words or posts on any social media platforms, especially given the context she has posted them in.”

The sisters of Delta Nu wanted to begin the process of taking action in holding the individual accountable for the situation that has recently come to light, before addressing the rest of the community. Thank you again, we stand with you. (2/2)

Since the incident, Mulder has received numerous hate-filled messages over social media such as “your insides are evil to the core,” “you’re just a white privileged bitch who contributes to everything wrong with the world,” “you might as well take temple out ya bio boo! We’re on to you :)” and “if i see you on campus it’s a wrap.“

“I've never been so low in my life,” Mulder told Campus Reform. “I can’t wait to go to sleep and I hate waking up. This has put me in a really dark place.” She added, “My friends have told me they have all been getting so much hate that it is taking a lot to be friends with me. And people are threatening to not be friends with them anymore if they continue to associate with me."

However, Mulder revealed that there has been an outpouring of support and “definitely have been more positive messages than negative ones.”

When asked about how the university has handled the situation Mulder said, “I love Temple so much. The Dean called me because I was the 10th or 11th student blasted, so she wanted to tell me the university cannot take disciplinary action because there is no speech code. Nonetheless, if any threats are made, she advised me to contact local police.”

“Temple is great and I couldn’t be more grateful,” Mulder continued.

When asked what she would say to Manalo if she had the chance, she said, “it would have been better if he would’ve reached out to me and we discuss our disagreements instead of just blasting me. He does not know me or my character. He came after my job, my sorority and wanted me to be expelled. I'm sure he feels really good about what he did, but if his goal was really to educate others, this did not accomplish that.”

A senior at Temple University who asked to remain anonymous told Campus Reform, “If this behavior is allowed to occur by a student government official that is supposed to be representing all Temple students, I'm concerned that more bad things will happen to other conservative students on campus.”

Mulder's sorority, Delta Phi Epsilon, did not respond to a request for comment in time for publication.