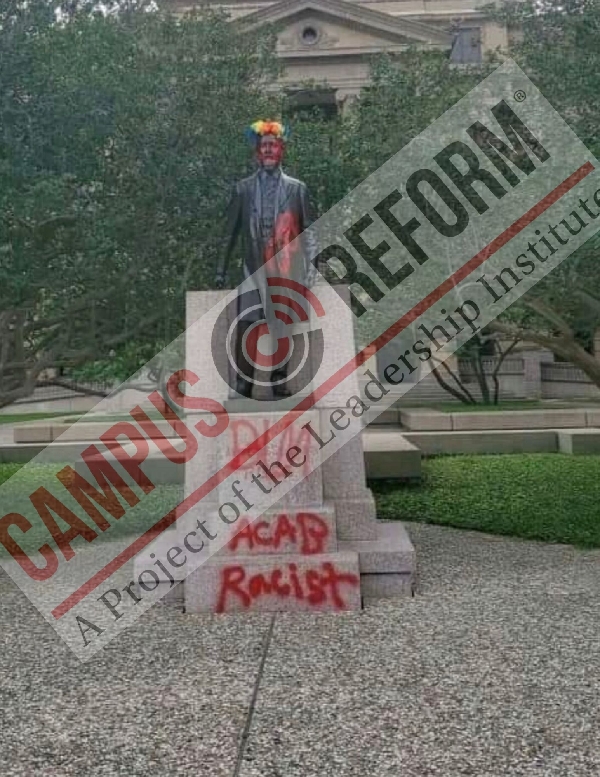 As some Texas A&M students are demanding the removal of the statue of former university president and Texas governor, Sul Ross, over claims of his ties to “white supremacy,” a rival campaign has emerged, bent on keeping the monument.

A statue of Lawrence Sullivan “Sully” Ross stands at the center of the Texas A&M campus. Ross served as the 19th Governor of Texas, a Confederate States Army general during the American Civil War, and president of the Agricultural and Mechanical College of Texas (now Texas A&M University). He is often credited with saving Texas A&M from the risk of closing its doors in 1891.

“The reason we are defending him is based off of his contributions to Texas A&M."

Ross has been revered by Aggies for decades. Many of Texas A&M’s long-held traditions were established during Ross’ tenure such as the Aggie Ring, Aggie Band, the school's rivalry with the University of Texas, and its student publication The Battalion.

“Sully” from the beloved Pixar film Monsters Inc. was named after Sully by A&M film graduates who worked on the movie.

The statue now at the center of the controversy was erected in 1918 in front of the academic building in the center of campus. One of the most popular Aggie traditions is that students put pennies at the feet of the statue before taking a test for good luck. It would not be unusual for a passerby to see gift cards, flowers, cash, and debit cards at Ross’ feet during the school year.

Student Margarita Zollo made the case for the years-long campaign for Ross’ removal in a letter to The Batallion, claiming that Ross “has ties to white supremacy” and “fought for racial inequality and systemic oppression” because he fought on the side of the confederacy.

Zollo asserted that the statue is harming the “emotional and mental well being of current, former, and future Aggies.”

In 2018, Texas A&M Chancellor John Sharp responded to Zollo’s letter requesting the removal of the statue. He cited Ross’ creation of health facilities for black Texans that were nonexistent before his governorship and the fact that he saved one of Texas’ black only colleges, Prairie View A&M, as evidence that Ross was not a racist figure. He stated that Ross had “NO ties to white supremacy” and that the statue would remain “forever.” 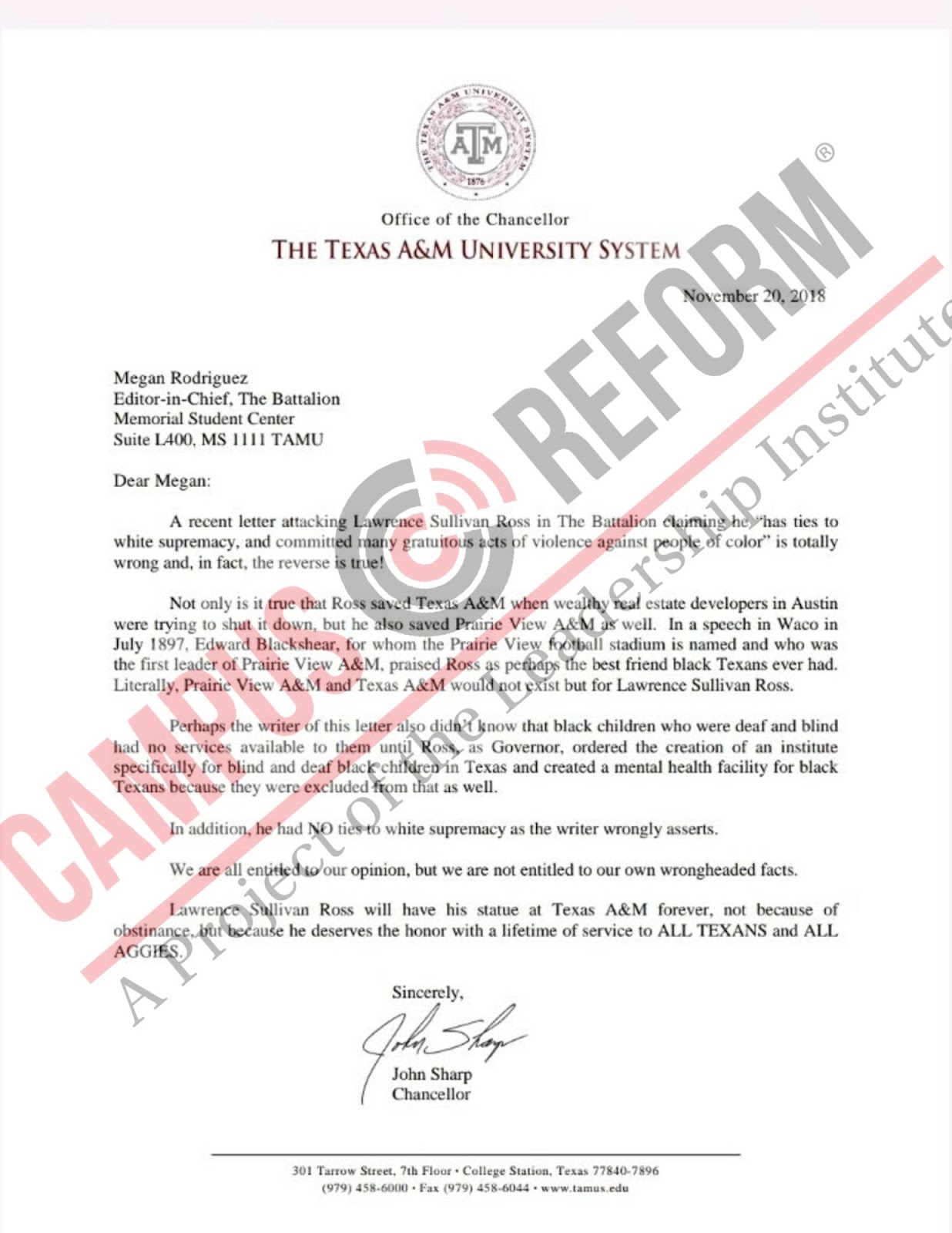 Now, with racial tensions at a high after the death of George Floyd, students at Texas A&M are again demanding the statue’s removal. More than 20,000 people have signed a petition rallying for this change.  As a counter, another group of students started a competing petition supporting the Sullivan Ross statue. This petition has also amassed more than 20,000 signatures.

On June 9, the statue was vandalized with paint and a rainbow-colored wig. The acronyms “BLM” (Black Lives Matter) and “ACAB” (All Cops Are Bastards) as well as the word “Racist” were painted in red on the monument.

“Seeing the blatant disrespect towards the Sully statue absolutely breaks my heart. I have put more pennies on his statue than I can count and it’s one of my favorite spots on campus,” a junior at Texas A&M who asked to remain anonymous told Campus Reform.

“It’s heartbreaking to see such cherished traditions and a beloved man’s legacy defaced. This wasn’t protesting, this was vandalism and it should not be tolerated on campus, especially this one,” the student added.

Texas A&M employees responded by covering the statue with a tarp and adding a fence around the perimeter. According to The Eagle, university police say they are investigating the vandalism and that there may be security footage.

The Young Democratic Socialists of America chapter at Texas A&M is holding a “Bye Bye Sully Ross Protest” on June 13 to peacefully “fight for the safety of black students on campus.” In response, Aggies in support of the statue’s standing have organized a “Rally Around Sully” at the same time to “celebrate the contributions of Sull Ross” and “protect history.” 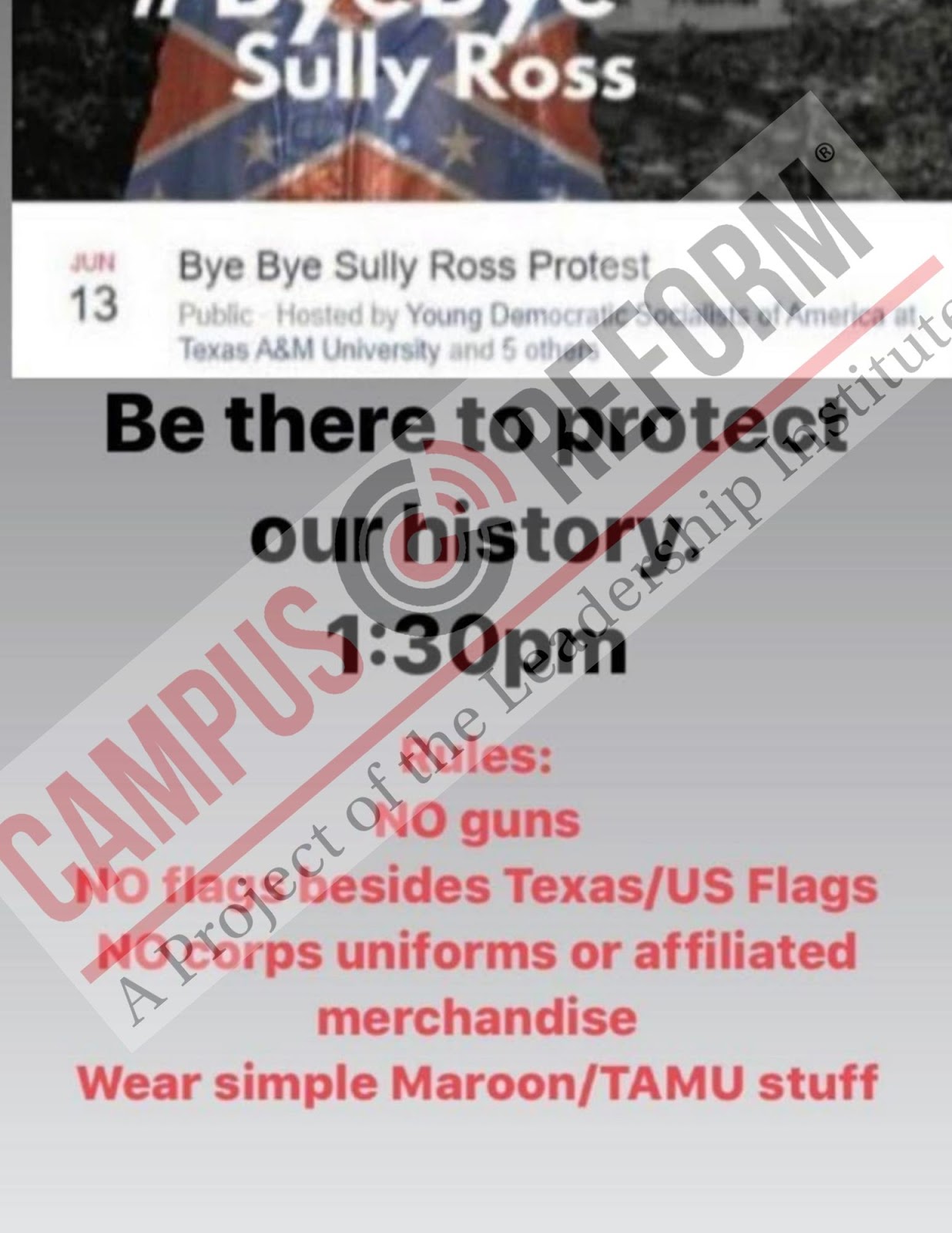 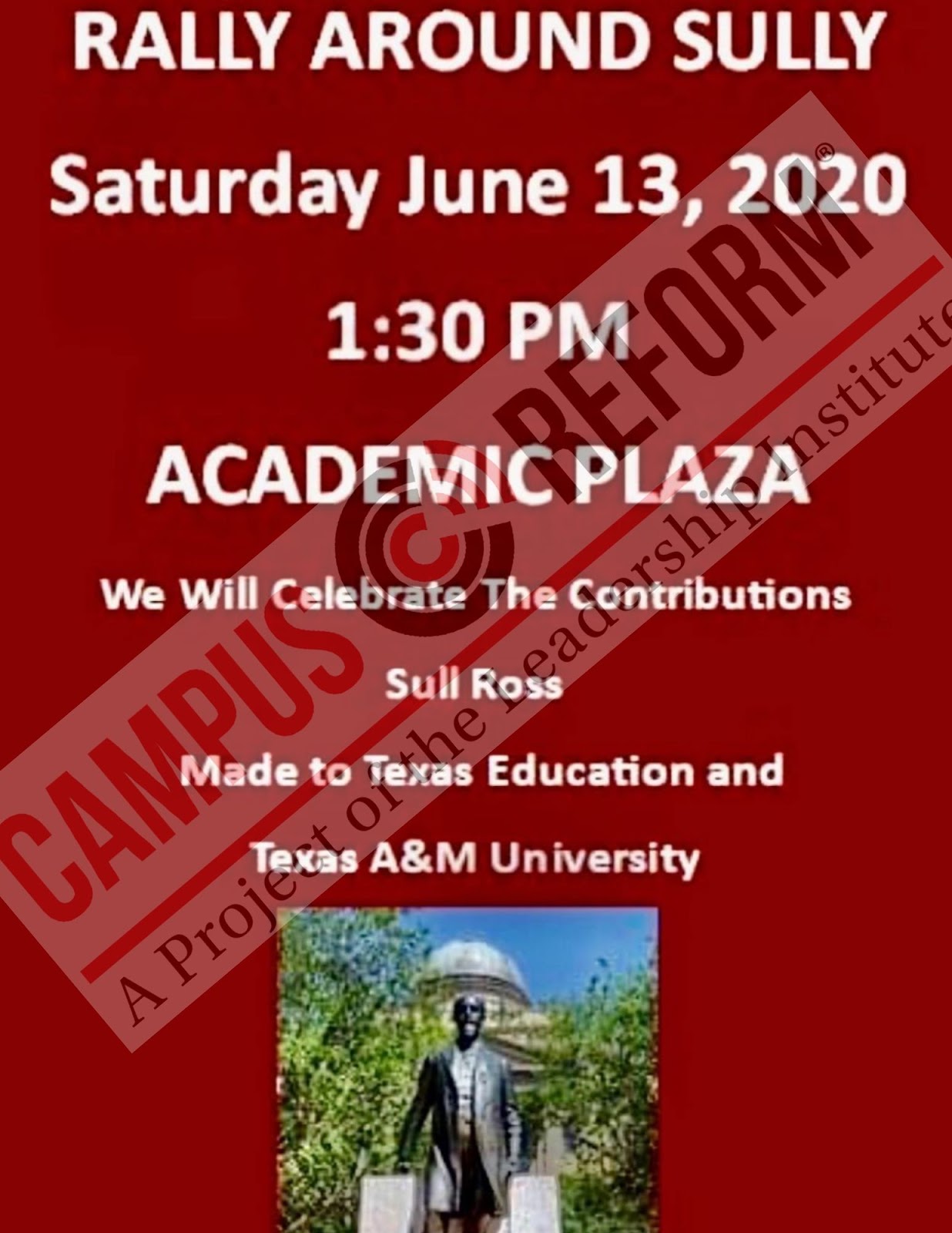 Sammy Travis, a freshman at Texas A&M and one of the loudest activists for keeping the Ross statue, told Campus Reform that Sully is “monumental to the university’s identity.”

“Defending Sully has nothing to do with racism or white supremacy,” Blake Martin, a junior at Texas A&M, told Campus Reform. “The reason we are defending him is based off of his contributions to Texas A&M. Without Sullivan Ross, Texas A&M would have been shut down, as well as Prairie View A&M."

When asked how the statue’s removal would affect Texas A&M, Travis said, “Nothing would change. Racism is not ended by taking away a statue. I read people saying they feel so oppressed. I don’t understand how a statue of a 60-year-old man makes anyone feel oppressed. It cannot reach down and physically harm me.”

“It is our responsibility to keep alive the overwhelming good that this man did while realizing he had his flaws,” said Martin. “Texas A&M is steeped in tradition, and if Sully goes we will have lost a major tradition that Aggies have loved for generations.”

“I want the record to show that not every minority feels the same about Sully. Some people don’t like him. Some people love him. I love him,” Travis told Campus Reform.