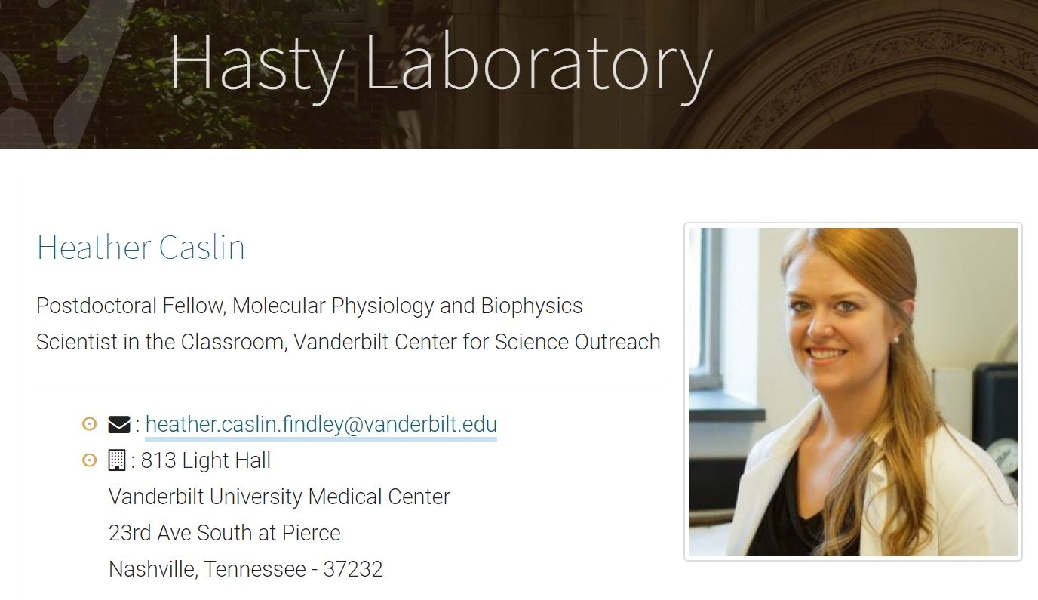 As instances of rioting, looting, and statue-toppling escalate nationwide, millions of Americans are demanding a police-free country in what they say as a form of racial justice. But Vanderbilt University scientist Heather Caslin Findley says that “white supremacy, racism, and prejudice” are also perpetuated by the concept of “academic freedom.”

“I hope there are a lot of circles in academia having a serious conversation on how 'academic freedom' upholds white supremacy, racism, and prejudice,” Caslin Findley tweeted June 9.  Campus Reform reached out to Caslin Findley asking her to clarify her statements. She immediately made her account private, opting not to respond for comment.

“I hope there are a lot of circles in academia having a serious conversation on how 'academic freedom' upholds white supremacy, racism, and prejudice."

While Caslin Findley has taught courses at Vanderbilt in past years, she currently serves as a Vanderbilt “Scientist in the Classroom,” a program that places her as an instructor in K-12 classrooms once a week. 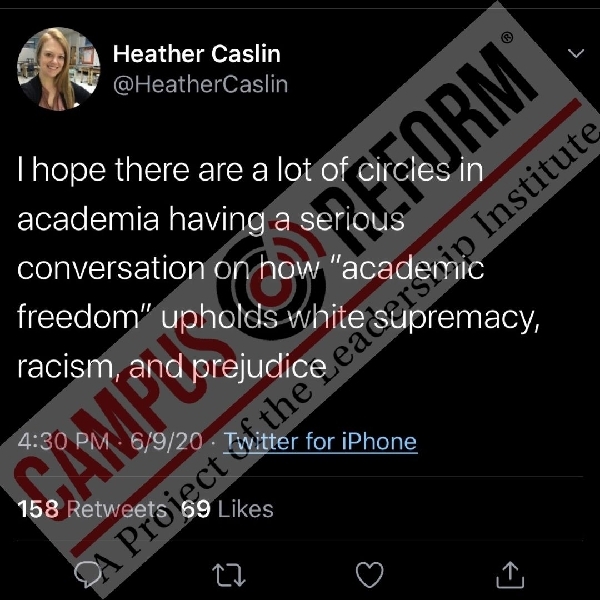 Caslin Findley has been very outspoken on social media about her beliefs. On May 30, she wrote a blog post titled “The uncomfortable work behind pulling back the curtain of race and white supremacy: Part 1. My story,” in which she espoused the same sentiments toward the “racism” within the American educational system.

“Racism acts through every system we’ve built including education and healthcare and safety and no one in my life was immune from that,” wrote Caslin Findley.

“I’ve begun to understand how the very institutions I believe in- like higher education and healthcare and feminism and science- are all built on white supremacy,” she added.  Caslin Findley also addressed the violent riots taking place across the country, writing that she was initially opposed to the 2015 Baltimore riots and was worried for the police officers, but changed her mind.

“The single biggest moment in my journey thus far was when Freddie Grey died in custody and the city of Baltimore erupted in riots. I posted about how wrong his death was. But I also posted about how I wanted the cops to be safe too,” Caslin Findley wrote before expressing she came to change her mind. “I was scared for the fires, for the rioting, for the storefronts that would need to be rebuilt. That was my ‘protest differently,’ ‘all lives matter,’ and ‘blue lives matter’ moment. I was wrong and I was called out.”

Campus Reform reached out to Caslin Findley a second time for comment on this statement, asking for its context. Caslin Findley then made her Instagram account private and removed from her profile a link to a document about abolishing and defunding the police. The document states that there is no evident "need" for policing, and that police reform is not enough.

“[T]he arguments I’ve seen are that we need police (evidence not really there) and that reform can work (evidence contradictory), however what 'works' means is very subjective,” the document reads.  Originally posted and seemingly written by Caslin Findley, the document provides several arguments for defunding the police, as well as a list of resources that argue for similar policies.

The writing details what defunding and abolishing police would look supposedly look like.

“Defunding is a long term gradual strategy to strategically reallocate resources, funding, and responsibility away from police and toward community-based models of safety, support, and prevention. Abolishing aims to set the bar higher and the goals longer- to really completely transform policing as we know it by removing many of the ‘reasons’ we think we need police in the first place. Objectives are to get police-related deaths down to zero and to set in place long term community improvements,” the document continues.

“Academic freedom doesn't count political scores. Its existence is important to the pursuit of truth and therefore the mission of higher education,” Layton told Campus Reform.

“To say that it ‘upholds white supremacy, racism, and prejudice’ is outright false. It's academic freedom that has protected professors, regardless of race, who have argued for greater accountability of police and within the justice system, especially when the research is unpopular either on-campus or socially,” he added.

“I wholeheartedly agree with the defunding of police. The entire system is extremely corrupt. Racism is just one of the problems that the American police system upholds,” Werner told Campus Reform. “Having worked with the Vanderbilt Prison Project, I have read about and even met victims of mass incarceration, criminal profiling, or unjust treatment towards African American people. I've been very happy to see students at my school getting more involved in protesting our corrupt criminal justice system.”

“I would argue that a research university should compel their professors, whom they are paying to research, to be inclusive and study these topics,” Werner added. “I don't know much about academic freedom, but I do know that most researchers at Vanderbilt tend to be white, upper-class people who benefit from a lot of privilege. This in itself is not a negative, but it does provide incentive to shirk from the civic responsibility of drawing attention to racism in our country and academic environments.”