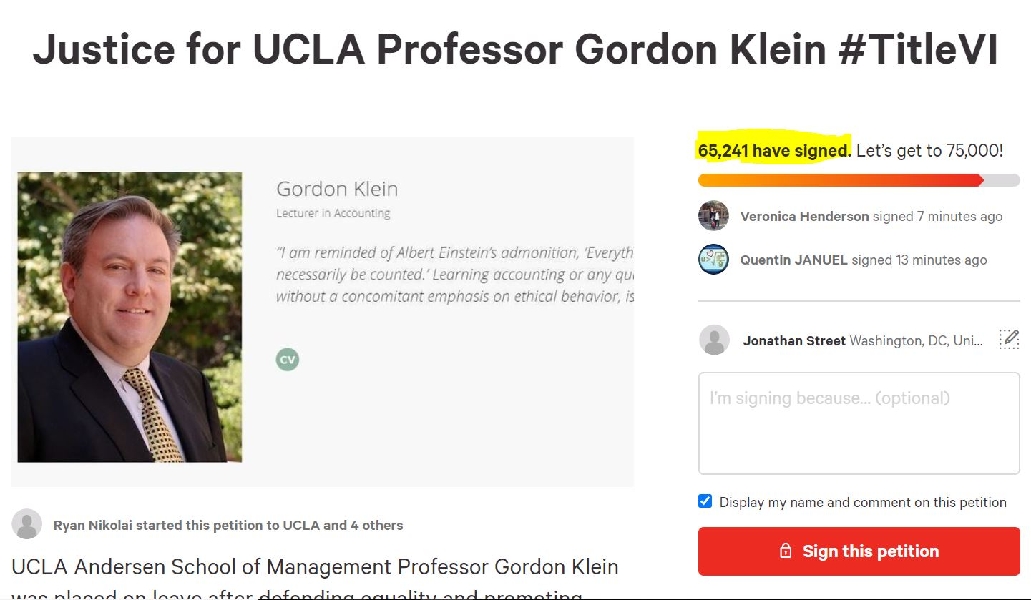 The Foundation for Individual Rights in Education issued a statement in defense of Gordon Klein, the UCLA professor who was suspended over an email in which he refused to provide special accommodations for minority students following the George Floyd protests

FIRE called on UCLA to “immediately reinstate" Klein after he "declined to alter his final exam schedule or grading policies for black students during the protests surrounding the killing of George Floyd.”

"Professor Klein's story is an example of a university responding to these calls incorrectly by disciplining a faculty member for his protected expression.”

“We remain hopeful that the university will uphold Professor Klein's rights to freedom of expression and academic freedom by rescinding his suspension,” FIRE’s Katlyn Patton told Campus Reform Tuesday. Patton authored FIRE’s letter to UCLA requesting Klein’s reinstatement. When asked about the possibility of FIRE taking legal action, Patton said, “we have not yet received a substantive response from the university, and will evaluate next steps when we do receive one.”

“We've seen countless instances of colleges and universities being called upon to investigate students and faculty for their expression recently,” Patton explained. “Right now, Professor Klein's story is an example of a university responding to these calls incorrectly by disciplining a faculty member for his protected expression.”

Patton concluded, “As a lecturer at a public institution bound by the First Amendment, Klein has significant rights to manage the content and direction of his course, and his disagreement with the students' reasoning in the email at issue in this case does not amount to harassment or unlawful discrimination.”

Additional support for Klein has come in the form of a second Change.org petition, this one calling for “Justice for UCLA Professor Gordon Klein.” The new petition has garnered more than 60,000 signatures since it was created, three times more than the original petition calling for Klein to be fired, which had more than 21,000 signatures at the time of publication of this story.

“What Professor Klein said was not filled with racism, yet he was targeted and doxed, perceivably threatened and called a racist by people across the country,” the petition supporting Klein reads. “It is a much better lesson for students that there is always room to grow and learn, overcome any bias instead of a lesson that one mistake will cause you your entire job, career, livelihood.”

The UCLA Undergraduate Students Association Council spoke out against Klein, however. A statement, which was signed by leaders of the USAC, Afrikan Student Union, and many other student organizations, alleged that “Klein blatantly and indignantly invalidated his students’ concerns,” adding that Klein “made multiple problematic statements, one after the other, within the length of the email.”

The USAC’s letter went on to say that Klein’s email, “twisted Martin Luther King Jr.'s words to validate his insensitive and demeaning response.”

Klein’s original email had questioned whether a policy that graded black students differently might “run afoul of MLK’s admonition” that people “should not be evaluated based on the ‘color of their skin.’”

“UCLA’s Undergraduate Campus Leadership stands by UCLA administration’s choice to suspend Professor Klein,” the statement declared. “Further, we call for complete termination of Klein from his position. It is our sincere hope that the University remembers the words it delivered to its students, staff and faculty that Black lives do matter, and that they begin to honor these statements by properly protecting students and holding faculty accountable.”

The UCLA Young Democratic Socialists were one of many student organizations to endorse the statement.

However, the Bruin Republicans at UCLA issued a rebuttal of the student association’s letter on the organization’s Facebook page.

“The mob at UCLA has set its target on Professor Klein to destroy his reputation and livelihood," the organization said in a post. “Cancel culture is alive and well but nothing we haven't seen before. It's interesting to note that all of our student government UCLA's Undergraduate Students Association Council (USAC) signed onto this letter,” the post continued, “which shows how dogmatic their ideology is.”

To conclude, the Bruin Republicans wrote, “this type of cancel culture ruins academia. If you say the wrong thing or come to the wrong conclusion, suddenly your entire career is over. UCLA should reinstate Professor Klein to show that they stand for free speech. The suspension was wrong and it should be overturned.”

The USAC did not respond to requests for comment at the time of publication.