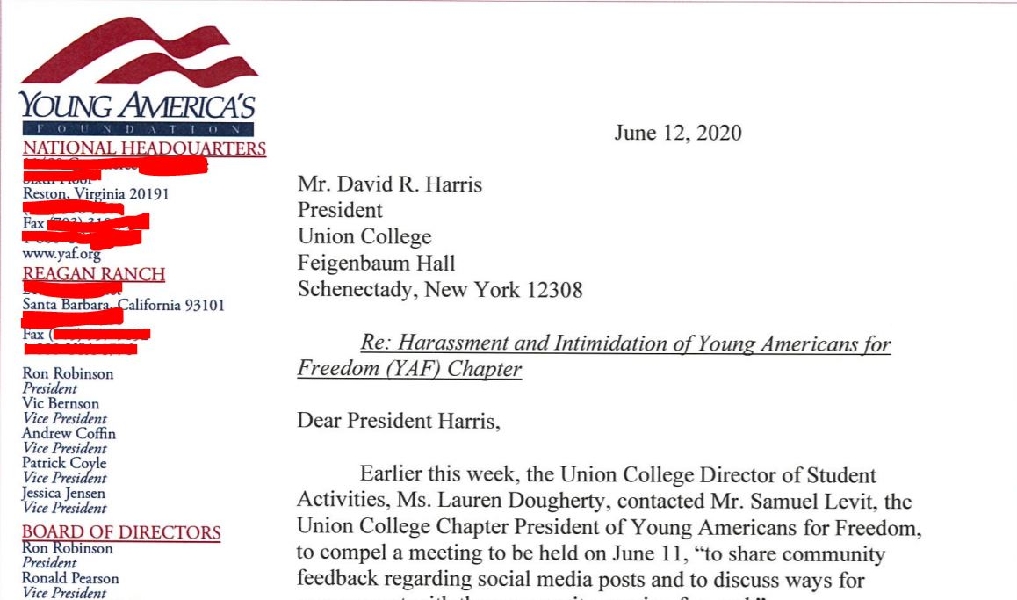 A Young Americans for Freedom chapter at Union College was targeted after an Instagram post discussing the recent events surrounding George Floyd's death.

The group's Instagram post said, “YAF Union College mourns the unjust killing of George Floyd, a clear example of the use of excessive force and abuse of power by a law enforcement officer...Supports the right of all Americans to peacefully protest and to petition the government, rights guaranteed by our constitution, which we hold dearly...Condemns the use of violence, looting, and vandalism, as a means of promoting a political message, as it hurts the communities, people, livelihoods, and cohesion of our country, and is a fundamental affront to law and order...Rejects the false and damaging narrative that our justice system and law enforcement systematically act in a manner that is based, brutal, or unfair, while acknowledging the unfortunate reality of appalling and unjust outlier cases.” 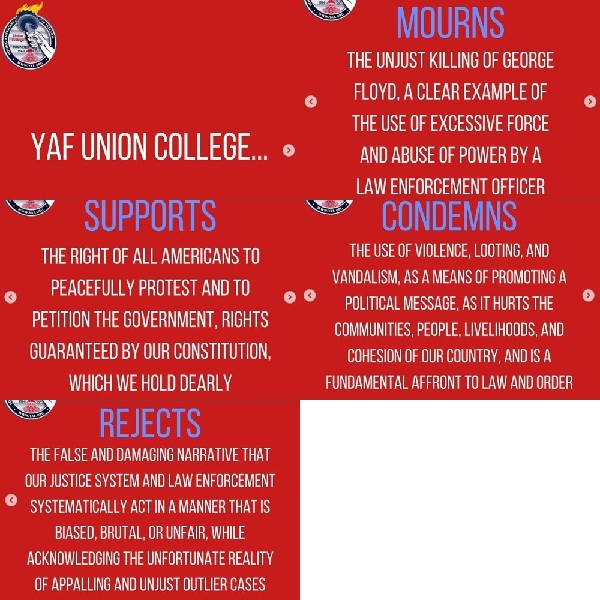 Responses to the post included, “I advise you to take this post down. It’s disrespectful and inaccurate. Not only do you have a plethora of online resources that can educate you on this matter, you have a number of students and faculty members of color who would very much disagree with that last statement. Good attempt but try again.”

Another response to the post was, “Being that this is a college organization and you made a statement essentially DENYING that the policing and criminal justice system are corrupt when they were BUILT on the foundation of slavery and a MULTITUDE of resources have been circulating the internet exposing the entire system as being so inherently racially biased is quite disappointing.” Several posts referred to the conservative group as "nazis," while others called the post "hate speech."

Students at the university then called on the school to demand that the YAF members’ information be available to all students as a right.

An Instagram post followed, according to Young America's Foundation, suggesting to “keep an eye out on all of their posts and if you think ANYTHING goes beyond free speech and approaches hate speech, email a screenshot to the school. Read through the code of conduct and if you find something that breaks that, also inform the school." The same post encouraged students to email the school for the members' contact information, saying that they "can't hide behind the curtain of social media anymore."

YAF reported that Director of Student Activities Lauren Dougherty reached out to them after multiple student requests regarding its leadership.

Upon receiving the email, YAF’s legal team sent a letter to the university, which stated, “Even the most basic, cursory review of the facts and circumstances by Ms. Dougherty surrounding the inquires from these 'few students' would have quickly revealed their unabashed intent: as far-left agitators they wanted to gain access to the names of YAF members in order to threaten, harass, and intimidate them into silence."

“Their plan was and remains to 'cancel' YAF’s right to exist and participate in the free exchange of ideas. Any reasonable person, especially a seasoned educator like Ms. Dougherty, could see what was happening.” the letter added.

Samuel Levit, Union College YAF Chairman told Campus Reform, “The story has continued to spread over the last several weeks. Rather than the simple fact that our names and contacts were released, the issues that should be stressed is the dangerous precedent it sets of not respecting and protecting students' privacy and safety."

“The school, knowing full well that we were being slandered by vile comments and disgusting labels, insisted on following their unwritten 'practice' of releasing this information.” Levit added.

Union College did not respond to a request for comment in time for publication.