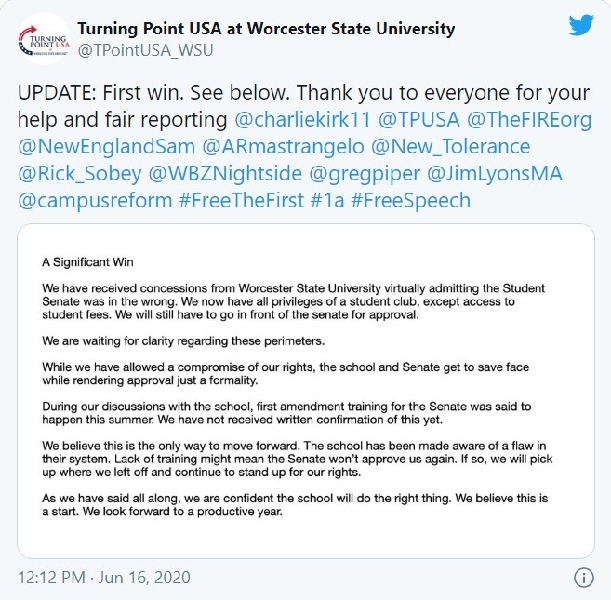 A conservative group has emerged victorious on a Massachetsts campus after previously being denied recognition by the college’s student government association.

“The school has been made aware of a flaw in their system."

The conservative organization on campus had been previously rebuked by the student government association on the grounds that it would result in a “negative impact on campus climate." Alvin Marchena and Anothony Winship, the two co-founders of the Worcester TPUSA chapter, appeared before the student government association in February 2020 with their proposal to begin a conservative campus organization.

[RELATED: Student governments are still getting away with denying conservative groups based on ideology]

In March, they were notified the campus had denied their request.

In response, the Foundation for Individual Rights in Education responded with a letter to Worcester State President Barry Melony concerning "the state of freedom of association" at the university.

“We have received concessions from Worcester State University virtually admitting the Student Senate was in the wrong,” the chapter announced in a statement posted on Twitter. “We now have all privileges of a student club, except access to student fees. We will still have to go in front of the senate for approval.”

“While we have allowed a compromise of our rights, the school and Senate get to save face while rendering approval just a formality,” the group said, pointing to “first amendment training for the Senate" as "the only way to move forward."

“The school has been made aware of a flaw in their system. Lack of training might mean the Senate won't approve us again. If so, we will pick up where we left off and continue to stand up for our rights,” the group said. “As we have said all along, we are confident the school will do the right thing. We believe this is a start. We look forward to a productive year.”