The boycott, organized by activist and advocacy groups, targets Facebook for allegations of tolerating hate speech and allowing misinformation to spread on its platforms.

Universities that have joined said they wish to help combat intolerance and falsehoods online.

A recent boycott effort calling on organizations to cease advertisement on Facebook and its properties is gaining traction among academic institutions. 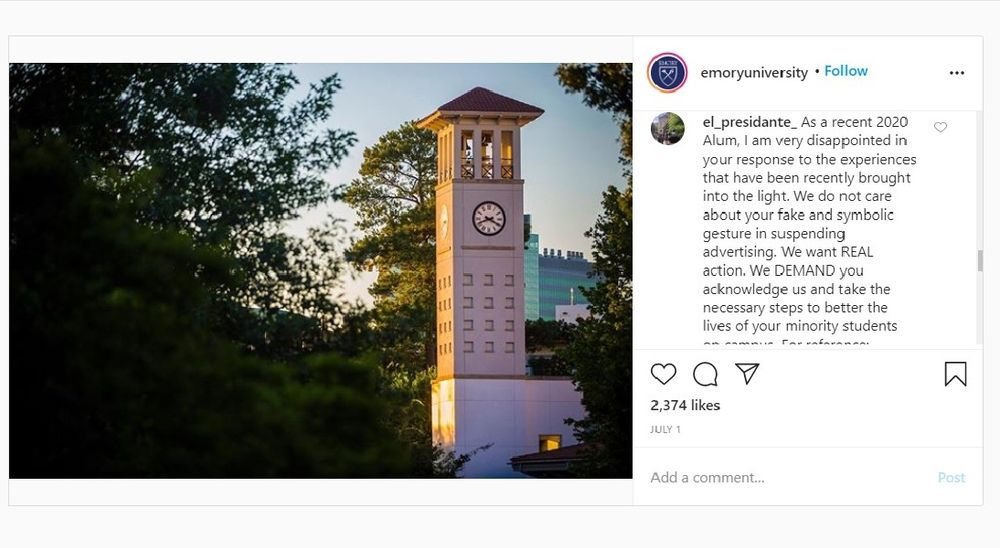 A number of higher education institutions are joining with organizations like Ben & Jerry’s and the Southern Poverty Law Center to boycott Facebook’s advertising services. A running list of those pulling ads can be found here.

The campaign behind the boycott, “Stop Hate for Profit," arose from a coalition of activist groups (the ADL, NAACP and several others) seeking to reform Facebook and stem the flow of “hate and disinformation” on the platform. Among its list of “recommendations,"  is a call for the removal of groups dedicated to “white supremacy," “climate denialism," and “militia," among other things, as well as increased moderation of speech and support for victims of harassment. The campaign states that its own recommendations “are not sufficient, but they are a start.”

At least 35 colleges, universities, and institutionally affiliated entities (like university offices, graduate schools, and publications), both private and public, pledged to join the campaign and suspend advertising on Facebook’s platforms during the month of July.  At least 29 different individual campuses are represented on the list. Among the most recent to pledge their support are Georgia’s Emory University and New York’s University at Buffalo. The institutions cite their desire to curb the proliferation of “racism”, “hate”, and “misinformation” on social media.

Both Emory and U Buffalo released statements regarding their decision to boycott via Facebook.

In the Facebook post announcing its participation, the University at Buffalo stated that “as a public university” it has “an obligation to confront racism and hate” as well as to “build a more just and equitable society."

Emory University made social media posts in a similar vein, stressing the institution’s commitment to combating bigotry and false information on Facebook’s platforms.

“We join others in calling for mindful and meaningful steps to curb hate, racism and misinformation on social media,” wrote the university.

David Gaviria, a rising sophomore at Emory and secretary of the university’s College Republicans chapter has serious reservations regarding the boycott. He believes that Emory should “stay out of politics and be neutral” stating that he isn’t “paying $72,000 a year so that Emory can push a liberal agenda.”

When asked if he believes Emory’s participation in the boycott will produce any meaningful change, David said “no” and stated that he thinks the entire boycott is “pointless." He explained that the movement doesn’t show “the economic power of POC” and will instead serve to harm participating small businesses as they cannot “absorb the losses” as easily as larger businesses.

David went on to question how much Emory actually spends on advertising, guessing that “in the end” Emory’s participation “won’t do much."

David concluded his statement by saying, “If Emory really is an academic institution that values diversity of thought” then it shouldn’t be “bias[ed]” and side “with one side of the political aisle or the other.”

Even some of Emory’s more liberally minded students were critical of the decision with the most liked comments on the school’s Instagram post about the boycott consisting of students accusing the school of not doing enough or engaging in performative activism.

In one comment, recent graduate Dante Lawson said he is “very disappointed” in Emory’s response. The alumnus went on to claim that students “do not care” about Emory’s “fake and symbolic gesture,"  referring to the school’s suspension of advertising. He closed by asserting that students want “real action” to “better the lives” of “minority students on campus.”

When asked by Campus Reform if he wished to provide additional context to his thoughts, Lawson stressed the importance of the two accounts he tagged in his posts, @blackatemory and @nbpocatemory. The two accounts feature anecdotes from minorities on campus regarding instances of bias or abuse. He went on to express frustration with Emory’s administration, angered that “instead  [of] responding to that directly” in reference to the aforementioned Instagram accounts “they post that bullshit” referring to the ad boycott.

Facebook co-founder Mark Zuckerberg said of the ad boycotts, "my guess is that all these advertisers will be back on the platform soon enough.”