The presidents of the schools are asking for the money in order to aid economic recovery from COVID-19, and have also requested funding for academic research and liability protection against lawsuits. 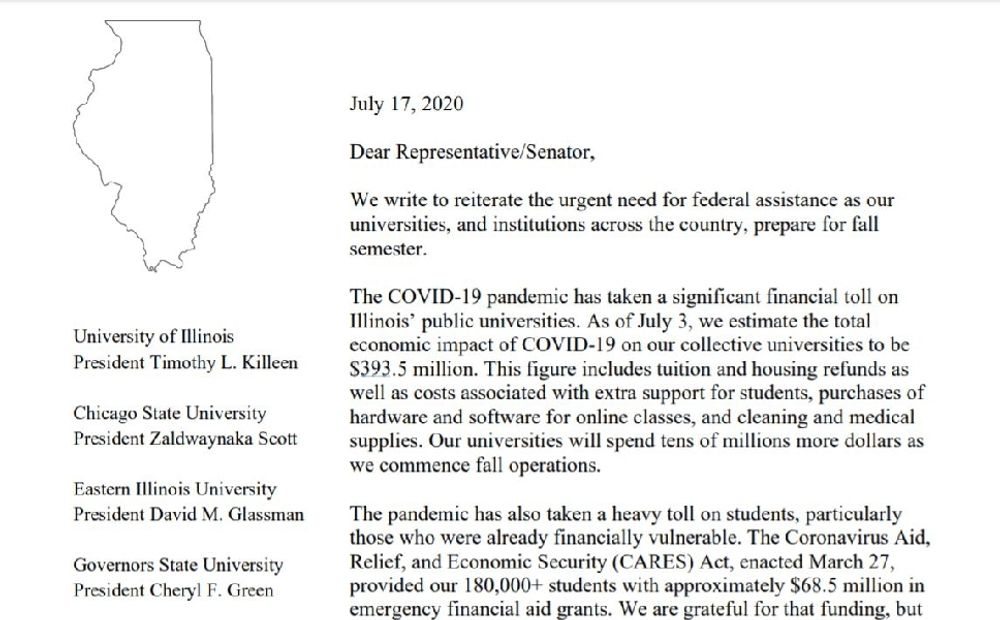 The presidents of the nine public universities in Illinois wrote a letter calling on federal lawmakers to consider the damage that Illinois schools have suffered as Congress discusses issuing another COVID-19 relief package, the News-Gazette reported.

[RELATED: Dems want to give colleges another $10 billion MORE in bailout funds]

Further, they request liability protections to defend universities from lawsuits, or “to help ensure that universities acting in good faith and following applicable public health standards do not face expensive and time-consuming litigation.” They’re also looking to obtain refundable tax credits for employees at public institutions, which would expand benefits such as paid sick leave.

[RELATED: Colleges nationwide are bleeding money. Some might not make it.]

The impact to the Illinois university system, estimated at the beginning of July, totals as much as $393.5 million, the presidents write -- a sum that encompasses refunds, resources for online learning, and cleaning and medical supplies.

"Our universities will spend tens of millions more dollars as we commence fall operations,” the letter adds.

None of the nine Illinois public universities will fully return to campus in-person this fall, however. The majority of the schools have announced their plans to reopen using a hybrid model, where students take classes both online and in-person.

Chicago State University says that its students will take the majority of their classes online.

Governors State University is not clear in its plan for reopening campus but the website suggests a number of fall courses will remain online.

Maria Copeland is a Virginia Campus Correspondent, reporting on liberal bias and abuse on campus for Campus Reform. She is originally from Herndon, Virginia and received her Associates of Arts in Communications from Northern Virginia Community College this May. She will attend James Madison University in the Fall. While on campus, Maria was Gupta Family Foundation Scholar, Vice President of the Loudoun Student Government Association, Vice Preside…