A student-created resource list is pushing students to take one of 39 racial injustice classes.

A Cornell department is providing professors with teaching resources like the 1619 Project. 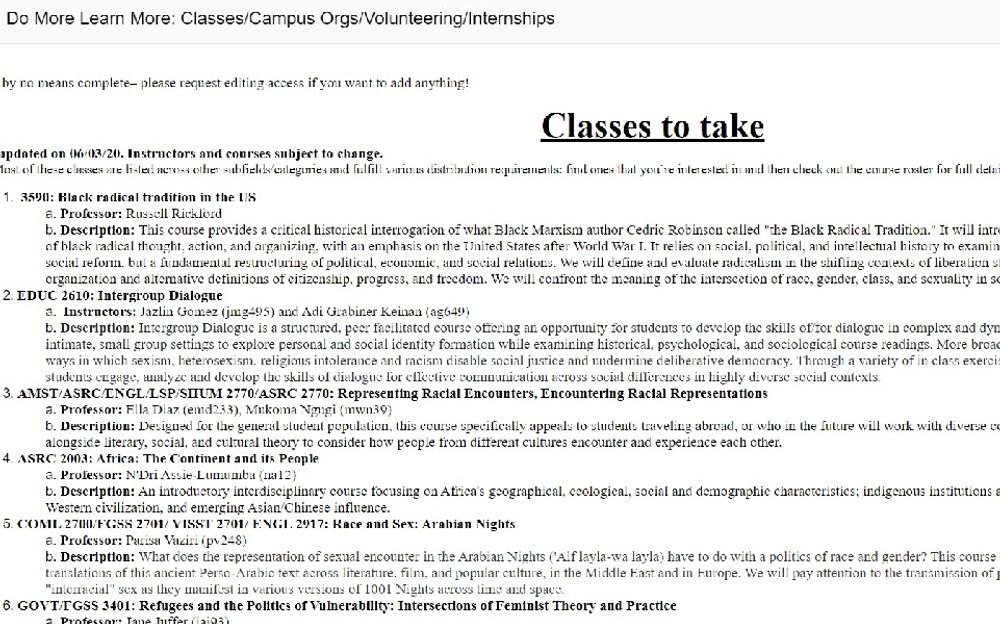 Students at Cornell University have compiled a list of nearly 40 courses on race and racism available at the Ivy League institution.

“As a baseline, as allies, we should take history classes, we should devote our time to anti-racism organizations, learning about the intersectionality of oppression,” Kottapalli said in a statement to the Cornell Daily Sun. “We need to look at our classes and think, ‘OK, let’s decolonize our schedules,’ to take classes that expand our perspectives.”

Courses on the list include “The Future of Whiteness,” “Race and Sex: Arabian Nights,” “Refugees and the Politics of Vulnerability: Intersections of Feminist Theory,” and “Prisons, Politics, and Policy.”

The same document includes links to various bail funds dedicated to posting bail for those arrested in Black Lives Matter protests. It also includes a link to a document, titled, "Anti-racism resources for white people," which includes an "articles to read" section that lists the New York Times' widely debunked 1619 Project. It also recommends a video in which author Robin DiAngelo discusses her book White Fragility.

The Cornell Office of Faculty Development and Diversity provides faculty with similar resources to “engage in conversations about race and anti-racism.” The resources range from courses for faculty members, podcasts, STEM readings, books, Netflix films, and a source of “31 children’s books to support conversations on race, racism, and resistance.”

Sen. Tom Cotton (R-Ark.) recently proposed legislation to ban the use of federal funding for teaching the 1619 project, based on the fact that it makes the false claim ”that America was not founded on the ideals of the Declaration but rather on slavery and oppression.”

In addition to the classes listed by Kottapalliand Wang, Cornell also offers a class titled “Exceptionalism Questioned: American and Europe” that aims to address whether the concept of America as an exceptional country can “be sustained” in a “world of diverse forms of capitalism.”

"In this course the liberal market economy of the United States with its distinctive strengths and weaknesses is put side-by-side with different forms of liberal, corporatist and statist market economies that characterize different European countries in the emerging European polity," the course description states.

"The diversity of capitalism points to one overarching conclusion: all of these countries are arguably capitalist, democratic market economies belonging to 'the West;' and each of them has distinctive strengths and weaknesses. Like all other countries, America is ordinary in mobilizing its formidable capacities and displaying its glaring weaknesses as it copes with change," it adds.

Cornell student Samuel Kim told Campus Reform, "the student resource list’s class recommendations are not the best way to even address racial injustice, especially in an academic setting as stressful as Cornell University."

“There are ways to have discussions about race within any major, whether it is to be historical injustice (caused by slavery or Jim Crow policies) or differing outcomes by race. Some examples include talking about the psychological effects of different family structures, studying historical discrimination in New Deal policies, or analyzing the effect of increasing school choice on the gap in educational outcomes. There are better ways to have these discussions than to force students to add more classes than they can handle,” Kim added.

“Regarding the literature, movies, and anti-racism materials, I will first premise by saying that reading more perspectives is good for one’s worldview. However, institutions that occupy a place of neutrality should not use their authority to push politically charged readings on students,” Kim continued.“Some of the anti-racist literature in the public sphere has been openly political, often ignoring the conservative plan for reducing inequality. The university should have vetted its list of resources better."

“Using words like ‘decolonize,’ especially in this tense national climate is not constructive. For someone to compare a college class to the death and suffering inflicted by imperial powers upon others is demeaning. As the descendent of Koreans who lived under a brutal Japanese occupation, I am disappointed that these words are being used in this important conversation.” Kim said.