Among the conservative leaders in their crosshairs are Ronald Reagan and Margaret Thatcher.

A petition calls for Chapman University to remove busts of conservative icons. 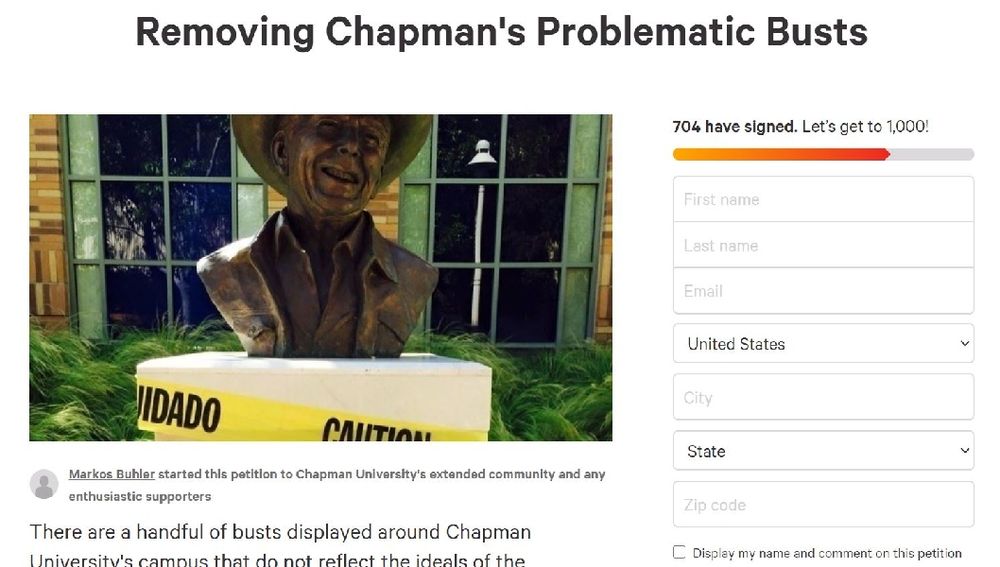 A petition at Chapman University calls for the removal of busts depicting Ronald Reagan, Margaret Thatcher, and other prominent conservatives.

With more than 700 signatures, the petition demands that the university remove and replace the "problematic" conservative icon depictions.

"There are a handful of busts displayed around Chapman University's campus that do not reflect the ideals of the University,” the petition reads. “In order to create a safer and more inclusive environment for Chapman's marginalized students and community, we feel the busts of Ronald Reagan, Albert Schweitzer, Margaret Thatcher, Milton Friedman, and Ayn Rand need to be removed and replaced."

"During these times of reckoning with serious injustice in the U.S. we are asking for your support and for the Chapman Administration to hear our demands," the petition continues. It goes on to include a letter that will be sent to the university's administration "once this petition has been shared enough."

“[W]e hope this transforms into an opportunity to recognize our history and the ways certain historical figures have abused their power at the expense of marginalized groups," the letter concludes.

Chapman College Republicans said in response to the petition, “This reckless removal of history is dangerous, especially for a University whose job is to educate in an attempt to better their students and their futures. For a school that has put so much effort in pushing for diversity, the removal of these statues would be proof that Chapman University takes no pride in intellectual diversity of their student body."

Pointing out that "diversity comes in multiple forms," including diversity of thought, the group said, “We conservatives do not push to remove parts of history that we do not like. we expect the same in return. When you remove history you cannot learn from it, you repeat people’s mistakes and we cannot better ourselves. There are many conservatives on campus who support the Republican Party and Ronald Reagan who feel they are unable to speak out about their beliefs in fear of being shunned by unaccepting members of the student body.”

Chapman College Republicans President Justin Buckner further told Campus Reform, "the main reason we felt it was necessary to speak out on this issue was that the petition claimed the statues on campus did not represent the ideals of the University, which is not true."

“The removal of Ronald Reagan,” Buckner continued, “one of the most pronounced modern-day conservative voices in American history, would symbolize that anyone who believes in modern-day conservatism has no place on our campus. We want everyone to have representation and feel welcomed at Chapman University, regardless of your political beliefs.”

Chapman University shared an email with Campus Reform that was sent to the campus community in which President Daniele Struppa wrote, "I have carefully read it [the petition] and I appreciate its emphasis on a shared reflection of who we are as an institution and how our physical campus reflects our collective values. As stated in the petition, many believe the removal of particular busts will provide an opportunity for deeper understanding of and engagement with history while creating a safer environment for students. While I am deeply committed to both of these goals, I strongly believe that the removal of these busts is counter to accomplishing those very objectives."