The Vice President of the University of Southern California student government has resigned amid "anti-Semitic" attacks. 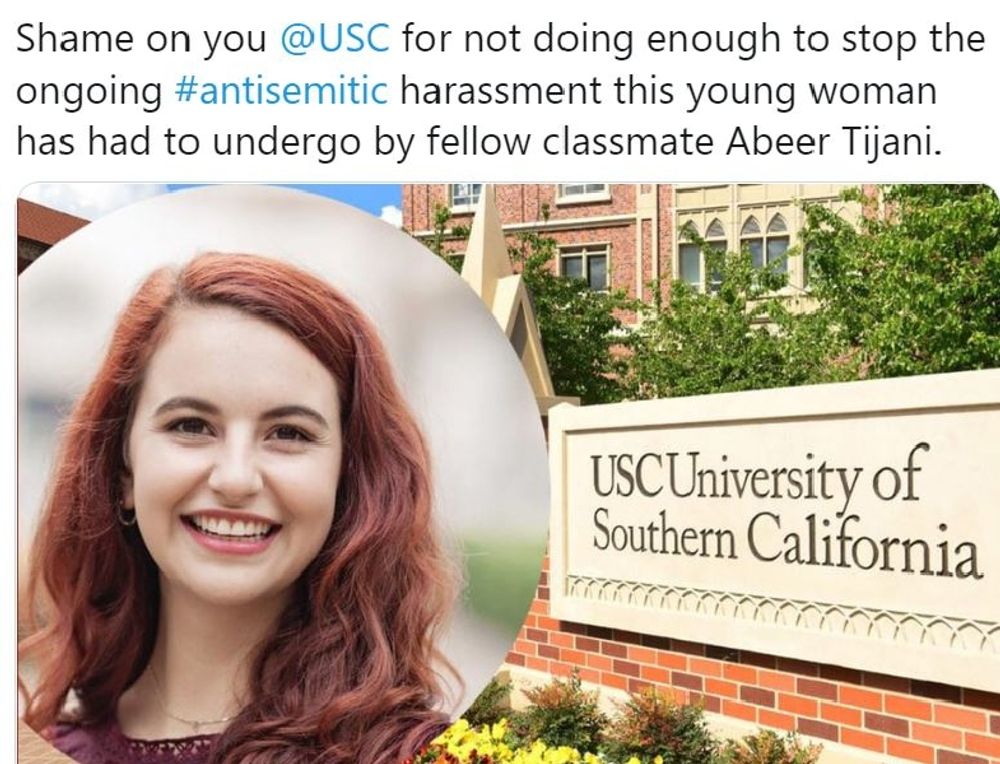 University of Southern California Undergraduate Student Government Vice President Rose Ritch has resigned from her position amid criticism that she had been silent about racism allegations within the student government.

Ritch was first pressured to resign from her position when USC senior Abeer Tijani accused Ritch of being complicit in the actions of USG President Truman Fritz, who was accused by Tijani of acting in a racist manner and engaging in microaggressions, according to The Daily Trojan.

According to the impeachment complaint, written by Tijani, Fritz was the subject of multiple Instagram posts by the @black_at_USC account, which exists to share “Black Trojans’ experiences anonymously.” Tijani then sent an email to Fritz asking him to explain the Instagram posts, but received no response.

Tijani created a Change.org petition calling for Fritz to be impeached. Throughout this process, Tijani alleges, Ritch was silent and did not speak up to address Fritz’s alleged racist actions, so Tijani then called for Ritch to be impeached.

After Tijani wrote an impeachment complaint against Ritch, the now-former vice president of the USG became the subject of multiple attacks.

[RELATED: 5 most EXTREME cases of anti-Semitism on campus this year]

I spoke to Rose Ritch, the @USC student body vp who resigned Wednesday following a weeks-long antisemitic cyberharassment campaign. Some of the screenshots are below. More here: https://t.co/NY9MrV3ZHY pic.twitter.com/bKfxHlIhiA

“USC students: I encourage you to read this and don’t forget that USG’s Vice President, Rose Ritch, has openly expressed pro-Israeli sentiment and alienated Palestinian students. Get rid of her too,” one of the alleged posts, shared by Jewish Insider, read.

“Warms my heart to see all the zionists from usc and usg getting relentlessly cyberbullied,” another alleged post, shared by the same outlet, read.

Tijani denied any anti-Semitic intentions in calling for Ritch to be impeached and stated in an Instagram post that “the REAL and primary reasons that I am calling for Rose to be impeached is because she has chosen to be complicit in Fritz’s actions and micro-aggressions and has not come forward to condemn his behavior in a swift manner.”

In a Newsweek op-ed, Ritch stated that she was “harassed on campus just for being a Zionist.”

"I was told my support for Israel made me complicit in racism, and that by association, I am racist. Students launched an aggressive social media campaign to "impeach [my] Zionist a**,” Ritch wrote. “Let's be clear: This is anti-Semitism.”

While the alleged harassment went on for over a month, USC’s President, Carol Folt, commented on the matter after Ritch announced her resignation.  Folt described the resignation letter as “heartbreaking” and that it “described the intense pressure and toxic conditions that led to her decision,” specifically noting the "anti-Semitic" attacks.

Roz Rothstein, co-founder and CEO of StandWithUs, told Campus Reform that the administration gave an inadequate response, and was ultimately too late.

“The resignation of a student government leader because of antisemitic attacks by her peers is appalling. The USC administration had ample opportunity to address those attacks and lend its support to its Jewish and Zionist students, and failed to do so,” Rothstein said. “While their latest statement is a step in the right direction, it should have come out much earlier and must be followed by strong actions to ensure a welcoming campus climate for Jewish students.”

The Hillel chapter at USC commented on the incident, posting on Facebook that “It is shameful that Rose faced this situation and not reflective of the campus we aspire to be.”

When asked if the university would take any disciplinary actions,  USC Spokesperson told Campus Reform “We are unable to discuss details of student disciplinary matters because of student privacy laws.”

Campus Reform has reached out to the student government but did not receive a response in time for publication.