GWU removed a book calling conservatives and racists "the same."

Campus Reform spoke with the author of the book in an exclusive interview.

GWU later apologized for the listing. 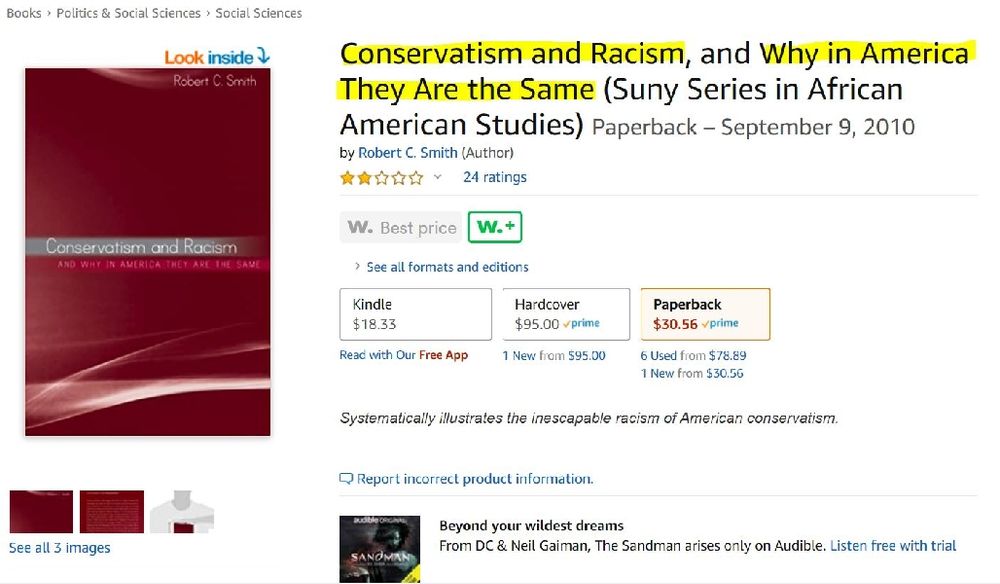 The George Washington University Office for Diversity, Equity, and Community Engagement removed its recommendation of a book that equates conservatism with racism and has since apologized.

"The Office for Diversity, Equity, and Community Engagement apologizes for the harm that members of the GW community experienced as a result of us listing a book about an author's opinion on conservative people as a resource. We removed the book and continue to engage with community members impacted," the university's website now says.

The book, Conservatism and Racism, and Why in America They Are the Same, by Robert C. Smith, published in 2010, was previously featured on the university’s “Resources on Race & Anti-Racism” page. In an interview with Campus Reform, Smith said he does believe that conservatives and racists are "the same."

"Rather that adherence to a rigid ideology of conservatism is the same as racism," Smith said.

In his book, however, Smith wrote, “Conservatism as a philosophy and ideology, I explained, is and always has been hostile to the aspirations of Africans in America, incompatible with their struggle for freedom and equality."

"Thus, very few Blacks could mourn the passing of a man who was an icon in the cause of twentieth-century American conservatism,” Smith continued, concerning the lack of African-American supporters of Ronald Reagan.

Smith’s book also explained that it does not make sense for a Black person to be conservative in the United States, and that for those there are, they not genuinely conservative.

“However, most persons usually thought of as Black conservatives - Booker Washington or George Schuyler - were really accommodationists, cowards, or opportunists. Genuine, autonomous conservatism has always been a remnant in Black thought because as Miller's Soviet interlocutors pointed out, what has there been to conserve?” Smith wrote in the book.

The book's removal from the GWU website came after multiple media reports highlighted the school's promotion of the book.

According to reports, the resource guide was removed for a short time, while the book was being removed. A Washington Free Beacon reporter tweeted a screenshot of the page before it was edited to no longer feature the nonfiction work.

The GW College Republicans have been vocal in their stance against racism amidst the recent racial unrest in America.

“We as an organization continue to advocate for a more inclusive campus and feel that our voices and perspectives are useful to that end,” GW College Republicans’ Director of Public Relations Patrick Burland told Campus Reform.

After the death of George Floyd, GW College Republicans released an article that called for Republicans to take an active part in the battle for racial equality. In the article,  Executive Director Joey Rodriguez shared an experience he had with racism and police, and condemned police brutality. He disagreed with the idea that supporting good police means that one is okay with racist police.

“...one can fully support the good work that police officers do in protecting their communities while also urgently demanding that we eradicate racism and inequality where it exists in that system. The two are not mutually exclusive,” Rodriguez wrote.

Even Smith supported the stance of the GW College Republicans.

“I applaud them. In these cases even a rigidly ideological conservative should be anti-racist because what happen[s] to Floyd has nothing to do with ideology; it’s [a] matter of human rights and their gross violation by the police officers involved,” Smith said to Campus Reform. “It should be clear, I do not argue that conservatives are racist, rather that adherence to a rigid ideology of conservatism is the same as racism.”

Burland said that GW College Republicans were not initially aware of ODECE’s initial endorsement of this book, but they were dismayed to learn of it. He was against the idea that conservatism and racism have an inherent connection, and believes that GW’s conservative students are not only not racist, but anti-racist.

“The endorsement of such a work is a stark departure from GW’s strong tradition of embracing academic freedom and civil debate,” Burland said. “The inaccurate conflation of conservatism and racism does nothing to fight racism, and only serves to further division. We are hopeful that our University will reevaluate whether or not they wish to include works that attempt to sideline conservative students who are a part of the fight against racism.”

ODECE, GW College Democrats, and GWU Black Student Union did not respond to Campus Reform’s request for comment in time for publication.

Editor's note: This story has been updated to reflect George Washington University's apology.