Before the clip ends, Poor seems to indicate that he is joking and students say that the student at whom the joke was directed was not offended by the joke.

Joel Poor, an associate teaching professor at the University of Missouri, was reportedly removed from his teaching role on Monday after a video of him joking with a student was submitted to the Office of Civil Rights and Title IX.

In the video, Poor jokes with a student after he mentions he is from Wuhan, China by saying “Oh, let me get my mask on.” 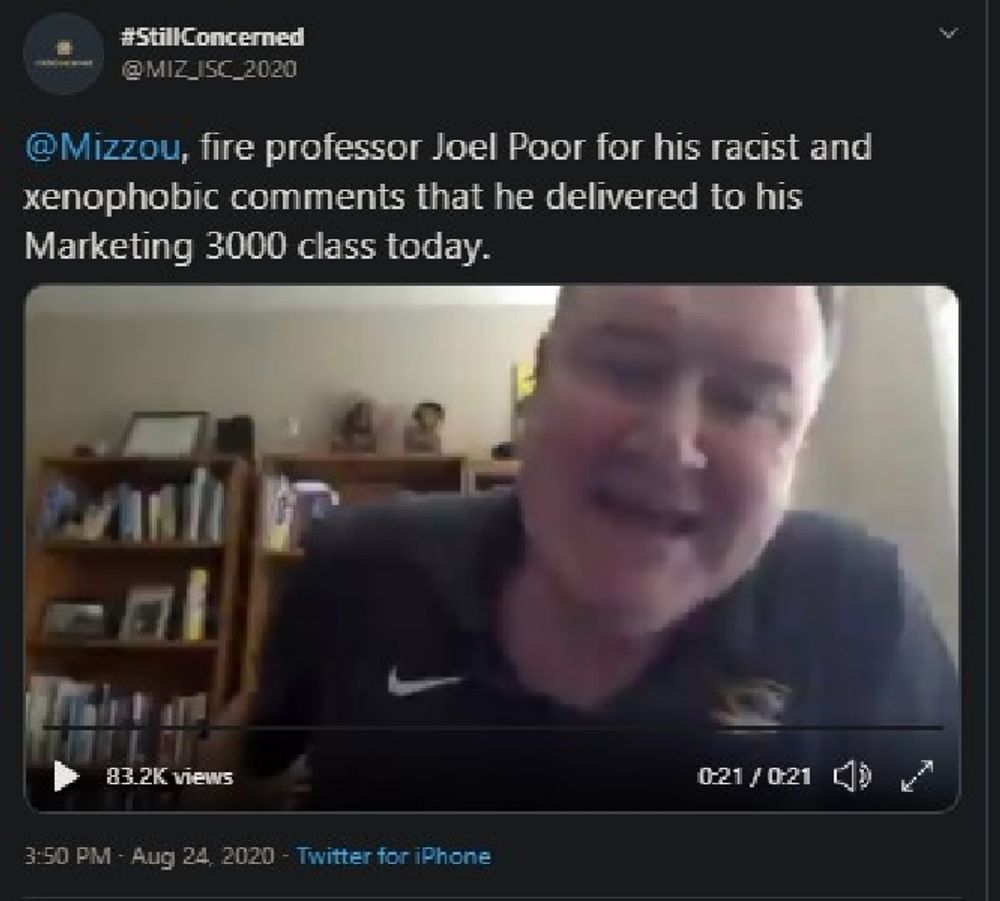 An associate teaching professor at the University of Missouri says he was "relieved of teaching duties" on Monday night after a video emerged on Twitter of him joking with a student in his Marketing 3000 class.

However, on Tuesday, the Mizzou Twitter account rebutted the claim that the professor was "fired," saying that he "remains employed at Mizzou." In a follow-up statement, spokesman Christian Basi said that the professor has been "assigned to other duties" and "will be provided due process."

In the short clip, Joel Poor asks where a student is from and the student responds that he is from Wuhan, China. Poor then jokes “Oh, let me get my mask on,” and motions as if putting on a mask. Before the clip ends, Poor seems to indicate that he is joking, which was what the student reportedly understood, along with other students who were in the class at the time.

“The kid was not even offended and you could clearly tell it was a joke,” one student who was in the Zoom class and who asked to remain anonymous told Campus Reform.

“I know the guy who was on the other end of this and he is from Wuhan, China. He has told me he was not offended and he thought the professor was just joking with him,” Nathan Etheridge, a Missouri student tweeted.

Missouri student Lourdes Torrey tweeted out earlier in the day “one student told my class they’re from wuhan, china and my professor said “ah let me put on my mask”.... yea i’m finna report him to title IX.”

That tweet has garnered more than 500,000 favorites and seems to have sparked the outrage.

#StillConcerned, the group that originally shared the clip, said in its tweet that Poor should be fired for his “racist and xenophobic comments.”

The official university Twitter account responded, saying that it had submitted the clip to the school’s Office for Civil Rights & Title IX shortly thereafter.

In a lengthy announcement to students sent at 5 p.m. Monday night, Poor apologized for his comment but also said that the Twitter clip cut off the context of him following with “I’ve only been to Chongqing and Shanghai” and discussion with students about current travel problems between the U.S. and China.

A longer clip that was shared on Twitter Monday night confirms this. It also reveals that during the same conversation, Poor actually offered the student a room in his own home if it were to somehow alleviate travel concerns with returning to America.

Watch the entire video @Mizzou you shouldn’t have acted before getting all the information #freejoelpoor pic.twitter.com/m0pOnwlWAN

“To anyone who was offended by my comments, I sincerely apologize and I want to communicate unequivocally that I have nothing but respect and love for the Chinese people and especially my students from China,” Poor wrote. “But the most important point you need to understand from a marketing perspective is that what I did was wrong...”

He went on to explain that “perception is reality” in marketing and that he is “totally supportive of the Chinese people/students” even though “the political context here in the US is not.”

“Professor Poor was an excellent teacher in the college of business. He enjoyed laughing and he always had jokes up his sleeve that would unleash roaring laughter in lecture halls,” a former student of Poor who wished to remain anonymous told Campus Reform. “He truly cared for all of his students in class and did whatever he could to ensure that we were learning in a positive and fun environment.”

A subsequent announcement from Poor, sent just hours later and obtained by Campus Reform, reads, “Today I was relieved of teaching duties, I apologize for any disruption this might cause you.”

It was not clear whether Poor was temporarily placed on leave while the university conducts an investigation, or permanently barred from teaching. 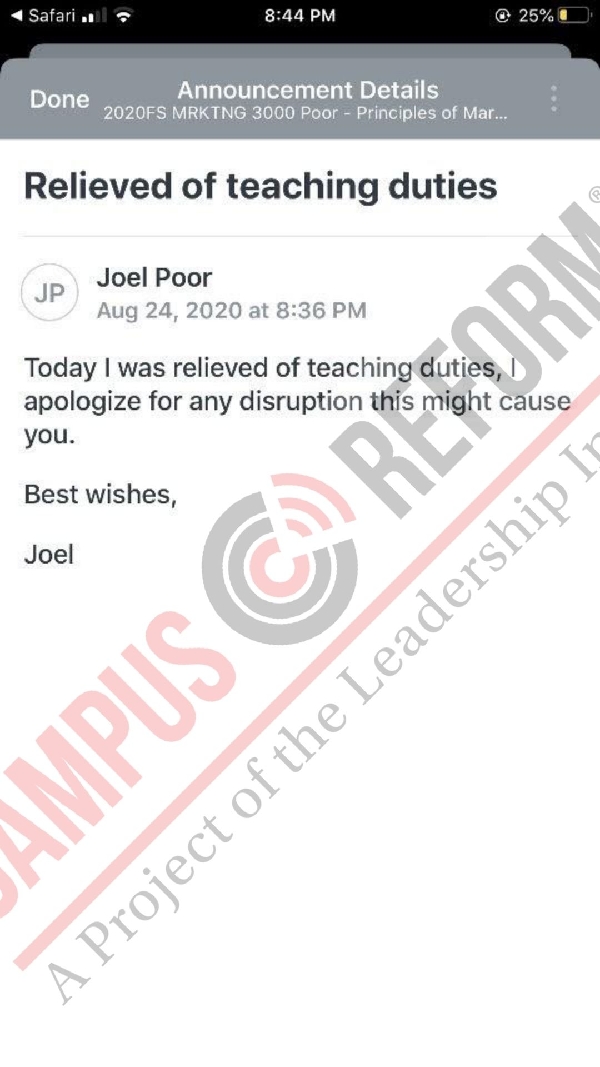 Another student present, Lacy Thompson, told Campus Reform that she is “disappointed, disgusted and disturbed” by what happened to Poor.

“Rather than resulting in the termination of teaching duties of my professor, the University should have watched the entire video to then be informed that this professor was very sympathetic toward the student and offered any help he could,” Thompson added. “Now I don't have a professor and I have a heightened fear of backlash I could get for what I believe. And that's that this was not justified.”

University of Missouri spokesman Christian Basi told Campus Reform in a statement Tuesday, "the matter was referred to our Office for Civil Rights & Title IX and they are investigating it." Basi declined to comment further "because this is a personnel issue."

The student, Poor, and Torrey did not respond to requests for comment in time for publication. 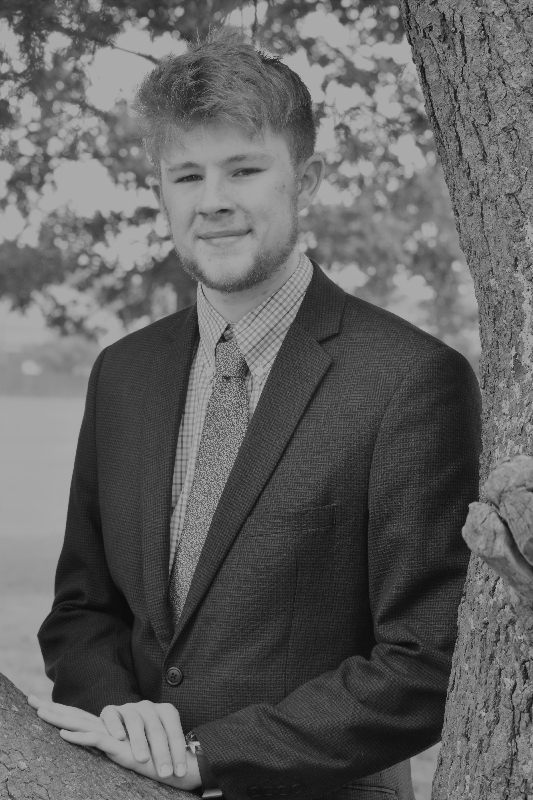 Aaron Moser is a Missouri Campus Correspondent with Campus Reform. He is a sophomore at the University of Missouri, majoring in Journalism and minoring in Political Science. Aaron is involved with MU College Republicans and Truelife Campus Ministries. Additionally, he is a producer and play-by-play announcer for KCOU 88.1 FM, the student voice of Mizzou Athletics. You can find his other articles along with podcasts at themosershow.weebly.com.