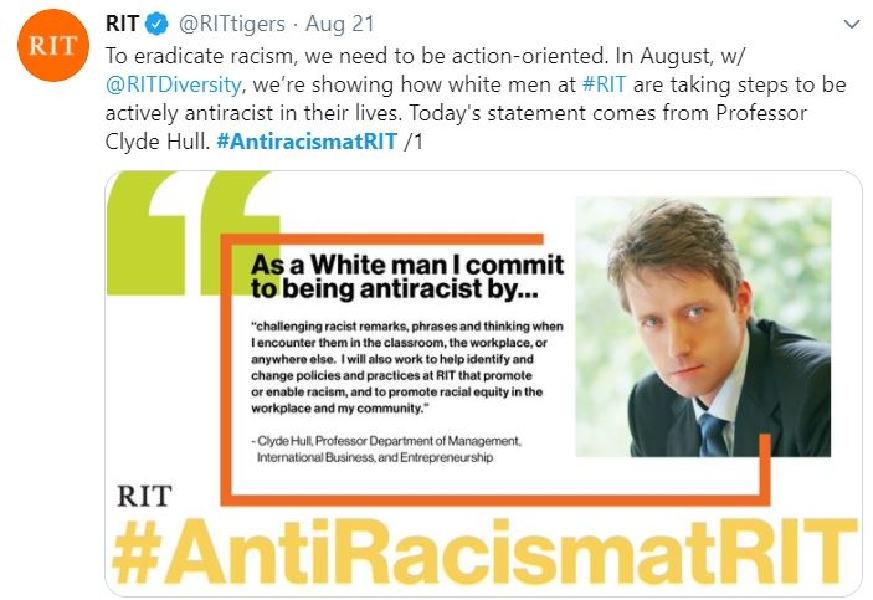 The Rochester Institute of Technology is challenging White men working as faculty and staff at the college to take the "anti-racism pledge."

According to a tweet by RIT, the social media campaign is "an effort to show how white men at RIT are taking steps to be actively antiracist in their lives," and will highlight how they show "commitments to diversity for the long haul in concrete ways" and demonstrate how faculty are trying "to provide more positive antiracist white men role models for our undergraduate population."

“I think RIT’s anti-racism campaign takes focus away from the bigger issues at hand right now in the world."

RIT director of Diversity Education Taj Smith explained why the Twitter hashtag #AntiRacismRIT is so important to the university and the antiracism pledges.

"I look at this as an opportunity (one of many) to call White folks into this collective work. I accept the complex work of both centering groups who have been disenfranchised from having a voice and supporting those who want to help end the larger problem," said Smith.

Matthew Houdek,  a lecturer in the University Writing Program pledged to commit to antiracism by “acknowledging that white supremacy and anti-Blackness will never die” until White people realize that their own actions “perpetuate racial inequalities and inequities.”

Assistant Director of Residence Life Sean Watson pledged to commit to antiracism by questioning how "racism intersects with the spectrum of biases that exist, from classism to transphobia to ableism.”

To eradicate racism, we need to be action-oriented. In August, w/ @RITDiversity, we’re showing how white men at #RIT are taking steps to be actively antiracist in their lives. Today's statement comes from Sean Watson assistant director of Residence Life. #AntiRacismatRIT /1 pic.twitter.com/z8jR7em553

Aaron Gorelick, a senior interpreter at RIT, pledged to commit to antiracism for multiple reasons, one of which included “acknowledging that being a white male comes with unearned privilege by way of wealth, safety, and education.”

To eradicate racism, we need to be action-oriented. In August, w/ @RITDiversity, we’re showing how white men at #RIT are taking steps to be actively antiracist in their lives. Today's statement comes from senior interpreter Aaron Gorelick. #AntiracismatRIT /1 pic.twitter.com/uUjdYJ4a9u

Nick Renzoni, a student at RIT told Campus Reform that the program seems to be taking the "focus away" from bigger issues.

“I think RIT’s anti-racism campaign takes focus away from the bigger issues at hand right now in the world. With the school spending millions in protection for students to return to campus during the COVID-19 pandemic, it is seemingly distracting to have resources wasted on a campaign that does nothing for the community” Renzoni said. “RIT is an incredibly diverse place with an openness for people across the globe, and yet this campaign tries to create a problem where one doesn’t exist by targeting White men specifically.”

Megan Combs, a senior at RIT, told Campus Reform that she doesn't believe this is the most effective way to root out racism.

“Identity politics, especially in recent years, has gotten way out of hand,” said Combs. “The whole idea of the anti-racist movement is going to lead to racism. The best way to get around racial differences is to avoid putting heavy importance on the color of one’s skin. Unlike what RIT is doing through their antiracism pledges, people should not be viewed as minorities or supremacists because of the color of their skin."