Professor Mark Rupert claimed he is “fair to all serious intellectual viewpoints,” but negated the validity of the viewpoints of Trump voters.

A Syracuse University professor emailed a memo to his class warning his students that he does not tolerate support for President Trump.

Rupert listed conservative commentator Dinesh D’Souza as a thought leader he does not tolerate. 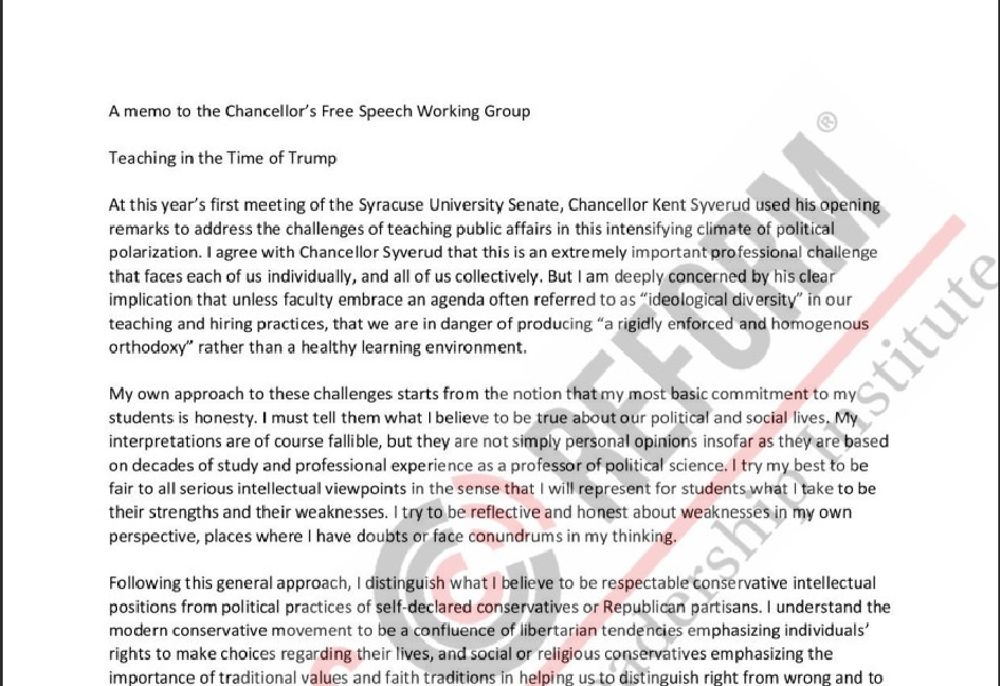 A Syracuse University professor emailed a memo to his class warning students about his approach to conservative views and "approach to teaching politics in the time of Trump."

In his email, Professor Mark Rupert who teaches the course “Critical Issues for the United States” distinguishes between conservative views he will respect and those he will not tolerate. "In particular," he wrote, "President Trump's racism, misogyny, and xenophobia are not just another political philosophy to be seriously considered and debated, but hateful ideas that we must be honest about."

In the memo he attached, Rupert claimed he is "fair to all serious intellectual viewpoints.” He listed the general beliefs in individual rights and traditional values as “intellectually respectable positions and historically significant in the foundation of the contemporary conservative movement.”

“But this is not the same as assuming that the contemporary Republican party is acting in good faith in its political practices," he wrote.

Rupert alleged that “the GOP has systematically used coded racial appeals to mobilize white voters since the era of the Civil Rights and Voting Rights Acts." He added that the party supporting Trump has "openly embraced racism and mendacity as the core of their politics."

“President Trump’s politics and policies are the culmination of a decades-long process of embracing racial divisiveness, hatred and fear as a partisan political tool,” Rupert continued.

He implied that anyone who believes otherwise is guilty of distorting history, listing Conservative commentator Dinesh D'Souza as an example of this. Rupert added that he regrets recommending students to attend a "fundamentally duplicitous" talk D'Souza gave at the university in 2016.

“It is therefore not possible to honestly discuss contemporary politics with students unless this decades-long politics of race baiting is named and documented with evidence,” he asserted.

In an interview with Campus Reform, D’Souza said that he suspects there were students who attended his talk and came back to Rupert with “all kinds of inconvenient questions that he couldn’t answer.” He suggests that it probably made Rupert’s life “miserable,” and that it is the reason he refuses to expose those ideas to his students again.

“He refers to my talk as duplicitous, but does not say one word about why," D’Souza added. "Presumably, if he could identify errors, or omissions or whoppers that I said, he should say what they are, but he knows that he can’t.”

Rupert argued that it is "not possible to honestly discuss contemporary politics with students unless this decades-long politics of race baiting is named and documented with evidence," and insisted that this challenge as an instructor is "now compounded by a President, and the political party supporting him, who have openly embraced racism and mendacity as the core of their politics. From the moment he stepped off the escalator to announce his candidacy, Mr. Trump has deployed racial stereotypes and scapegoating as political tools"

Rupert cited columns from The Atlantic and The Washington Post in his memo, as evidence to support his positions on both D’Souza and President Trump.

"If I am to honor my commitment to be factually and morally honest with my students, I must name this as a regime of racism, lies and demagoguery," Rupert concluded.

"To pretend that this form of politics is as respectable, or no more reprehensible, than that practiced by others would not be objectivity but a distortion of the truth in order to avoid controversy, a cowardly abdication of my most basic professional responsibility for which I don’t think I could forgive myself,” Rupert added.

D’Souza called Rupert’s statement “revealing apologia on the part of a left-wing propagandist for why he thinks this propaganda approach is actually justifiable.”

“There are lots of professors who practice bias and intolerance, but not many who seek to provide a justification for it. That’s what makes his letter notable and worth examining,” he continued.

D’Souza told Campus Reform that the mainstream of the Republican Party is pro-Trump, and that Rupert is excluding this point of view from consideration. He accused Rupert of “pretending there is another conservatism that is espoused by (Political Analyst) Bill Crystal,” while “writing off the conservatives who have actually produced an electoral majority in 2016.”

Syracuse Junior Carson Gambaro shared D’Souza’s frustration, telling Campus Reform that Rupert “should not be determining for his students whether the Trump administration is a racist demagogic regime.”

“If he thinks so, fine,” Gambaro stated, “But at a university, there needs to be encouragement of dissenting values so that more well-rounded conclusions can be arrived at through deliberative debate.”

Syracuse Freshman Mauricio Luna told Campus Reform that “college should be a place where people can share and respect different viewpoints without the fear of being targeted.” He said Rupert’s memo makes him “afraid” to share his ideas and speak out.

“It feels unfair that they make these horrible claims against Republicans and they don’t allow anyone to speak up to challenge these claims,” Luna continued.

Rupert originally sent his memo as a response to Chancellor Kent Syverud, opposing his creation of a campus “Free Speech Working Group” last Fall. This group is the chancellor’s attempt at fostering viewpoint diversity and protecting the First Amendment rights of both students and faculty on campus.

Campus Reform covered Rupert’s past behavior in March, when he was accused of targeting conservative students online.

Campus Reform reached out to Syracuse University but did not receive a response.

Justine Brooke Murray is a New York Campus Correspondent, reporting on liberal bias and abuse for Campus Reform. She is a senior at the Maxwell School at Syracuse University, majoring in Political Science. Justine is the Founding Chair of Syracuse University’s Young Americans for Freedom chapter and the former Chief of Staff for the New York Federation of College Republicans. She stood with President Trump at the White House when he signed the Ca…