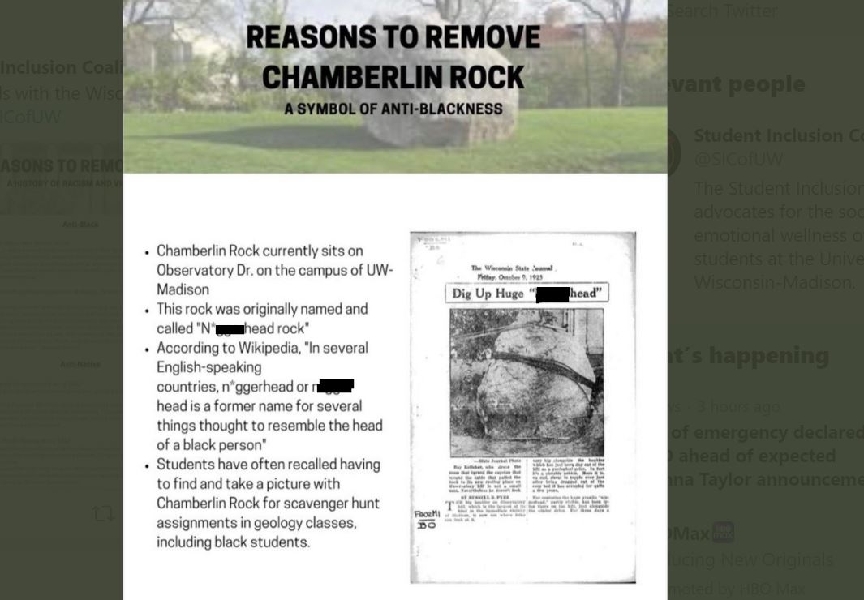 Students at the University of Wisconsin-Madison are demanding the removal of a giant boulder on campus, calling it a “symbol of anti-blackness.” In the 1920s, a team of men moved a large glacial rock to a prominent position on the school’s campus. The rock was named “Chamberlin Rock” after geologist and university president Thomas Crowder Chamberlin.

However, some colloquially referred to the object as “n***erhead rock,” a common term used to describe a large, dark boulder, at the time.

Calling it a “symbol of anti-Blackness,” the Student Inclusion Coalition of UW-Madison asked for the rock’s removal earlier in the summer.

Their rationale states that the term “n***erhead” was once a “name for several things thought to resemble the head of a black person.” They lament that “students have often recalled having to find and take a picture with Chamberlin Rock for scavenger hunt assignments in geology classes, including Black students.”

"...they are nothing more than photo opportunities for a university that refuses to do the bare minimum to ensure they are welcomed, respected, and included while on campus."

The group also called for the removal of a statue of Abraham Lincoln, labeling him "anti-Black" and "anti-Native." According to the list of "reasons to remove Abe," the sixteenth president and signer of the Emancipation Proclamation "was not pro-Black."

As Campus Reform previously reported, the university decided to keep the statue. However, UW-Madison students began pushing for the statue’s removal, the removal of Chamberlin Rock, and other policies in a Change.org petition that now has more than 2,900 signatures.

“The motto of the University of Wisconsin-Madison is to move ‘together forward,’” says the petition. “The University cannot and will not fulfill this promise if it continues to sustain an environment in which BIPOC [Black, Indigenous, People of Color] students feel as though they are nothing more than photo opportunities for a university that refuses to do the bare minimum to ensure they are welcomed, respected, and included while on campus.”

UW-Madison spokesman John Lucas told Campus Reform that the university “is in discussions with stakeholders over the potential removal of Chamberlin Rock.” However, there are no plans to remove the Abraham Lincoln statue.

Skylar Duensing, a student at UW-Madison, told Campus Reform that he has “never heard anyone” refer to Chamberlin Rock as “n***erhead rock.” He said that “despite what it may have been called in the past, removing it at this point would be nothing more than a capitulation to an angry group of people searching for another thing to be angry about.”

“I have never heard it called that before, to be honest,” Quincy Kroner, another UW-Madison student, told Campus Reform.