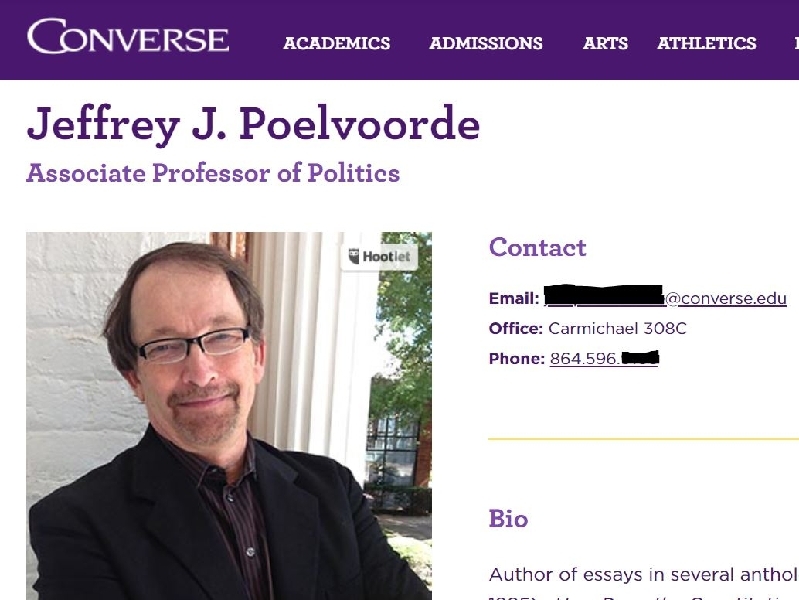 After a bureaucratic tug-of-war with administration, the South Carolina professor who refused to take mandatory bias training reports that he has kept his job.

Campus Reform recently reported on an associate professor at Converse College who was threatened with termination after publicly refusing to take university-sponsored diversity and anti-bias training. Jeff Poelvoorde recently told Campus Reform that he was not fired, and spoke at length about his experience.

“The industry that produces these materials is a fraud, and no serious studies indicate the efficacy or worth of such training."

Converse College President Krista Newkirk sent a notice to faculty in June instructing them to complete mandatory diversity and anti-bias training. Faculty were instructed to complete the "required" training by 5 p.m. on August 3.

Poelvoorde refused to take the mandatory training because the materials were “pernicious, an assault to the dignity and intelligence of the professoriate, in fact, an insult to anyone’s intelligence and dignity.”

“The industry that produces these materials is a fraud, and no serious studies indicate the efficacy or worth of such training. Enforced or otherwise, these materials have made the world we live in worse, for they substitute indoctrination and cartoonish 'training' for genuine education and thoughtfulness,” Poelvoorde said in a recent interview with Campus Reform.

Poelvoorde said that he actually offered to take the training “if the College would reverse the mandate and apologize to the faculty for its imposition,” but that Newkirk did not accept this offer.

When asked how he believes Converse College should have responded to the death of George Floyd, Poelvoorde said that he was “not certain that [his] college, or any institution of higher learning, was obligated to respond.”

Poelvoorde said he was puzzled as to why colleges decided to express “declarations of shock and dismay” over George Floyd’s death when the occurrence had no “linkage” to the institutions, adding “not to say that Floyd’s death was not reprehensible and should not be addressed by the Minneapolis authorities or the State of Minnesota.”

“[President Newkirk] simply assumed that ‘systemic racism’ explained his death, and that ‘unconscious bias’ or ‘white supremacy’ must therefore be present in all aspects and parts of American society, therefore also at Converse College and among its faculty,” Peolvoorde said. “Although it would not be irrational to suspect panicked virtue-signaling as the motive for my administration’s actions and the mandated ‘diversity and inclusion’ videos, I can grant that genuine dismay and indignation were behind their actions.”

The associate professor said that he received a great amount of support from students, colleagues, and academics around the world, noting that about 15 of his colleagues “expressed private support for [his] position and gratitude that [he] had spoken up.”

The only instances of backlash that Poelvoorde recalled were several colleagues asking to be removed from his mailing list and the student organization for which he is the faculty adviser unanimously voted to replace him.

“I graciously thanked them for the opportunity to serve them and congratulated them on finding a replacement as ‘devoted to students as I am,’” Poelvoorde said.

After the 5 p.m. August 3 deadline passed, Poelvoorde said that he experienced “several hours of anxiety and concern.” During that time, however, Poelvoorde received an offer that made his “life suddenly [look] completely different than it had three hours earlier.”

A group consisting of Poelvoorde’s friends in the academic world, supporters, and philanthropists banded together to create an Academic Award for Freedom. If Poelvoorde had been fired, this group promised to have presented him with this award as well as compensation for his legal expenses and two years of his academic salary.

Poelvoorde said that this consolation gave him more courage to stand strong and “relief from the fear that [his] means of support would disappear as a result of [his] decision to refuse to comply with the Administration’s mandate.”

Even though Poelvoorde was not fired, the “consortium involved is still considering an Academic Freedom Award of some sort and one to be awarded on a regular basis” according to Poelvoorde.

Poelvoorde told Campus Reform that he and his attorney Samantha Harris were “planning a full legal assault” had he been terminated.

“Without doubt, that would have garnered far more attention than the leadership of my College was willing to endure. It might have made for a more exciting life during these last several months and during the next year, but I am gratified to be back in the classroom which is the environment that I believe the Creator intended me to occupy,” Poelvoorde said.

When asked if he believed his firing would have had ramifications on academia as a whole, Poelvoorde said, “I believe my termination would have been a flare sent up in the dark, one that would have brought far more negative attention to the actions of my administration and might have had a wider galvanizing effect on other individuals and institutions. I believe, as do my supporters, that it was for that reason that the College backed down from their threat of termination.”

This experience has impacted the way Poelvoorde teaches students in the classroom. He is now offering two courses called Black Lives Matter I (Race from the Founding to the Civil War) and Black Lives Matter II (Race from Reconstruction to the Present). He will also be adding an “additional unit examining the claims of the ‘1619 Project’ AND its critics” in his Introduction to American Government course.

Poelvoorde will use these courses to show how he believes academia should approach the issue of racism. He wants “students to become knowledgeable and reflective by encouraging them to examine a variety of critical viewpoints on this issue.”

“These courses will lay in front of the student the changing challenge of race in American political life and examine the multifarious responses to it both with and outside of the African-American community,” Poelvoorde told Campus Reform.

When asked if he had any recommendations for returning to the classical teaching of the liberal arts, Poelvoorde said, “The derivative blend of careerism and ideology that now predominates in the academic world will unfortunately probably hold sway for the foreseeable future … All I can do is to continue to teach the best that I can...and, when push comes to shove, stand up for the things that I believe in.”