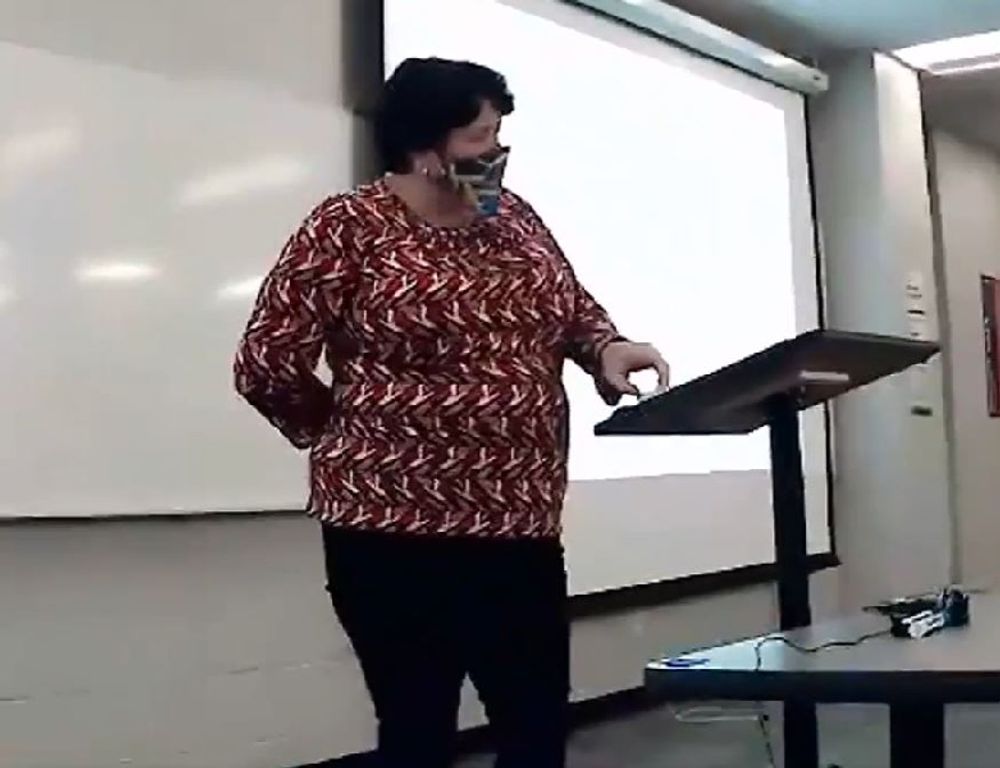 Gilley stated that Northwest Missouri State leadership decided to start the lecture series because this is a “watershed moment in the history of the United States’ civil rights movement and [they] all wanted to do something.” Additionally, she said the leadership wanted to “shed light on the injustices that we see in our current American society and to show just how embedded discriminatory practices are in American history.”

She revealed that the series “drew inspiration from the teach-in movement related to the anti-war movements of the anti-Vietnam War era,” with a goal of inspiring students to be “activist citizens” and “informed citizens who vote.” Gilley said that her Occupy Valk presentation is a “radical departure” from her lecture material in the Western Civilization I class she teaches at Northwest Missouri State.

One theme of Gilley’s presentation was the use of language and its impact on the West.

“Most people in our current culture are ignorant of, or indifferent to, how language can be used in our society and the most basic details of western history and even American history,” Gilley stated.

The central theme of Gilley’s presentation was the link between Western Civilization and white supremacy. At one point, Gilley pointed to an unnamed “scholar” who said that the phrase “western civilization is coded language for white supremacy.”

To guide the lecture, Gilley listed three questions regarding western civilization, two of which include “When does it begin taking on racist notions?” and  “When and why is it appropriated by white supremacist entities?” Gilley claimed that the connection of “whiteness” with “western civilization” is “incredibly clear” in the 1893 Chicago World’s Fair and the 1904 St. Louis World’s Fair.

“By the turn of the century, Western civilization is a product of the Greco-Roman world, it’s Christian, it’s nationalistic, and it’s starting to be very white.” She cited the 1904 St. Louis World’s Fair as the point in America’s history where “all of this [started] to come together.”

She stated that Filipinos were put on exhibit at the fair and then sarcastically cheers, “Go America.”

Gilley cited the “American sociologist and eugenicist” Edward Ross who wrote an article titled “Western civilization and birth rate” as an example of the early 1900s American thinking. Gilley states that his work “reinforces the idea that Western Civilization is white.” She also stated that the connection of Western Civilization with “white” was “cemented” in American politics and universities in the 1920s and 1930s. She says that “central to the idea” were  “white crisis authors” such as Woodrow Wilson.

“In another of his works, [Wilson] refers to the United States as a ‘Christian civilization’ in danger of a collapse unless it embraces Christ reinforcing both the Christian element and the possible white element,” Gilley said. Gilley also brought up Adolf Hitler, who she claims “was certainly embracing” the concept of Western Civilization because of his commitment to “racial purity.”

When discussing modern “white supremacist” organizations, Gilley claims that they use “Protestantism, nationalism, [and] racial purity as synonymous with Western Civilization.”  One slide pictured a map of the United States of all of the “hate groups across the U.S.” compiled by the Southern Poverty Law Center for 2019. States were color-coded based on the amount of “activity” the “hate groups” conducted.

“Why is it that these admittedly racist groups seem to be more in tune with the history of the phrase than most of us are? Is it because the so-called Western education system continues to hold on to an outdated educational legacy that speaks only to a group that is no longer the majority? Is it that our education system and our modern culture can devalue humanistic education in favor of more technical or narrowly focused disciplines? Or is it that Americans just don’t care about the words they use?,” Gilley questioned, adding that these are the questions that are “on her mind” as she teaches Western Civilization I at the university.

Gilley and Northwest Missouri State University did not respond to Campus Reform’s request for comment.