Campus Reform | After ECU admins shut down campus due to COVID, photos appear to show them at BLM protest

After ECU admins shut down campus due to COVID, photos appear to show them at BLM protest

TPUSA at East Carolina University is accusing administrators of "hypocrisy" for hosting and attending a large protest at the school. 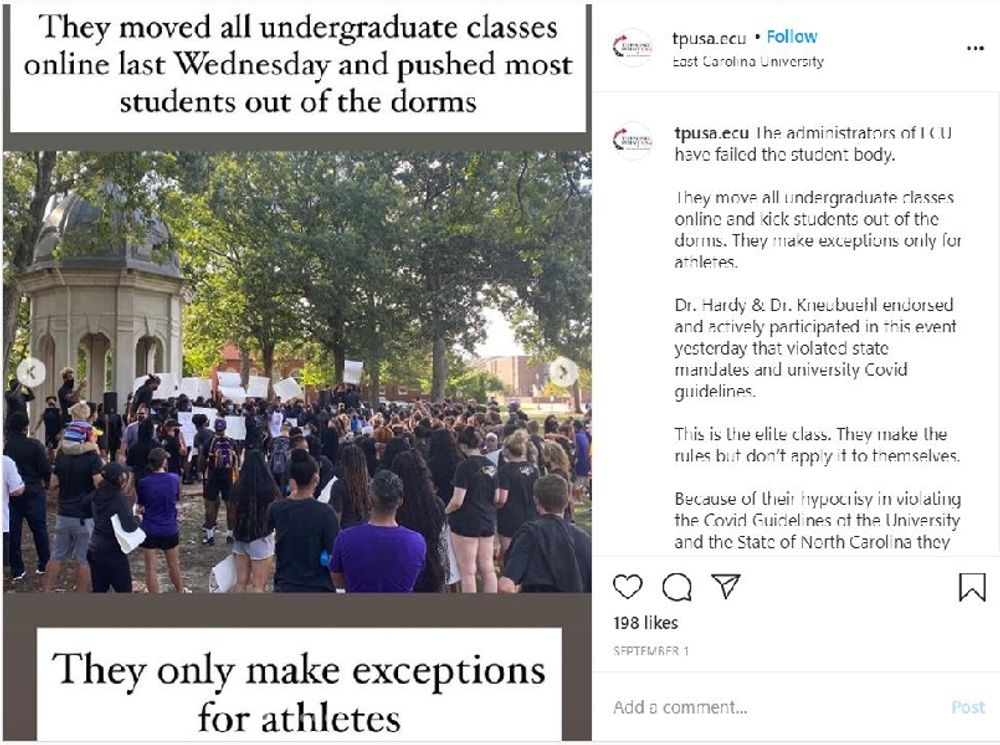 East Carolina University has sent home students living in the dorms and moved all classes online, but one conservative group on campus is calling out the university administrators for attending a Black Lives Matter protest.

An announcement from the university on August 23  told students that they must move out of the dorms and return home, which was immediately followed by another update from the university that officially declared all classes would be switched to an online setting.

The university claimed in its message to students leaving campus that these measures were taken because “the outbreak of COVID-19 on campus has affected our ability to continue our educational mission on-site."

Then, on August 24, an emergency notification was sent to students and staff that said that there were, “additional COVID-19 clusters identified on campus.” Specifically, the university said that there were, “clusters of COVID-19 cases within two residence halls on campus. There are currently six positive cases related to Jones Hall and six positives related to White Hall.”

However, a post surfaced on Instagram one week after students were told to leave campus and classes moved online, prompting allegations of hypocrisy from some on campus.

The administrators of ECU have failed the student body. They move all undergraduate classes online and kick students out of the dorms. They make exceptions only for athletes. Dr. Hardy & Dr. Kneubuehl endorsed and actively participated in this event yesterday that violated state mandates and university Covid guidelines. This is the elite class. They make the rules but don’t apply it to themselves. Because of their hypocrisy in violating the Covid Guidelines of the University and the State of North Carolina they have violated the trust of the students of Pirate Nation. We are calling for the resignation of Vice Chancellor’s Virginia Hardy and Erik Kneubuehl.

“The administrators of ECU have failed the student body. They moved all undergraduate classes online last Wednesday and pushed most of the students out of the dorm. This event gathered over 200 people for hours of close contact & no social distancing just days after the university moved undergraduate classes online because of COVID,” the ECU Turning Point USA chapter account stated.

The account noted the “hypocrisy” shown by university officials and students by saying how they were, “violating the Covid Guidelines of the university and the state of North Carolina,” yet they held the event anyway.

“Dr. Hardy & Dr. Kneubuehl endorsed and actively participated in this event yesterday that violated state mandates and university Covid guidelines. We are calling for the resignation of Vice Chancellor’s Virginia Hardy and Erik Kneubuehl,” the account says.

“This is the elite class. They make the rules. But don’t apply it to themselves,” said the post when referring to Hardy and Houston.

“It was probably unwise of them to allow this event to be held. But also it’s one of those freedom of speech, freedom of assembly type things. Maybe the school just didn’t want to infringe on the students rights,” he said.

“They probably felt that they had to hold the invite because to tell the students that they can’t hold the event would also cause controversy so I suppose I can see why they allowed the event to take place. At the same time though, if we are going to preach social distancing, we must abide by it at all times.”

ECU student David Gehrig told Campus Reform that he was surprised that the football coach was at the event.

“It’s strange that the football coach is there as well because he wouldn’t be someone I would expect to be at an event like that," Gehrig said.

“It really is bizarre that the administrators can kick so many students off-campus so quickly and then a little while later, host an event that violates COVID guidelines,” he continued. “I doubt there will be any sort of discussion about the event and I don’t think that anyone will be taking any faults for it either.”

Campus Reform reached out to the university and the administrators mentioned above but did not receive a response in time for publication.