Evidence from both pro-life and pro-choice organizations speaks to the contrary.

A Stanford Medical School professor stated that “very” late-term abortions and post-birth abortions are “not real.” 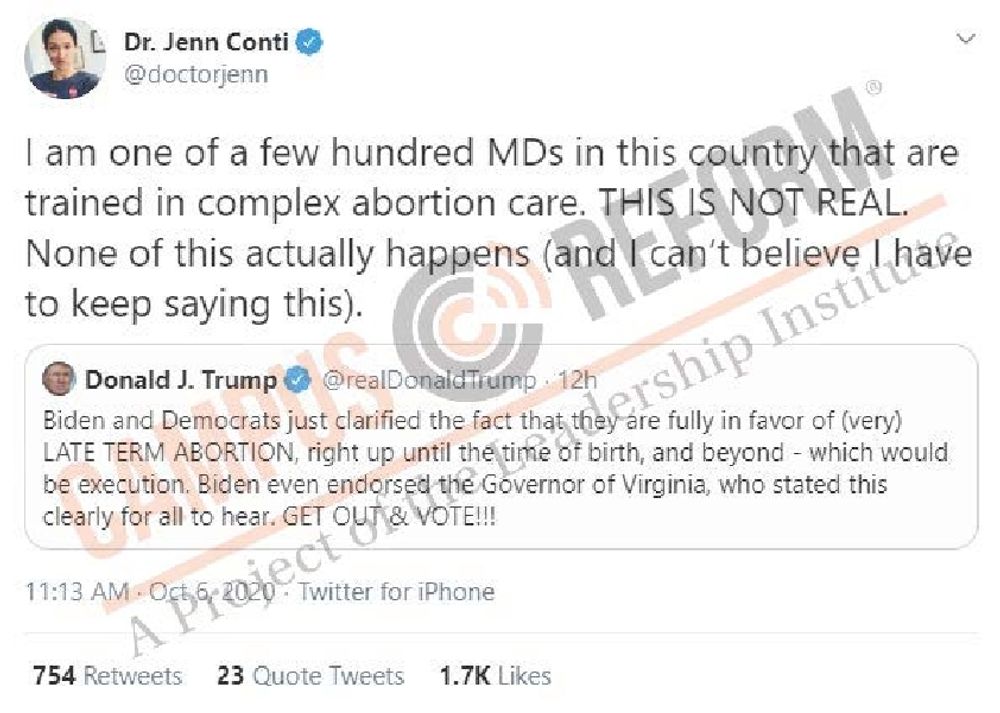 Jennifer Conti, an OB-GYN professor at Stanford Medical School, claimed that late-term and post-birth abortions are “not real.”

On Oct. 6, President Trump tweeted that Democrats are in favor of “very” late-term abortion, “right up until the time of birth, and beyond.” He then referred to comments by Virginia Democratic Gov. Ralph Northam, who has expressed approval of legislation legalizing abortion up to the moment of birth.

Biden and Democrats just clarified the fact that they are fully in favor of (very) LATE TERM ABORTION, right up until the time of birth, and beyond - which would be execution. Biden even endorsed the Governor of Virginia, who stated this clearly for all to hear. GET OUT & VOTE!!!

Conti quoted the president’s tweet, declaring that “THIS IS NOT REAL” and “none of this actually happens.” She has since deleted her tweet.

"I am one of a few hundred MDs in this country that are trained in complex abortion care," Conti wrote. "THIS IS NOT REAL. None of this actually happens (and I can't believe I have to keep saying this)."

Created Equal, a nonprofit that seeks to inform voters about abortion, told Campus Reform that “all evidence points to Conti not telling the truth,” as New Mexico, New York, and many other states allow abortion up to birth.

Created Equal External Affairs Assistant Lexie Hall pointed Campus Reform to the website of an abortion provider with sites in Nebraska and Maryland, which openly states on its website that it provides “abortion care throughout pregnancy, meaning 1st, 2nd, and 3rd trimester abortion care.”

This particular provider provides explicit details of how it performs abortions on pregnancies “25 weeks and up.”

Hall also referred Campus Reform to Jill Stanek’s February 2020 testimony to the Senate Judiciary Committee hearing on the Born Alive Abortion Survivors Protection Act. Stanek explained that she was a nurse in a hospital that regularly left babies who survived abortions in the hospital’s Soiled Utility Room until they died.

Live Action Director of External Affairs Alison Centofante pointed Campus Reform to an analysis of state abortion data, indicating that more than 100,000 late-term abortions may have occurred in a single year. In many states, second and third-trimester abortions account for up to 17 percent of all abortions, according to Live Action.

Campus Reform reached out to Conti for comment but did not receive a response in time for publication.