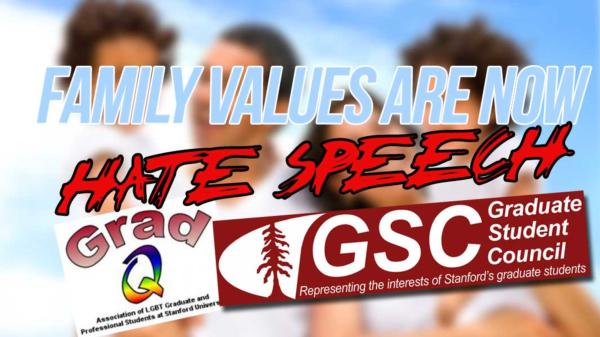 At Stanford University, silencing the voices of one student organization is apparently pertinent in order to protect the feelings of another.

The LGBT community at Stanford raised their voices loud enough at a recent graduate-level student government meeting at which the Stanford Anscombe Society (SAS) was requesting funding to host a conference centered around the organization’s mission—traditional marriage and family values. The upcoming conference, “Communicating Values: Marriage, Family & the Media” was deemed “hate speech” by the Stanford Graduate Student Council (GSC) at the provocation of GradQ, the queer graduate student organization.

“I feel really bad for the SAS members because they didn’t want to come across as bigots but their message is very much bigotry.” - Stanford student Brianne Huntsman

“The Anscombe conference was intended to teach people how to have secular conversations advocating for marriage to remain between a man and a woman,” Brianne Huntsman, a junior product design major, told Campus Reform.

Huntsman works for the LGBT center on campus, but campaigned against the GSC funding the conference outside of work. According to her, while the conference is slated to discuss how to debate in favor of traditional marriage, it is not an event that encourages dialogue.

“I’m so glad that GSC chose not to fund this event-because [sic] it shows the grad community (and the larger Stanford community) that Stanford is a safe space filled with people who work hard to make sure it stays that way,” the 23-year-old said in an email.

Huntsman and several other members of the LGBT community wanted to make it clear that while they did not support GSC funding the event, they were not advocating for the cancellation of the event altogether.

"That's not what the conservative media is saying and that's just shitty journalism,” Huntsman said.

According to Jeffrey Cohen, a graduate student in clinical psychology and vice president of GradQ, GSC retracted the funding because the conference is not free of charge and the venue would not encompass every single graduate student.

“There’s a huge difference between banning the event and deciding not to fund it,” Eduardo González-Maldonado, a member of GSC told Campus Reform.

Members from SAS and GradQ met in a closed-door, administration-attended meeting last week in an attempt to reach a compromise. While SAS students were open to GradQ’s proposal to co-sponsor an event, SAS refused to let an alternative event take the place of their already scheduled conference.

While GradQ students say the proposed co-sponsored event was never meant to replace the conference—but rather serve as an addition—several of Stanford’s LGBT student organizations will band together to host a separate event at the same time as the “Communicating Values” conference. Huntsman said the event will be offered as an alternative, not as a protest.

“I feel really bad for the SAS members because they didn’t want to come across as bigots but their message is very much bigotry,” Huntsman said.

The GSC voted 10-2, with two abstaining to deny the request of $600 for the conference speakers. A week before the students’ protest, the GSC had approved the funding with an 8-4 vote and only one abstention. The SAS plans to still hold the conference on April 5 by fundraising through outside organizations.

Representatives from Stanford University and SAS both could not be reached for comment in time of publication.