Outcry on Twitter over WWU president’s call for fewer whites 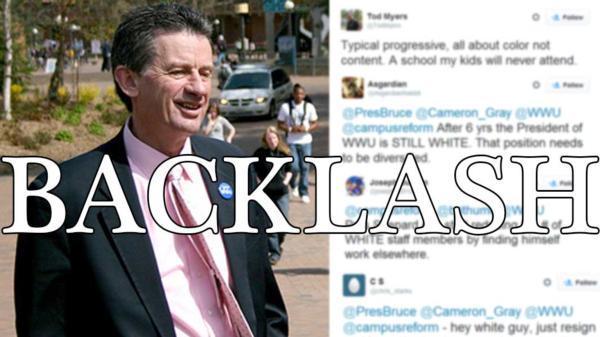 The Twittersphere is demanding the resignation of Western Washington University (WWU) President Bruce Shepard for repeatedly calling the number of white students on campus a “failure.”

After Campus Reform broke the initial story highlighting Shepard’s aversion to a dense white student population, people took to social media to solicit the resignation of the president who is white himself.

. @PresBruce Given your own mediocre whiteness, will you resign and allow a minority to serve as WWU's new President? #checkyourprivilege

A bevy of other tweets ensued, with many using the hashtag #defundWWU. The general consensus seemed to call for Shepard’s resignation citing the hypocrisy of his statements.

If @WWU's prez is white, he can begin solving the "problem" by resigning, in favor of a non-white. http://t.co/OR9sLqQHaU

While Shepard’s comments sparked outrage nationally, the issue hit closer to home for some, including Jeff Ogren, the father of a WWU freshman.

“[Shepard’s comments] are really offensive because I send basically $20,000 a year to this school and it makes me feel like my son doesn’t belong there,” he told Campus Reform in an interview. “It really makes me wonder what he’s going to do to get rid of the white students.”

Ogren saw the Western Today’s survey which asked “How do we make sure that in future years ‘we are not as white as we are today?’” and responded to the question online.

“I asked, why not admit based on merit and character? Why is race a factor?” he said.

A few weeks later, he has still not received a response.

“I don’t feel really too great about sending my money to a school that doesn’t want my son to be there,” Ogren said.

WWU has remained silent on the issue, instead directing those on Twitter or those calling into the office to Shepard’s January blogpost, the same one Campus Reform highlighted in the original article.

Ed. Note: This article has been amended since its initial posting.