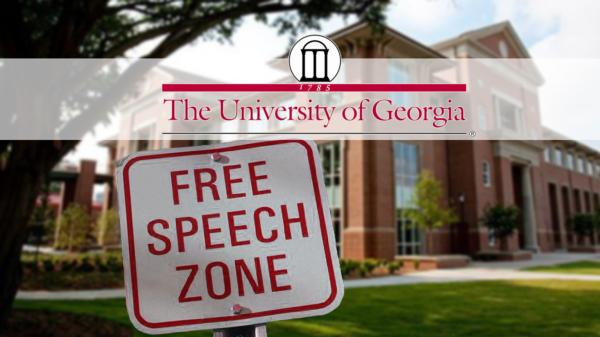 Alliance Defending Freedom (ADF) is suing the University of Georgia (UGA) on behalf of a student group over the university’s “speech zones”—or lack thereof.

According to ADF’s lawyers, UGA's “free speech zones” compose less than one percent of the main campus. UGA’s policy, posted on the school’s website, quarantines free speech to two areas: the Tate Student Center Plaza and the Memorial Hall Plaza, both of which are open to students Monday through Friday between 8 a.m. and 9 p.m. Still, approval to organize, demonstrate and display other forms of expression must be approved first by the Associate Dean of Students 48 hours in advance.

“Public universities are supposed to be the marketplace of ideas, and so they should promote and celebrate free speech, not quarantine it to less than one percent of the campus."

“Public universities are supposed to be the marketplace of ideas, and so they should promote and celebrate free speech, not quarantine it to less than one percent of the campus,” Travis Barham, ADF’s litigation staff counsel who is representing the group, said in a press release.

ADF is suing on behalf of the school’s Young Americans for Liberty (YAL) chapter, which wants to distribute literature on campus without retribution from university officials. In March 2011, the student group constructed a clock representing the mounting national debt. According to the students, the university prohibited them from displaying the clock in an area of the school that wasn’t a designated free speech zone despite other groups organizing in different areas of the campus.

A spokesperson for UGA told Campus Reform that the university was “not aware that it’s an issue here” in regards to free speech on campus and said he was also unaware of any pending lawsuit. He told Campus Reform permits are generally offered “the same day or the next.”

Earlier this week, students marched across campus in protest of the state forbidding undocumented students from attending state universities. The students, some from UGA and some from nearby Freedom University, banged on an administration building’s glass doors until the university president agreed to privately meet with the two leaders. It is unclear whether or not they had the proper permit to demonstrate.

The Foundation for Individual Rights in Education has given UGA a “yellow light” speech code rating. According to the non-profit, which focuses on civil liberties in education, a yellow light means the school has “at least one ambiguous policy that too easily encourages administrative abuse and arbitrary application.”

But Barham told Campus Reform that the issue of free speech zones on public university campuses isn't limited to just Georgia. He said he's seen universities try to limit free speech on campuses in states such as Oklahoma, Virginia and Maryland as well.

"It's flatly unconstitutional," he said in an interview with Campus Reform. "Students have the right to speak at public outdoor areas on campuses."

If ADF wins this case, it will have a positive affect on more than just YAL, according to the lawyer.

The lawsuit, Young Americans for Liberty at the University of Georgia v. Morehead was filed yesterday in the U.S. District Court for the Middle District of Georgia. Jere Morehead serves as the president of the university.

In 2008 ADF won a case against Georgia Technical University challenging the college's policy of limited free speech zones. Then a judge ruled that Georgia Tech didn't have the constitutional right to deem what speech was "intolerant" and couldn't limit free speech to just one amphitheater on campus.