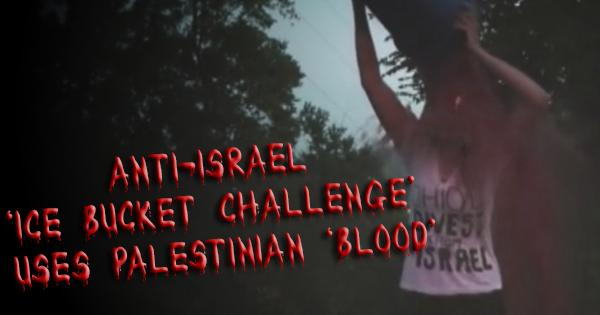 Megan Marzec, a senior at OU, accepted the charge from OU President Roderick McDavis to participate in the ALS Ice Bucket Challenge; but instead of dumping a bucket of ice water over her head, she doused herself in “blood.”

"I'm sending a message of student concern of the genocide in Gaza and the occupation of Palestine by the Israeli state,” she says in the video. “I'm urging you, and OU, to divest and cut all ties with academic and other Israeli businesses and institutions. This bucket of blood symbolizes the thousands of displaced and murdered Palestinians, atrocities which OU is directly complacent in through cultural and economic support of the Israeli state."

Marzec wore a pink shirt with the words “OHIO U DIVEST FROM ISRAEL” written in black marker during the video, which was made private early Thursday afternoon. However, Campus Reform was able to record a screen capture of Marzec's video.

After dumping the “blood”—which apparently was just tomato juice, water, and red paint—over her head, Marzec’s video cuts to a screen which says “Free Palestine” and encourages viewers to email her to bring the BDS movement to OU.

“On behalf of the student senate, we humbly apologize for the video President Megan Marzec posted,” the apology states. “Please remember that our focus, as your representatives, is, and will always, be to put ALL students needs first.”

On behalf of the student senate, we humbly apologize for the video President Megan Marzec posted.

Please remember that our focus, as your representatives, is, and will always, be to put ALL students needs first.

In a statement emailed to Campus Reform, the university disassociated itself from Marzec’s political stunt.

"To be sure, the Student Senate president in her video altered the original spirit in which President Roderick J. McDavis issued the ALS Ice Bucket Challenge," the statement, also posted on OU's website, says. "Her actions do not reflect the position of Ohio University or President McDavis. We recognize the rights of individual students to speak out on matters of public concern and we will continue to do so, but want to be clear that the message shared today by her is not an institutional position or a believe held by President McDavis."

Dylan Gustafson, a student at OU, told Campus Reform that he was offended and disgusted by Marzec's video.

"She took our university president's ALS Ice Bucket Challenge...and turned it into an extremely offensive propaganda stunt," he said in an email. "Student Senate is the most influential and visible student organization, not just on our campus, but any campus. As president, Marzec's actions represent our student body as a whole and she doesn't seem to understand her role as a leader for the university."

Gustafson said that the "student body is up in arms" about her video.

"I believe the outrage will continue until she resigns from her post or she is forced out because she does not embody the values and beliefs of the majority of the Ohio University students," he said.

Marzec did not respond to a request for comment from Campus Reform.