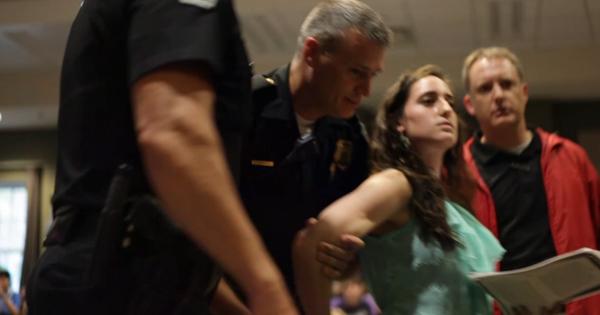 Four pro-Israel students at Ohio University could face jail time after their open floor speech in defense of Israel devolved into a shouting match between pro-Israel and pro-Palestinian students late Wednesday evening.

At the beginning of Wednesday’s student senate meeting, when the floor was open to the public, Bobcats for Israel President Rebecca Sebo addressed an anti-Semitic ALS Ice Bucket Challenge video created by the student senate president.

"You must stop or you will be removed by the police."

Last Thursday, Campus Reform reported that OU’s student senate president, Megan Marzec, dumped Palestinian “blood” over her head instead of ice water in a video accepting the challenge. Since then, multiple students, including some members of the student senate, have called for her resignation, and Marzec has received death threats.

Sebo condemned anyone who encouraged violent acts against Marzec, but called for her resignation as well.

“Attacking you was not the answer and would make our situation on campus worse,” Sebo said in a video posted by OU’s student paper. “I told them that you were my peer. That’s right. The president of Bobcats for Israel, who’s asking for your resignation, stood up for you because I care about your safety on this campus.”

In the video, Marzec can be seen yelling at students who are speaking and reading prepared remarks.

“You must stop or you will be removed by the police,” she shouts at one male student.

An adult male can be seen giving Sebo a two-minute warning and then counting down while she continues her speech before she was handcuffed and arrested by officers.

According to The Post Athens, student senate members led a chant with other students shouting “this meeting is being hijacked by fascists” and “shame on bullies.”

The Post also reported that Marzec stood on a table and said she would “never apologize for standing up for the people of Palestine.”

“And I will never stand up for fascists,” she also said. “And this body won’t either.”

An officer from OU’s police department directed Campus Reform to the department’s Twitter page where it had tweeted a statement about the incident.

“At approximately 7:15 p.m. this evening (September 10), officers from the Ohio University Police Department responded to Walter Hall for a report of people disrupting the regularly scheduled meeting of the Student Senate,” the statement says. “Upon arrival, officers instructed everyone to clear the floor of the Senate chamber so the meeting could proceed. Most people complied, but several did not. Those who did not were taking turns vocally disrupting the meeting and walking around on the floor of the chamber, thus preventing the meeting from proceeding.”

The statement confirms that the three other students arrested were Maxwell Peltz, 20; Gabriel Sirkin, 20; and Jonah Yulish, 19.

According to the police department’s statement, all four students were charged for a fourth-degree misdemeanor for disrupting a lawful meeting. That charge carries a maximum penalty of 30 days in jail and a $250 fine.

The four students were scheduled to make an initial appearance in court Thursday morning, but at time of publication, the police department was unable to confirm to Campus Reform any details about the court appearance.

Ironically, Marzec herself was forcibly removed from a board of trustees meeting more than a year ago and "arrested for the same offense," a university official told Campus Reform in an email.

In an email to Campus Reform, Sebo, 22, said Bobcats for Israel did not have a statement on the arrests at this time.

Marzec did not respond to requests for comment in time of publication. When asked for comment, an OU spokesperson directed Campus Reform to the campus police department's statement.