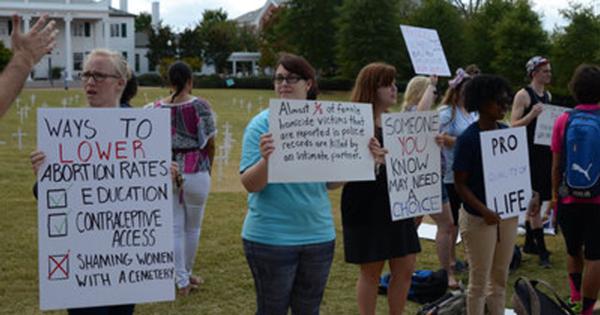 Pro-abortion students at Auburn University held a counter-protest on Wednesday against a pro-life display of crosses on the grounds that it was “misogynistic” and “sham[ed] women’s reproductive choices.”

Auburn University’s Students for Life (SFL) created a “Cemetery of the Innocents” earlier this week: 150 white crosses on the university’s lawn, each cross representing 20 lives lost to abortion. And it was those white crosses—not the pro-life message itself—that had another group of students up in arms.

"[The group of students] weren’t directly protesting against the pro-life argument, but they thought the display was shaming women’s reproductive choices."

“[The group of students] weren’t directly protesting against the pro-life argument, but they thought the display was shaming women’s reproductive choices,” Wesley Nelson, Auburn’s SFL president, told Campus Reform in an interview.

The demonstration isn’t about whether or not you agree with abortion, it’s about making people feel ashamed about their actions, Megan Skipper, an Auburn junior, told The Auburn Plainsman.

According to the Plainsman, the “Lives Lost to Misogyny” protest was a result of a men and masculinities class taught by Prof. Andrea Baldwin in the women’s studies department.

“I think these crosses are misogynistic because they’re shaming women for having abortions,” Imani Tucker, a senior, told the Plainsman. “We felt that since this happens every year, there’s a lot of misinformation and shame associated with a display like this and we wanted to counter that.”

However, Nelson said this is the first time he has ever been told that the white crosses are misogynistic. Auburn’s SFL group displays the Cemetery of the Innocents every semester, he said.

Auburn did not respond to a request for comment from Campus Reform.